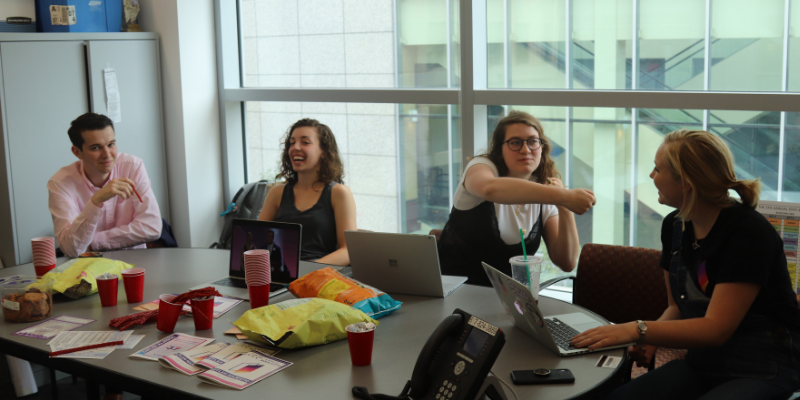 Emerson College’s new multipurpose building at 172 Tremont St. officially opened on Monday—the building was under construction, and the opening was delayed for most of spring 2019.

Approximately 400 students attended the grand opening and open house for the five-floor building filled with student organizations and meeting space. The open house was intended to foster camaraderie, according to Director for Campus Centers Joshua Hamlin.

Hamlin said the building is a collaborative space.

“It’s a great place for students, faculty, and staff to come together, whether that’s for meetings, whether that’s socially hanging out, if you need a place to study, or some quiet place to have a one-on-one meeting,” he said.

172 Tremont features seven conference rooms, four “pod” spaces for smaller meetings, a community kitchen, and the offices for The Berkeley Beacon, Emerson Independent Video, Student Government Association and The EVVY’s. Other student organizations have lockers for meeting materials and can book spaces for their meetings. The building will be open from 7 a.m. to 2 a.m. daily.

Freshman Will Shapiro said he is enthusiastic about the new building.

“The facility is fantastic—I feel spoiled by the new space,” she said. “It can be a really good place to study and come have mental health breaks.”

Sophomore Samantha Hodgdon said she is excited to use the new space.

“I’m a part of [Full Fathom Production] and I know we have a space in here, so I’m excited to get to use it,” she said.

Hodgdon said the building is a nice addition to campus and is well-positioned.

“[The building] is nice on a campus that doesn’t have it’s own central kind of thing,” she said.

Erik Muurisepp, Associate Dean for Campus Life, said the feedback from students has been positive.

“They like the idea of [dry-erase] walls, they like the spaces, and I think also just the brightness of everything, so It’s amazing,” he said.