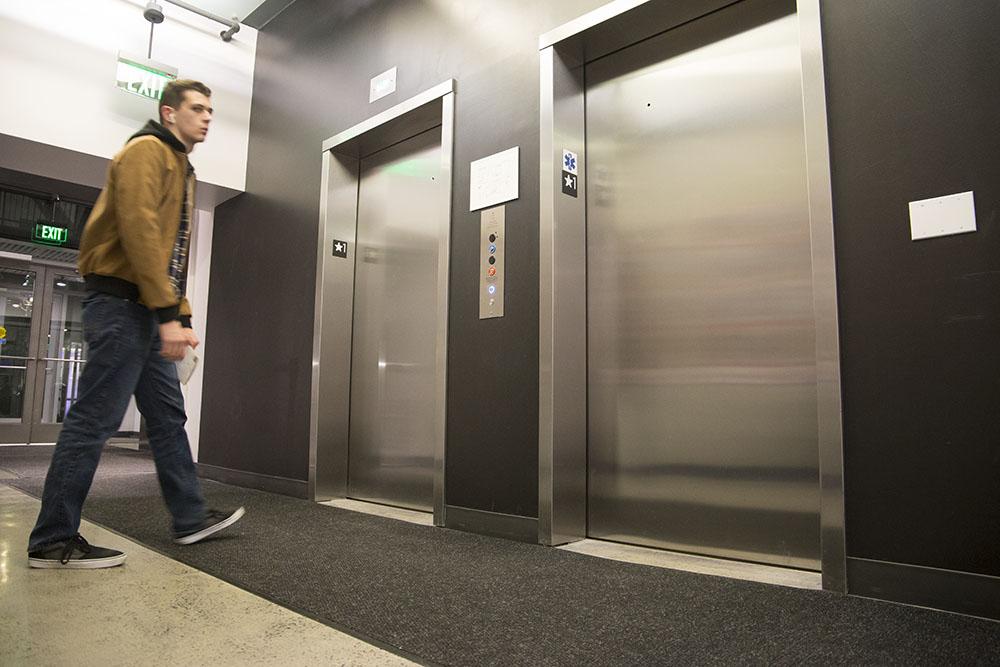 The first reported entrapment happened on Oct. 2, and lasted 30 minutes after a door controller malfunctioned.

The second entrapment was on Oct. 5 and lasted only five minutes. According to department records, it was caused by someone dropping a pen into the door track.

The students trapped in the elevator could not be reached for comment.

The facilities department also received a report of a clanking noise coming from the elevator on Oct. 2. The sound was caused by an elevator belt that needed tightening. The other three calls were complaints of major delays or stalls, said Duncan Pollock, the assistant vice president for campus services and facilities.

Freshman Josh Gorman lives on the 13th floor and said he attributes the ongoing issues with the elevator to the quick construction of the residence hall, which took 18 months. Earlier in the semester, the building’s built-in lamps had to be removed because of a report of a lamp catching on fire.

“It is pretty annoying,” he said. “It hasn’t gotten to the point where I have to walk up 13 flights of stairs all the time. But for a new building, to only have two elevators while other buildings like Piano Row or Paramount have three to four, there should be more elevators. I feel like I am always waiting for an elevator,” Gorman said.

Freshman Antonio Camasmie said the elevators seem to malfunction at least once a week.

“I think they are handling it well. It has never been an all-day problem … maybe an hour at most,” Camasmie said.

Pollack said engineers designed 2 Boylston Place with two elevators for safety reasons. The elevators run on a rest system designed to make each one operate an equal amount of time. If one elevator gets more operating time during the day, it rests during nighttime or low traffic hours, Pollock said.

All residence hall elevators work on a similar system, but it is more noticeable in 2 Boylston since there are only two, Pollock said.

An on-site elevator mechanic works at Emerson from Monday to Friday. Through the elevator company, there is a guaranteed one-hour response time if there are any issues with the elevators. If someone is trapped after hours or on the weekends, the Emerson College Police Department’s 24-hour maintenance staff reserves the right to open the elevator.

Director of Student Accessibility Services Diane Paxton said functioning elevators are vital to all members of the community.

“Individuals with mobility or chronic pain issues are disproportionately affected by not having them.” Paxton said. “For many of our community members, it is simply inconvenient to have to walk up the stairs, but for some of us, the stairs are not an option.”

Managing Editor Shelby Grebbin did not edit this article.