2020 in review: The biggest Beacon stories from a year marked by tumult 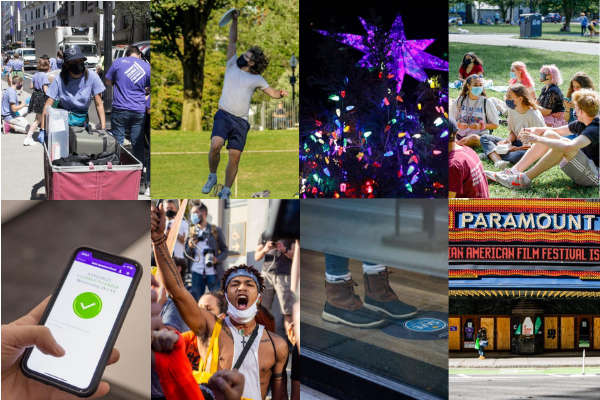 The Beacon documented campus life in a year that brought a pandemic, presidential election, and nationwide civil rights movement.

Call 2020 unprecedented. Isolating. Terrifying. But it’s one year no one will soon forget.

Emerson operated as normal for a few short months, abruptly shut down in response to the COVID-19 pandemic, and reopened for one of the strangest college semesters in history. Those who eventually returned to Boston in August were subject to weekly virus testing. They wore masks, strayed from large social gatherings, and substituted the “traditional college experience” for a sometimes-diluted educational reality. In the midst of it all, a nationwide racial reckoning began. A presidential election took place.

Here is a far-from-comprehensive guide through 2020 from The Beacon’s archives. If you’re feeling particularly nostalgic, maybe it’s time to re-read articles from a year that should be otherwise left behind.

[elementor-template id="60935"]
January
In the first month of the year, the words “coronavirus,” “quarantine,” and “pandemic” were not yet ingrained in our collective consciousness. It was perhaps our only month of normalcy in a year marked by the abnormal. The Beacon reported on the anticipated arrival of now-popular Little Building restaurants like El Jefe’s and Tatte. The Marlboro-Emerson merger drudged along, but drew harsh rebuke from Marlboro’s tight-knit Vermont community and alumni. A series of stories explained the scrawl of hateful graffiti—anti-Asian sentiments and then swastikas in a Piano Row stairwell—that covered parts of campus. The Student Government shook up its executive structure, adding five positions to its top leadership tier.

And the college had just an inkling we would actually have to worry about COVID-19. On the 25th, they advised “awareness.”
February
February started innocently enough: with security cameras in the Max. (Oh, how we now long for the days when our biggest problem was finding a way to successfully swipe chips without shelling out Board Bucks.)

Emerson filled a two-year vacancy for Title IX investigator by hiring Ryan Milligan, who now handles reports of sexual misconduct and discrimination. Then The Beacon uncovered potential oversights in SGA’s constitutional policy that called into question the executive treasurer’s eligibility in the organization. A larger story weeks after revealed further gaffes in the way SGA operates and elects its members. The Marlboro Board of Trustees hit the gas on their merger agreement with Emerson in an effort to help Marlboro students plot their futures. There was more racist vandalism in Piano Row.

Coronavirus crept closer to home at the end of the month. On the 24th, Kasteel Well students were forced to cancel travel plans outside of the Netherlands—one of the first COVID-related restrictions to directly impact Emerson students.

March
Welcome to the month that never ended. It is still March.

Most states were experiencing their first significant wave of coronavirus. In Massachusetts, hundreds of new cases popped up each day—many of them related to the Biogen Conference at the Marriott Wharf Hotel, one of the first superspreader events in America.

Kasteel Well students were brought back to Boston (and then sent home) as the pandemic swept through Europe. Gov. Charlie Baker declared a state of emergency. Emerson shifted all spring semester classes online. Almost everyone at the Boston and ELA campuses was instructed to leave. Those who stayed were stranded in  a desolate environment. Two Utah Jazz players tested positive for the virus after the team practiced on campus. Large events? Canceled. The NEWMAC sports season? Canceled. Graduation? Slated to be held online. The student population, whose lives were suddenly shaken by the virus, received partial refunds for housing—but not tuition. The circumstances were especially upsetting for Marlboro students, who had to prematurely bid farewell to their campus ahead of the anticipated finalization of the merger.
April
Workers cleaned up everything left behind on Emerson’s deserted campus, as students wallowed (and watched Tiger King) in the initial days of quarantine. With everyone at home, the college presidential working group released a batch of suggestions for ways to rework standing Title IX policy—and pushed back the timeline for the final report. And SGA overhauled its core structure,  creating avenues to pass legislation in a new constitution.

May
Several student activists took issue with the presidential working group’s suggestions on the college Title IX policy The administration was dragging their feet, they said. Administrators began to think about what the fall semester would look like (or not look like) through a community survey, and a newly minted Beacon Magazine documented a senior semester “cut short” by the pandemic.

In lighter news, the annual Evvys award show took place online. Students also found solace in Emerson Missed Connections, a popular Instagram page fueled by spicy anonymous submissions.
June
Large Black Lives Matter demonstrations overtook the city and the nation over the killing of George Floyd and other instances of police brutality. The next week, Emerson announced its plan to bring students back to campus for a flex-learning program that included both in-person and online instruction. But the plan was not well-received by some faculty, who told The Beacon they were not adequately consulted about the decision. Even so, the college braced for a significant financial blow—up to $76 million—for the upcoming fiscal year. Then, controversy struck the community at the end of the month when sexual misconduct allegations surfaced on social media against both a former professor and an alumnus.

July
By the middle of the summer, the shaky picture of the fall semester became clearer. Administrators relayed information about the upcoming semester piece by piece, email by email, despite a slew of faculty concerns. For a moment, a proposed ICE rule threatened international students’ ability to return to the U.S. for school at all.  And the ELA program was forced to begin online as COVID-19 case numbers stayed alarmingly high in California.

At long last, the Marlboro-Emerson deal came together. It seemed the tumultuous merger saga that underscored the desperate financial standing of some small liberal arts colleges  had at long last concluded. That was until controversy embroiled around the campus’ new owner: Democracy Builders.

August
Students from across the globe slowly made their way back to campus after it had remained nearly empty for almost five months. They received their first COVID-19 tests, quarantined, and munched on meal kits brought to their doors. Inevitably, Emerson saw its first positive coronavirus test result in the community since the spring before.  And Kasteel Well students once again saw their study abroad dreams squandered as the program was canceled for the semester.

A group of administrators and students  came together to redraft the college’s Title IX policy in response to new federal guidelines from the Department of Education. Here is the breakdown on what changed.
September
In the first full month of classes, professors and students alike waded through the physical and emotional limitations of pandemic-era classes. On top of it all, west coast students saw their states ravaged by record-breaking wildfires. Many unlucky pupils waited an unusually long time for textbooks that college officials claimed arrived on time. Emerson’s COVID-19 dashboard evolved until it was finally being updated daily, and administrators resolved to hold the entire ELA semester online in the interest of public health. The community also braced itself for another semester of hybrid learning, following a college announcement that drew mixed reactions.

October
With frequent testing and extensive restrictions, Emerson managed to keep COVID-19 numbers low as the city moved into the “red zone” of virus risk categorization. But discrepancies in total testing numbers and other metrics began to pop up in the college’s dashboard. A Beacon investigation found that the online service was in fact riddled with reporting and mathematical errors. Emerson also strengthened enforcement of its COVID-19 testing procedures, and new details about the way rulebreakers were sanctioned came to light.

The real highlights of the month? The first snow and Scooby Doo.
November
Joe Biden’s presidential win rejuvenated campus and the streets of Boston, which erupted in celebration the day of the decision. The election brought record voter turnout in Massachusetts, contentious rallies to the State House, and a sense of collective relief to the Emerson community. In other news, a Marine Corps reservist was charged in the 2019 death of Emerson student Daniel Hollis, and a guest emergency at the W hotel prompted the building to lock down.

Shortly after, COVID-19 cases at the college rose rapidly, though contact tracing suggested the transmission was taking place off campus. The surge sparked worry about the consequences of sending students home for Thanksgiving break and to their families.

December
The college was rocked by news of President M. Lee Pelton’s upcoming departure. He will take over as CEO of the Boston Foundation come June, according to a Dec. 1 announcement.

Now, as 2021 approaches, Emerson is “cautiously optimistic” about its financial standing, even as virus cases skyrocket nationwide. College working groups are weeding out the final suggestions to the Title IX policy to send to Pelton in the near future. Looking back on the semester, some serious complaints stand: several professors took issue with the “dehumanizing” process they endured to receive teaching accommodations, and communication regarding accessibility accommodations to and from the COVID-19 testing center was scant.

Just one day before the end of the year, a community-wide email said in-person instruction will not begin until Feb. 1, 11 days later than originally planned, in response to state guidance.