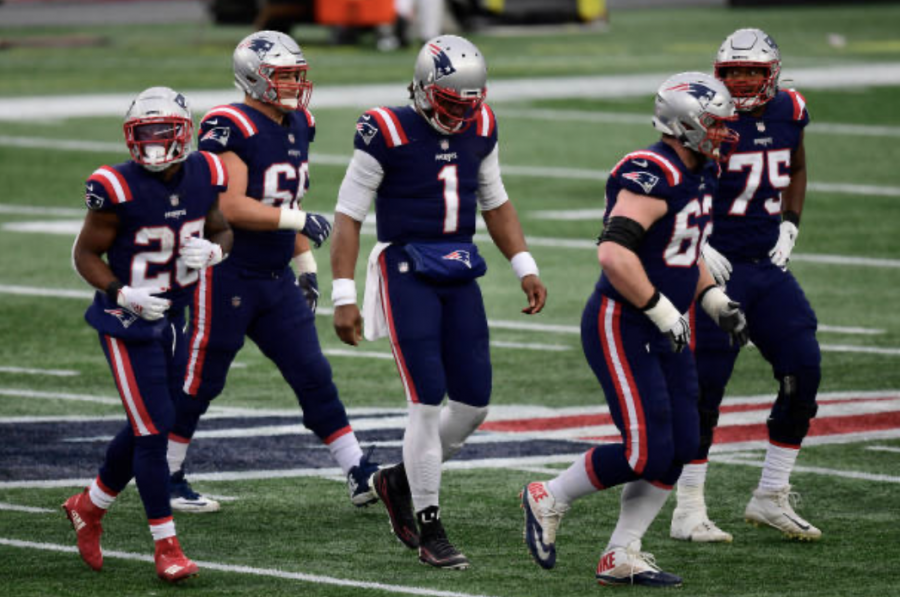 Following a 28-14 win against the New York Jets on Sunday at Gillette Stadium, the New England Patriots ended their season with a 7-9 record, a far cry from the 12-4 record last year.

For some Patriots fans, this serves as an “I told you so” if they thought the 2020 season wasn’t going to be on par with the last 20 years of Patriots football—especially given Tom Brady’s departure to the Tampa Bay Buccaneers last off-season. For others, a bad taste in their mouths lingers after New England got off to a solid start at 2-1, but then hit one road bump after another.

Now that this unenjoyable rollercoaster ride known as the 2020 Patriots season is officially over, let’s grade all of the position groups (spoiler alert: this isn’t going to be a report card to put on the refrigerator).

It was a solid move by the Patriots to sign quarterback Cam Newton to a one-year, $1.75 million contract in the offseason for a couple of reasons. One, they signed a former NFL MVP for basically nothing, and two, it’s just a one-year deal.

The experiment with Newton showed initial promise. The Patriots won two of their first three games and were a yard away from being 3-0 with Newton under center. Then, Newton tested positive for COVID-19 on Oct. 2 and missed Week 4 against the Kansas City Chiefs. When he returned, the experiment took a turn for the worse. New England could’ve won games against the Denver Broncos, Buffalo Bills, and Houston Texans if not for untimely turnovers by Newton towards the end of each game.

Backup quarterbacks Jarrett Stidham and Brian Hoyer didn’t play any better than Newton when he was sidelined, either—especially Stidham. The second-year quarterback from Auburn University saw plenty of playing time coming off the bench for Hoyer and Newton, but his overall performance really hurt the thought of him becoming the starter next season.

This grade was expected, and could arguably be even lower. For New England, finding a quarterback will once again be on the shopping list.

New England’s running backs carried the stagnant offense this season, but were also hampered by injuries. Second-year back Damien Harris was impressive in his 10 games with 691 rushing yards and two touchdowns on five yards per carry, per ESPN. Don’t be surprised if he’s the lead Patriots back in 2021.

Sony Michel dealt with another round of injuries this season that limited him to just nine games. When on the field, he ran for 449 yards and a touchdown on 5.7 yards per carry. Patriots fans know it’s all about health for Michel since the talent has always been there. He just needs to be on the field.

Dual-threat backs Rex Burkhead and James White both played key parts in New England’s offense. Burkhead netted 274 rushing yards, 25 catches for 192 receiving yards, and six total touchdowns before suffering a season-ending knee injury in Week 10 in Houston, per ESPN. White tallied 121 rushing yards, 49 catches for 375 receiving yards, and three total touchdowns. You couldsay this was a down year for White, but there are hardly any reasons to knock his performance given how poor the team was this season.

Both Burkhead and White are upcoming free agents. If I was New England, I would re-sign White and let Burkhead go, but there could always be a team that throws huge money at White.

This group ranked fourth in the NFL for rushing, according to ESPN. If each back was healthy, the ranking might have been higher.

This group had a tough go of it. While second-year receiver Jakobi Myers’s sound season of 59 receptions for 729 yards was a bright spot, New England’s receivers didn’t make a big impact. Star receiver Julian Edelman only played six games––with just 21 catches and 315 receiving yards––and was plagued by a knee injury. It wouldn’t be a shock if this was the 34-year-old Edelman’s last year as a Patriot.

2019 first-round pick N’Keal Harry had an up-and-down year with bursts of solid play and instances of head-scratching work. Next season will be his make-or-break year.

Off-season signing Damiere Byrd contributed nicely, snagging 47 catches for 604 yards and a touchdown, per ESPN. I wouldn’t mind bringing him back, but I can see him going to greener pastures.

This is another position where the Patriots can improve, and hopefully they’ll bring in the necessary help to boost the offense.

Knock knock. Anyone there? Anyone? Hello? New England’s tight ends were visible, but practically not there this season. This group accumulated 18 catches for 254 yards and a single touchdown, per ESPN. Yikes.

Sure, rookie tight ends Devin Asiasi and Dalton Keene played nine and six games respectively, but I really hope the tight end position finally comes around next season. Tight ends have played a role in New England’s offense for the last 20 years, and it’s troubling to see this position contribute nothing these last two seasons after Rob Gronkowski’s departure.

This is tough to grade because of how many different line combinations and injuries we saw throughout the season. Starting center David Andrews missed time with a hand injury that required surgery. Left tackle Isaiah Wynn played 10 games and dealt with numerous leg injuries.

One positive to come out of New England’s O-Line was rookie lineman Michael Onwenu. The sixth-round pick from the University of Michigan played all 16 games at multiple positions on the line and should be considered for a full-time role at either left guard or right tackle next season.

New England’s offensive line could see new faces next season as Andrews and starting left guard Joe Thuney will be free agents per Spotrac. Keep an eye on that, Patriots fans.

I merged these two together because they both get a C grade either way. On the one hand, you had guys like Chase Winovich (5.5 sacks), Adam Butler (four sacks), and Ja’Whaun Bentley (90 tackles) putting up decent numbers.

On the other hand, the front seven lost a lot of talent in guys like linebackers Kyle Van Noy and Jamie Collins and defensive tackle Danny Shelton to free agency, as well as opt-outs like star linebacker Dont’a Hightower. The D-line and linebackers were primarily responsible for the Patriots No. 26 ranking in rushing defense, per ESPN, after finishing sixth last season.

Hopefully with a full offseason, New England can make tweaks and see if young guys like rookie linebackers Josh Uche and Anfernee Jennings can earn more playing time next season.

The top New England defensive unit was the secondary, hands down. They contributed to the Patriots’ top 10 passing defense ranking in the NFL, according to ESPN.

Though he got off to a slow start and saw his season end early with a leg injury, star cornerback and last season’s Defensive Player of the Year Stephon Gilmore still performed well and earned his fourth-career Pro Bowl selection. Whether or not he’ll be a Patriot next season is uncertain, though.

No. 2 corner J.C. Jackson took a huge leap this season, snagging a league second-best nine interceptions, per ESPN, and was a Pro Bowl snub by all accounts. Yes, Jackson had some bad games filling in for Gilmore, but he’s still on the path of potentially being New England’s top corner of the future. Slot cornerback Jonathan Jones chipped in with two interceptions and 74 tackles.

Safety Devin McCourty continued leading the secondary with his usual top-tier play–catching two interceptions, including one he returned for a touchdown against the Seattle Seahawks.

Rookie safety Kyle Dugger also stood out with consistent production and physicality with 64 tackles. He’ll likely take on more responsibility for the Patriots next year.

The top Patriots personnel undoubtedly goes to the special teams. Second-year punter Jake Bailey put up awesome numbers, ending up in the top five in yards per punt and punts inside the 20-yard line, according to ESPN, earning him a Pro Bowl selection.

Veteran kicker Nick Folk scored 26 of 28 field goals, ending the season with 25-straight field goals. Folk stepped up when the offense couldn’t, including kicking game-winning field goals against the Jets and the Arizona Cardinals. A nice bounce back year for New England’s kicking game after a revolving door of underperforming kickers last season.

Future first-ballot Hall of Famer Matthew Slater is a special teams god year in and year out and should be a no-doubt selection to the Pro Football Hall of Fame when he calls it a career.

The 2020 Patriots were hot and cold. They had guys who showed up and balled out while others just didn’t work out for them. It was an unusual season of Patriots football on and off the field. Here’s to the 2021 Patriots, who with some potential luck, will be a better team in September. On to the off-season.