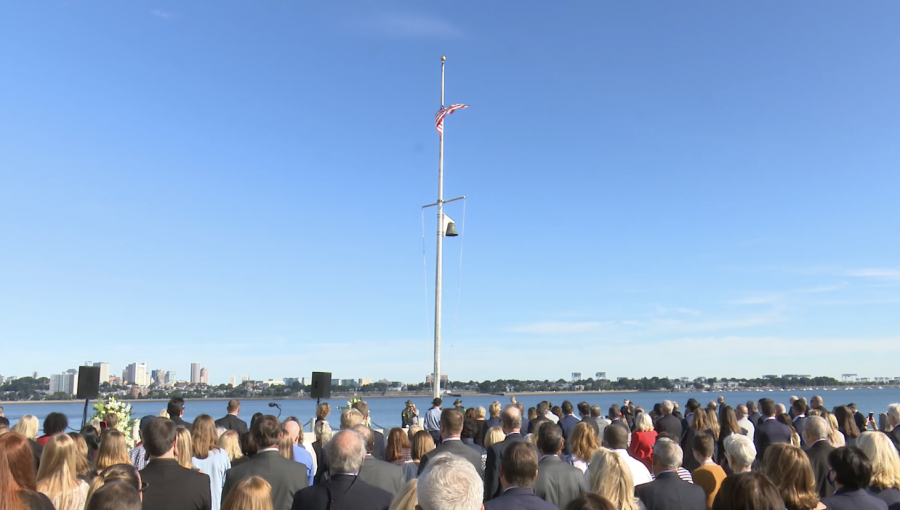 Attendees look on as the American Flag is lowered to half-staff at a memorial for the 20th anniversary of the Sept. 11 attacks.

As the country marks two decades since the terrorist attacks of Sept. 11, 2001, private citizens and public figures alike gathered across the city of Boston on Saturday to honor the lost lives of that fateful day.

Several different events were held across the city to commemorate the attacks that killed nearly 3,000 people—including an estimated 217 Massachusetts natives. Most visible among them was a vigil held by the Massachusetts 9/11 Fund at the John F. Kennedy Presidential Library. The somber ceremony was attended by city and state officials, including Massachusetts  Gov. Charlie Baker, Lt. Gov. Karyn Polito, and Attorney General Maura Healy, as well as Acting Mayor Kim Janey

The attendees held a moment of silence at 8:46 a.m.—twenty years to the minute that American Airlines Flight 11 first struck the North Tower of the World Trade Center—and the American flag was lowered to half-staff. Baker and other officials read the 217 names.

Among those who read names of those lost in the attacks was Sonia Tita Puopolo, an affiliated faculty member in Emerson’s communication studies department. Puopolo read the name of her mother, Sonia Mercedes Morales Puopolo, who was aboard Flight 11.

Karin Charles—family advisory chair of the Mass. 9/11 Fund—performed “We Remember Them” after the reading.

Following the outdoor ceremony, attendees headed inside to award the 2021 recipient of the Madeline “Amy” Sweeney Award for Civilian Bravery—named in honor of a flight attendant aboard Flight 11,  who relayed information to ground control regarding the hijackers.

“The Amy Sweeney Award for Civilian Bravery is named in recognition of my mother’s incredible acts of bravery,” Sweeney’s daughter, Anna, said.  “It celebrates life and the ability of the human spirit to reach beyond concern for oneself and act with concern for others—even in the face of potentially devastating consequences.”

Sweeney presented the award to Annette Szivos, who saved a man from drowning in Gardner, Mass. After Father John Connolly read a benediction, Janey concluded the ceremony with the annual laying of the wreath, invoking the memorial at Logan International Airport—where the two planes that later hit the World Trade Center departed from.

“As mayor of the great city of Boston, the American flags the airport workers placed outside of the gates on this day, 20 years ago, remain as a reminder of the spirit of our strength,” Janey said “And as we continue to battle our way out of a global pandemic, we cannot lose hope. We are in this together.”

At the conclusion of the ceremony, a tribute video to those who were lost played and family members reflected upon their losses.

“To date we have no remains of my brother John so I believe he is in the sunset,” Pat Hoban said of her brother, John Cahill. “For it is the particles in the ozone that make the sunset’s colors.”

“Jeff was a tall goofy guy and that’s how people remember him and that was one of the hardest things about losing him is that he was the laughter in the house, he was the fun parent,” Christie Coombs said of her husband. “You know, the house was very different afterwards. Probably my favorite things about him were his goofiness, his kindness, and just the way he loved me and the kids.”

“For people who are not twins … people who are it’s very hard for somebody to know what that experience is like growing up,” Mike Bavis said of his twin brother, Mark. “It was a unique experience to always have somebody there not only to be close with, but to push you, athletically and it turned out that was a part of our adult lives as well. It was important to us as a family like it was important to so many other families that they did something that impacted other people’s lives positively. One of the things that came to us in the days following 9/11 was how much Mark impacted young people, kids he coached through the summers, through junior teams, even in college.”

Also on Saturday, an American flag constructed of 50,000 notes written by school-aged children in the wake of the tragedy was erected on Boston Common.