The Berkeley Beacon • May 28, 2020 • https://berkeleybeacon.com/a-chat-with-evvy-awards-hosts-arasha-lalani-and-kyle-goold/ 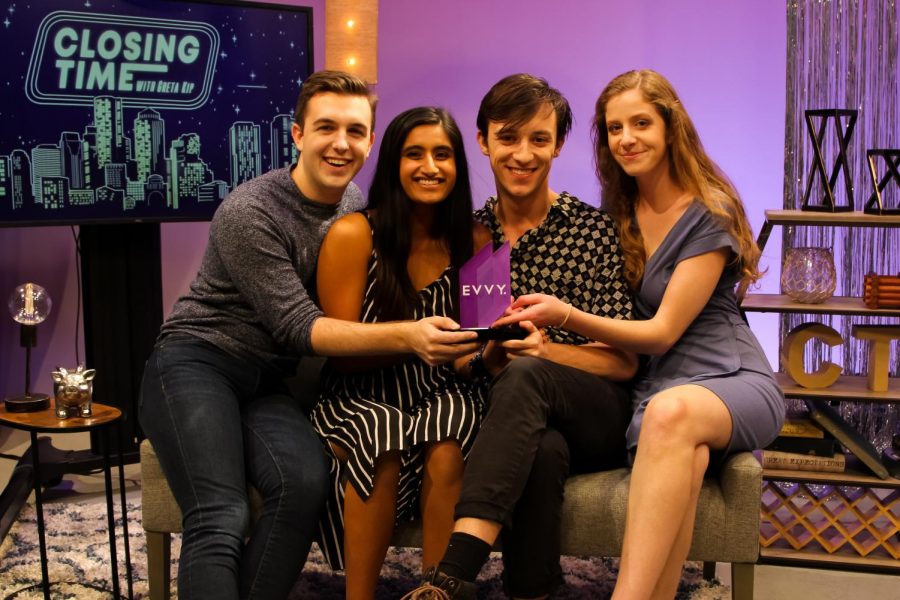 Kyle Goold (left) and Arasha Lalani (second from left) are set to co-host the 39th annual EVVY Awards show which is taking place virtually due to COVID-19.

Rising seniors Arasha Lalani and Kyle Goold dreamed of hosting the EVVYs ever since their freshman year. In October 2019, after an audition singing the Glee version of “Don’t Rain On My Parade” and “Before He Cheats” by Carrie Underwood, Lalani and Goold were cast as the co-hosts of the EVVYs Gala.

Every year, the EVVYs is split into two different shows—the Gala and Majestic—because of the abundance of awards. The shows occur on two separate dates with different sets of hosts. While they share an overarching subject and formatting structure, each show has its own specific theme, this year’s being “origin.”

Due to cancelation of the in-person event as a result of the COVID-19 pandemic, the EVVYs team decided to combine the EVVYs Gala and Majestic show to create one virtual event. Lalani and Goold worked with head writers, executive producers, and the Majestic show co-hosts Claire Layden and Matt Barrett-Miller to transition their scripts and roles as the hosts to an online format.

This year’s show is Friday at 8 p.m. EST. You can watch it here.

The Beacon spoke with Lalani and Goold on the phone to hear how the transition was for them. The article was edited for clarity and style, but not for content.

The Beacon: How different will this year’s EVVYs be from previous years?

Goold: I’m really really excited for people to see this year’s EVVYs. I think, yes it’s different, it’s virtual … I give a ton of credit to the executive producers and the writers and everyone who has worked on this transition to make it as one unified show as possible … We’ve never had just one EVVYs.

Lalani: I really love that perspective of one big show. A big goal that I had set for myself for the EVVYs was to try and make it something new, something different, and something unique, and that’s definitely what we achieved. Whether or not that was in our control, this EVVYs is definitely going to be one that is memorable.

The Beacon: Have there been any benefits to having the EVVYs go virtual this year, as opposed to in person?

Goold: Last year I went to the Gala and to the Majestic, and the Gala is really great because it’s during the school year so there’s a lot of students there. But because the Majestic production is so large they take a whole week after school to do it and sometimes that affects the attendance of students because a lot of students have moved off-campus and gone back home.

I think one exciting thing is there’s a pretty wide accessibility now that you can watch it from wherever… and I know that’s always been the case but I think because it’s really marketed as a virtual event people will be more likely to tune in online.

The Beacon: Usually the hosts bounce off each other telling jokes while hosting. How will it work with this year doing it online?

Lalani: I’m smiling thinking about it because we laughed so much as we were rehearsing, as we were saying those lines. I feel like we almost achieved that as we were pre-recording it and we were able to kind of laugh at each other and add in little things. So in a way we were kind of able to still achieve that banter, it’s just now recorded.

The Beacon: Were there any challenges that you faced in the process of creating this virtual EVVYs experience?

Goold: I think one of the really sad things for me was just before spring break, [Lalani] and I had done the readthrough of the full Gala script and it was really funny and made me much more excited to get up there on stage and do it with her.

I think we had to—and I feel bad for the head writers who worked on it—we had to part ways with a lot of really fun jokes and fun bits that just wouldn’t work online, so that was the other thing we were sort of dealing with: how does the script work virtually now?

The Beacon: What are you most excited for people to see at the EVVYs?

Goold: I am most excited for Emerson students to be celebrated and for their work to be seen. Specifically, I’m really excited for everyone to see the creativity that went into our virtual EVVYs and the fun Zoom jokes.

We haven’t been on campus in so long and I think it will be exciting for people to watch the EVVYs and be like, I’m reminded of everything that Emerson does have and it’s an awesome place that I miss a lot, and I think it will serve as sort of a good reminder of what’s waiting for us in Boston.

Lalani: I found myself really upset at first about how much, you know, as everyone is, it’s so challenging to think about, ‘Oh darn, what could’ve been’ and all of that. Instead of just dwelling on things that we can’t control, I think we can be appreciative and stay positive that the show really is still happening, it’s still going on, and I’m really excited to just be able to share with my family and all my friends and everybody that tunes in.