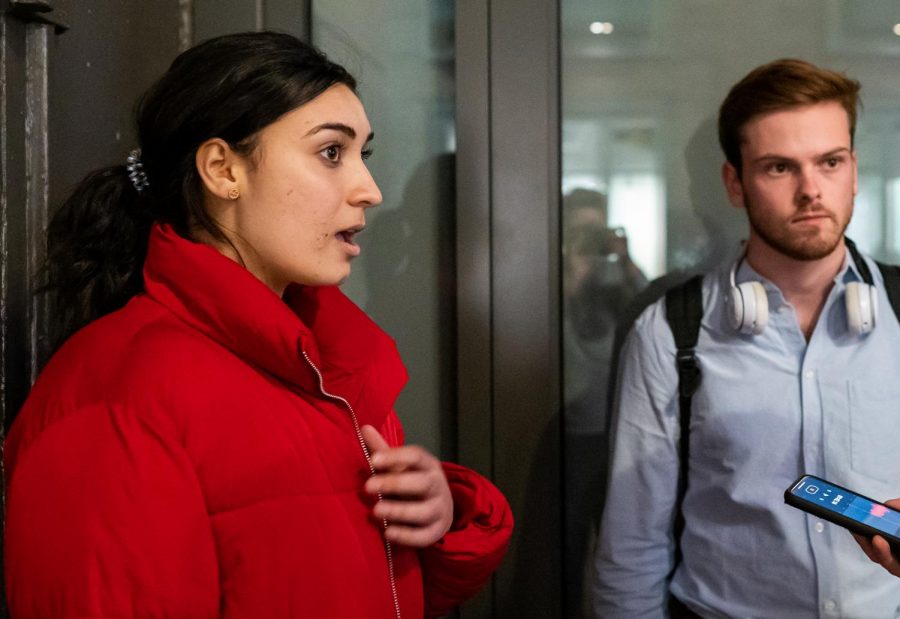 A mix of emotions gripped students Tuesday evening after President M. Lee Pelton announced the transition of all classes to remote instruction following the rapid increase in COVID-19 cases across the state.

The move fell in line with decisions made at other Boston-area colleges including Harvard University and Suffolk University to transition away from a typical classroom setting in an attempt to prevent further spread of the virus.

Emerson buildings will remain open until the end of the spring semester and students will have the option to stay in their rooms or leave campus, Pelton said in the email. He also said dining services will continue to operate, but hours will be subject to change.

While student reaction was mixed, some told The Beacon in interviews Tuesday that they agreed with the college’s decision with only three days left of in-person classes.

“I think [the college] is reacting perfectly and they took the correct precautions and I am glad they took the safety of the students as a priority,” Freshman Jake Carrier said.

Sophomore Sawyer Adamaitis said he expected the move after seeing the reactions of other Boston colleges.

“Overall, [I’m] not really that scared, I kind of worry for other people, though, like our sports teams and our organizations, how they’re going to settle it,” he said. “But I think that Emerson wouldn’t have done this if they didn’t have a plan.”

The decision to move to online instruction comes after Gov. Charlie Baker declared a state of emergency in Massachusetts Tuesday afternoon, announcing 51 new cases of coronavirus, bringing the state total to 92.

As of Monday night, more than 119,000 people in over 100 countries have been infected with COVID-19 and more than 4,000 have died, including 28 in the U.S., according to a COVID-19 tracker created by the Center for Systems Science and Engineering at John Hopkins University.

The decision to keep dorms operational was mostly well-received, but raised concerns among some students.

“I don’t think it’s very smart because the virus will spread more in the dorms than going to class,” Freshman Santha Rowles said.

Emerson’s announcement stood in contrast to other Boston-area colleges who chose to cease residential operations, drawing backlash on social media. Suffolk University, also transitioning to online classes, asked students living on-campus to make plans to move out of their “University-sponsored housing,” according to a statement from the institution released Tuesday.

Some Emerson students questioned how the online format would work moving forward.

“It’s going to be a new and frankly weird experience because, while technology is embedded in how we operate today, I don’t think a whole class dedicated to that will be very comfortable as just going to a class,”  Carrier said. “It may cause an issue for some students not attending classes or doing their work.”

Sophomore Alex Orfan questioned how Visual and Media Arts and other Performing Arts classes would make the transition.

“I’m mostly disappointed…I mean, you can’t make a short film online. So I feel like I just wouldn’t be getting my money’s worth,” he said.

“As a film major, I’m in a lot of production classes right now, so today I actually went out and I did a project with a camera on a tripod,” she said. “And that’s something I wouldn’t be able to do online. So I think kids are gonna start slacking off and not take it seriously.”

Junior Nick Heilmann said he feels the burden will be placed on professors rather than the students, citing the sparse use of Canvas, the program used by professors and students to share assignments, updates, and grades, by his instructors.

“Two out of the four of my teachers don’t even use canvas,” he said. “I think figuring out how to teach a course online is more difficult than I think it will be [for students] to handle. It’s all up to the teachers. Specifically, with acting classes, I think it’s going to be incredibly difficult.”