A look back on Joe Biden’s 2003 Emerson Commencement speech 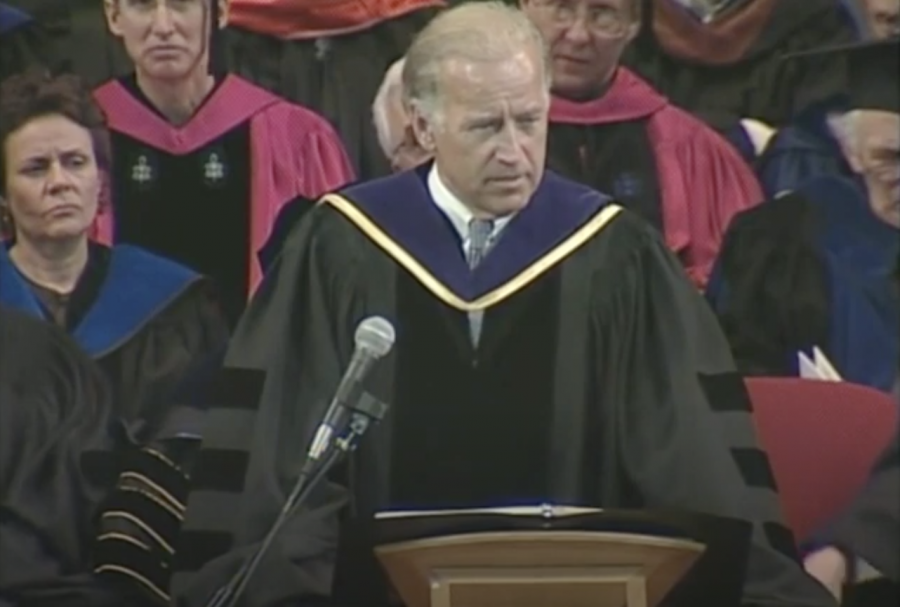 Joe Biden speaking to students at Emerson's commencement ceremony in 2003.

More than 17 years before Joe Biden became the President-elect, he received an honorary doctorate degree from Emerson and commended the college’s graduating seniors to “stand on principle and move to action” in his 2003 Commencement speech.

The then-senator of Delaware donned a black robe with a deep-purple collar while delivering remarks with a mixture of hope, humor, and political fervor. Today, mere hours after Biden surpassed 270 electoral votes, The Beacon rewatched the 34-minute speech.

The best part? He didn’t even think he should’ve been at the ceremony. “Denis Leary, Jay, Leno, Henry Wrinkler, and you got me?” Biden joked. “I don’t get it.”

Though the speech is a tad outdated, with references to “American Idol” and the newly-emerged digital age, it still holds words and weight from the man who is now the leader of the free world. Here are the biggest takeaways from the speech:

In his remarks, Biden referenced the historic events that happened between 1999 and 2003—the time frame during which most of the graduates attended Emerson. He brought up September 11th, the election of George W. Bush, and the start of the Iraq War.

The class entered college in a time of prosperity, he said, but were leaving it amid great uncertainty.

“The stock market was up. The Berlin Wall was down. The sky was the limit. Peace seemed inevitable. We were looking at government surpluses. The budget was balanced. We were filled with hope and optimism,” Biden remarked. “And then, the impeachment and disgrace of a president, and many other things being culminated, in your sophomore year, and September 11th, with the witnessing of an evil that most in our country thought was beyond our shores.”

He talked about his family

The long remarks are sprinkled with anecdotes on Biden’s family: his daughter, son, father, and mostly, his mother. From start to finish, the speech is centered around the lessons the President-elect learned from his mom, Catherine Eugenia Finnegan, who was then approaching her 85th birthday and has since died.

He made light of Finnegan’s reaction to his prior presidential campaign.

“She believed I could become anything I wanted,” Biden said. “She even believed I’d run for president once. She never thought I’d be dumb enough to try it twice.”

“It’s in our self-interest to be of service to our brothers and sisters,” he said. For his mother, “service wasn’t a career. It was an expectation, an essential part of living a meaningful life. In a sense, helping the guy next door is a uniquely American value borne out of the fact that we are a nation of immigrants.”

Later, he brought up his daughter’s graduation from Tulane University and his son’s hope to one day write a book.

He emphasized Emerson’s focus on communications and the arts

Biden repeatedly highlighted the role communicators, artists, and actors play in the world after college. In fact, the then-senator said commentators and writers have “great power” and “inordinate responsibility” on the way the world is perceived.

“The country will listen less to me or President Bush than it will a well-placed or well-time comment of Jay Leno or David Letterman,” Biden said.

He lauded the graduates for their precise visions and commitments to their crafts. Artists, Biden said, often know what they want to accomplish well before they even enter college.

“The most remarkable thing about your class is that you arrived here in large part possessing what most people go to college to find and that is, you know what you love, you know what matters to you,” he said. “Most of you are prepared to take a chance in pursuing a very difficult environment, a competitive environment, the craft that you know you love.”

He drew parallels to his 1968 law school graduation

An alumnus of Syracuse University, Biden graduated law school in a similarly unprecedented time. He recalled the impact the Civil Rights movement and the assassination of two of his heroes—Martin Luther King Jr. and President John F. Kennedy—had on him as a new lawyer.

“I know that you are today, very much as we were in 1968, anxious about the future and dismayed by uncertainty, wanting to do well, wanting to do good, and unsure about your chances of doing either,” Biden said. “You take your diplomas and enter a world that isn’t awesome in its chaos and complexity as it starkly beautiful in its seeming simplicity of its great technology.”

He offered words of encouragement and advice

Despite the trauma and turmoil that marred the graduates’ time in college, Biden maintained a spirit of forward-thinking hope.

“In this era of mass worldwide communication, people will take pride in making you and breaking you very, very quickly. And knowing who you are, knowing what you believe, and never allowing that understanding to weaken will always be your most enduring defense against life’s challenges and your own frailties. So let me say in conclusion, for better or for worse, this is the world you inherit…Let your generation be the one to bring us to a time when we stand on principle and are moved to action by the power of our words and ideals,” he said near the end.