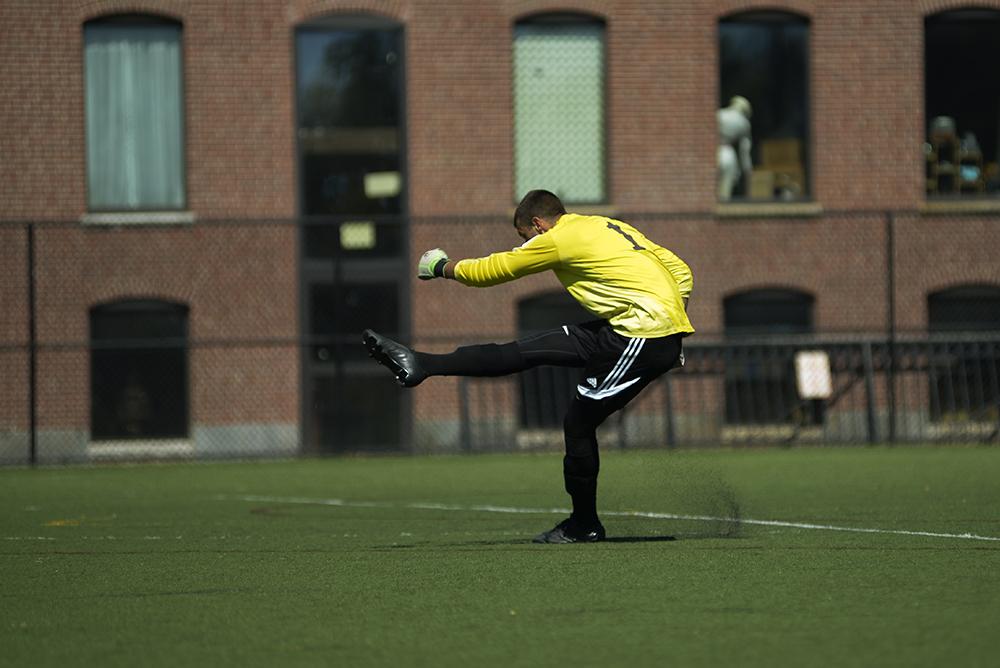 After 13 games, two overtime periods, and more than 1,170 minutes of gameplay in the New England Women’s and Men’s Athletic Conference, it finally happened.

On Oct. 25, for the first time in a NEWMAC game, the Lions did not lose. They ended their game against Clark in a 0-0 double overtime tie.

In the NEWMAC, points are awarded to teams for wins and ties to determine playoff spots. Losses are worth no points, and ties are worth one point. From the Clark game, the Lions earned their first NEWMAC point.

“It feels good; it feels better than losing,” said junior goalkeeper Carter Bowers. “It’s frustrating too, because we had opportunities to win, but at the end of the day a point is a point, and that’s our first NEWMAC shutout and point.”

Bowers, a journalism major, has the second-most saves in the NEWMAC. He said he saw improvement on the Lions’ backside this year.

“From my point of view, I thought the defense showed a lot of cohesion. I thought they moved and shifted really well,” he said.

Coach Jared Scarpaci, who now has 11 seasons as Emerson’s coach under his belt, also credited his team’s defensive performance.

“They have been keeping us in the game, locking it down and giving us the opportunity to win,” he said.

Scarpaci said he has seen a consistent improvement since the season began.

The Lions lost 10 games last year, while their loss total this year stands at seven, with one game remaining. Besides this improvement in their record, Scarpaci said he saw many other, more subtle improvements.

“We are more competitive in the NEWMAC this year, which is good,” he said. “Individuals have certainly stepped up throughout the year.”

But he added that the Lions’ offense is something that has to improve next season. The team ranks last in goals in the NEWMAC, with 23, despite ranking third in shots.

Bowers agreed with his coach’s sentiment.

“We need a go-to guy who can get us a game-winning goal,” he said.

Scarpaci said the Lions plan to make improvements to their offense and overall skill level in the offseason.

“The fitness level could have been better. We were fit by the end, but [by then] it’s too late,” he said.

Despite the team’s losing record, it was competitive in many games this season. Including non-conference matches, six games went into overtime, resulting in three ties, two wins, and one loss.

Two of these overtime games were against Eastern Nazarene College and the Coast Guard Academy, the former of which is not part of the NEWMAC. In overtime, the Lions defeated Eastern Nazarene with a goal by junior Berklee College of Music student Dan Knight, but ended up falling to Coast Guard.

Knight, a music production major, said the Eastern Nazarene game was a big team win, but said it meant less because it wasn’t in the NEWMAC.

“Every NEWMAC game is tough. Every team is nationally ranked,” said Knight, a forward. “Every game is winnable, but every game you have to play your best.”

Matt Zani, a junior midfielder, said he and his teammates are already setting goals for the Lions’ third year in NEWMAC competition.

“[Next season, we will] take the experience that we’ve had from the past two seasons and really channel it,” said Zani, a marketing communication major, “and perfect our style of play, and hopefully the results will show down the road.”

Overall, the Lions have a 6-7-4 record. They have a final chance to get a NEWMAC win when they face Babson on Nov. 1, their last game in the regular season.

“[There is] no longer the fear of the unknown,” said Scarpaci. “We’ve played all the NEWMAC teams, we know what they have to offer. There are no more surprises.”