Abandoning creative pursuits in the name of success 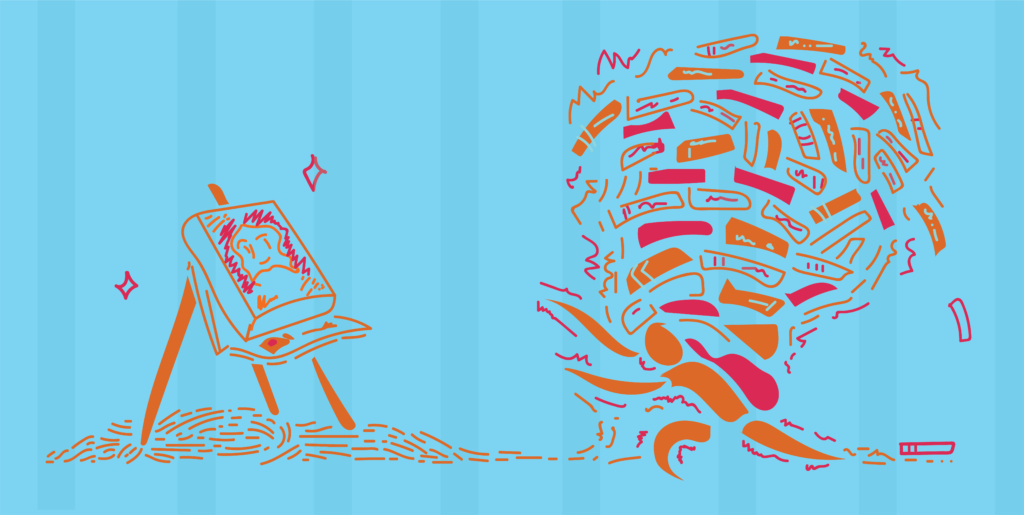 "Children with pursuits that aren’t conventionally 'academic' should not be discouraged from pursuing what they love." / Illustration by Ally Rzesa

I started playing the piano and taking painting and drawing classes outside of school at age nine. In eighth grade, I studied art history for the first time and aced my final exam on Italian Renaissance art. Freshman year of high school, I packed my schedule with printmaking and figure-drawing classes.

However, if someone had asked 15-year-old me what I wanted to study in college, I would have replied, “Business, probably.”

Children with pursuits that aren’t conventionally “academic” should not be discouraged from pursuing what they love. In my case, and I assume in many others, studying something I didn’t feel connected to or passionate about did not make me more successful—it just made me feel more discouraged.

After freshman year of high school, I never took another art class. I quit my piano and visual art lessons to focus on my schoolwork. Even though I loved and thrived in my art classes, I still filled my schedule with more “beneficial” classes, like Advanced Placement and honors-level math and sciences. I didn’t excel in upper-level STEM classes at the age of 16, and I felt unintelligent because I couldn’t do calculus. My brain just worked in a different way.

From a young age, the programming at my school subtly told me that pursuing the arts as more than a hobby would be detrimental to my academic life. In sixth grade, my school severely cut our language department and music offerings. They pared down the language department to offer only Spanish, and music classes became only extra-curricular activities. The atmosphere of my high school did not help my feelings of discontent in what was “accepted” to study either—my school offered over 10 STEM classes in the AP curriculum, but only four in arts and humanities.

Since the financial crisis of 2008, over 80 percent of schools nationwide have suffered budget cuts, which have affected mostly arts and humanities programs. Additionally, with the introduction of Common Core learning standards in 2010, these programs began to be seen as less important by school districts and were often cut. According to The Quad, “Music and other fine arts ‘electives’ are often the first to go.”

Art history and English consistently top online listicles of “useless degrees,” because capitalism deems anything not profitable as useless. I come from a lower-income family, so I understand the value of securing a profitable job post-graduation. As a high schooler, I saw a business degree as a safe option because it made money. A financial analyst in Boston makes an average salary of $65,000 per year according to Glassdoor, while a professional with an English degree typically makes around $36,000 as reported by the National Association of Colleges and Employers. But I had a hard time reconciling this reality with my creative passions.

In reality, art education is vital to the success of students pursuing any field, and it must continue to be funded and uplifted nationwide.

I ultimately decided to major in journalism, hoping I could fulfill my creative desires through writing and still enter a respectable industry. I wasn’t happy with my studies after a year in the program, but it took me another semester of sitting through classes I didn’t enjoy before I could justify switching my major. The negative beliefs around artistic fields were so ingrained in my psyche that I felt like I was sabotaging my future career prospects by giving up journalism to study art history instead.

That thought wasn’t necessarily true—there are career prospects in artistic fields. I interned at the Isabella Stewart Gardner Museum over the summer and met so many people who studied art history and built a career from it. Entry-level jobs in an art museum can earn around a $40,000 yearly salary. And even if jobs in these fields make less money yearly, they shouldn’t be written off as “useless.” Now, I see passion and happiness as a greater success than monetary value.

A year following my major switch, I am happier than I ever was studying journalism. I genuinely love my art history classes, and I finally feel curious and intellectually stimulated again. I stopped creating art for years, and rediscovering that creativity was difficult and took some time. I wasn’t used to flexing that muscle because I had repressed it for so long, but this year I’ve finally gotten back into painting, linocut printmaking, and drawing. I’ve also shaped my courses around those interests—this semester, I signed up for my first visual art class since I was 15.