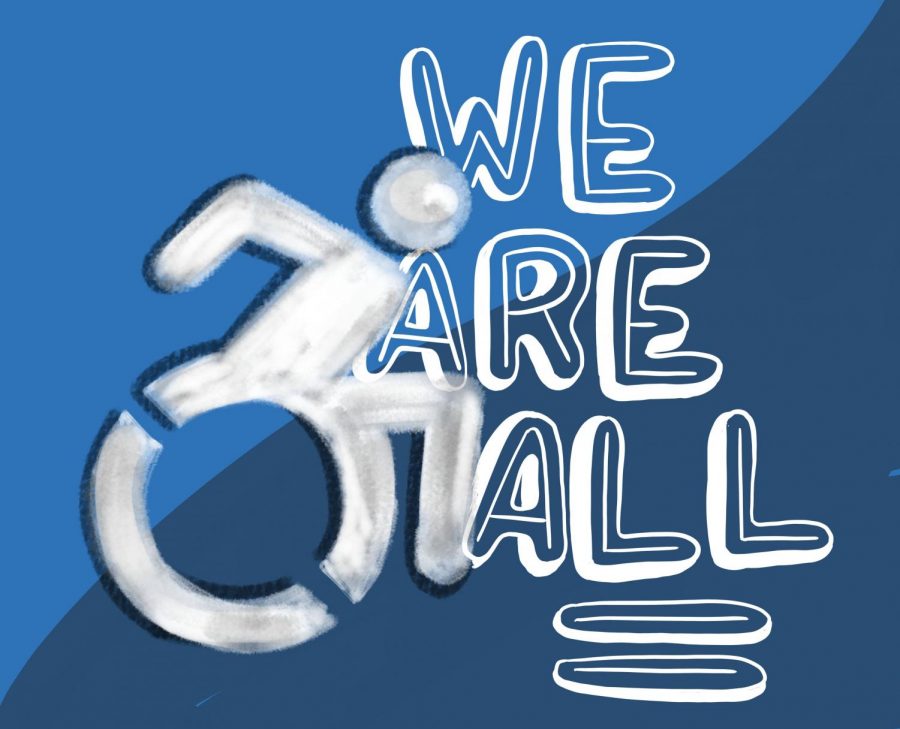 In 2009, Spread the Word gained traction in the public school system of Colchester, Connecticut, my hometown, as well as in schools across the country. The campaign spread awareness about the derogatory and negative connotations that the “R-word” holds towards people with cognitive disabilities, and it encouraged people to sign a pledge to stop using it. By 2020, the global campaign gained over 800,000 online pledges, according to its website.

The impact of the campaign is undeniable, but what about all of the other ableist slurs that remain embedded within our everyday language and culture?

Over the past decade, the use of the “R-word” decreased, however ableist slurs such as “crippling,” “handicap,” “differently-abled” and “wheelchair-bound” remain normalized in our language with complete disregard for the negative connotations they hold toward disabled people, and this needs to be addressed by society.

As a member of the disabled community, I’ve always felt uncomfortable seeing these slurs used in conversations, written in books and being thrown around as playful insults between my peers, but because they were so widely used, it was difficult for me to pinpoint why it made me uncomfortable. Unfortunately, this normalization remains because of the lack of awareness surrounding the trauma disabled people face in relation to these slurs.

I first became aware of the slur “cripple” in elementary school while watching the 2009 movie adaptation of A Christmas Carol. The original book, published in 1843 by Charles Dickens, refers to Bob Cratchit’s son, nicknamed “Tiny Tim,” as a cripple. During the 19th century, slurs with a variation of the word “cripple” were even more normalized than they are today. However, in the modern age of movie adaptations, the characters still refer to him as a cripple, even though it is an outdated term. Whenever I watched the movie, I got the sense that calling the character a cripple portrayed him as inferior, stemming from an able-centric place of pity, a reflection of how all abled people view disabled people. Consequently, I felt as though I was also viewed this way by those around me.

When I hear the word “handicap” used in conversations, it’s usually in reference to the reserved parking spots or to refer to a specific disability. Most people, however, don’t understand the negative implication surrounding this word. On Feb. 5, 2020, former Vice President Joe Biden reflected on his struggle with a stutter throughout his childhood at the CNN Presidential town hall. “You know, stuttering, when you think about it, is the only handicap that people still laugh about,” Biden said.

Putting aside the inaccuracy of his statement, he should have avoided the term “handicap” because “disabled” is the preferred and politically correct term.

When I hear people using ableist slurs, they’re usually not in a hateful context. With the word “crippling,” I normally hear it used in conversations to describe mental illnesses, such as anxiety or depression, as a way of emphasizing the intensity of their illness. However, people can describe their mental illnesses without offending other communities. For example, instead of saying “crippling anxiety,” they can say “overwhelming anxiety.” Similarly, ableist slurs can simply be replaced by more politically correct terms. “Accessible” should replace “handicap,” “disabled” should replace “differently-abled” and “wheelchair-user” should replace “wheelchair-bound.”

Even if the use of ableist slurs isn’t always used as an attack on disabled people, the lack of awareness about them further permits their normalization in our culture and language. Consequently, they act as a microaggression that ultimately adds to the ableism faced by an already marginalized community.

Today, society is making strides in omitting the slurs and outdated terms that have a history of offending marginalized communities. The disabled community deserves that same respect.