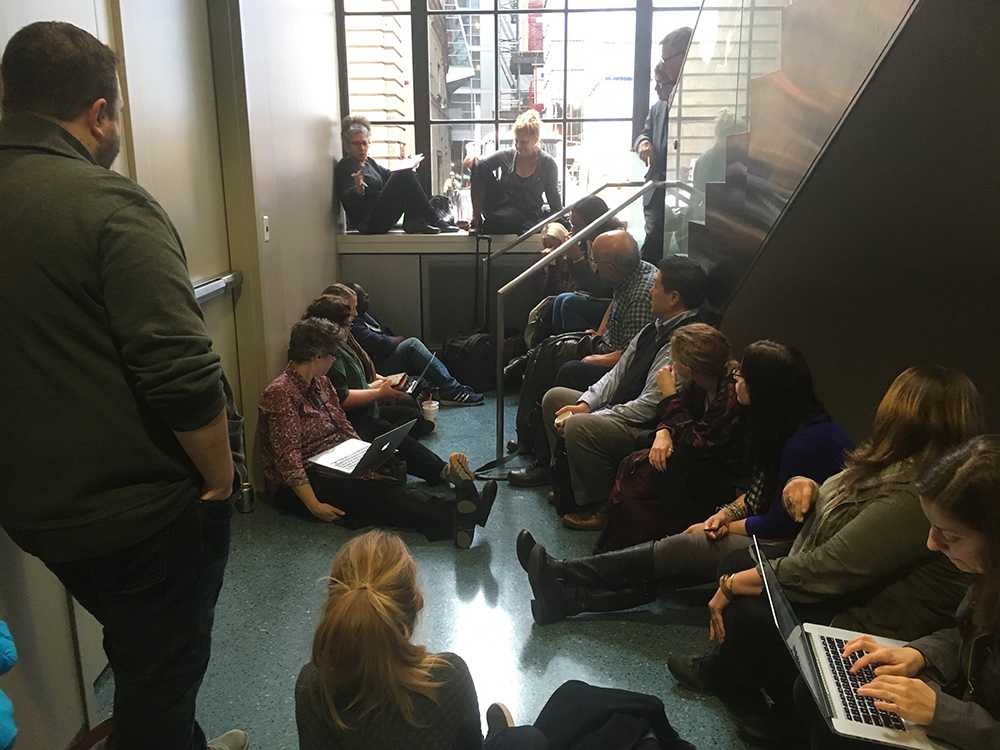 Over 100 faculty members, staff, and students gathered to discuss demands of the #ThisIsEmerson student-led protest, many expressing a lack of understanding of the Bias Response System.

Attendees split into groups and discussed response to a particular protest demand, such as tenure and the Deferred Action for Childhood Arrivals. Each table mentioned the Bias Response Program, an online system created by the Department of Diversity and Inclusion for staff, faculty, and students to report incidents of prejudice.

“We can’t act on it if we don’t know what ‘it’ is,” Intercultural Studies professor Cathryn Edelstein said about bias incident reporting.

The online petition, drafted by organization Protesting Oppression with Educational Reform, gained more than 2,000 signatures on Change.org since its conception two weeks ago.

“I’ve had students come to me about various professors in different departments, who have then gone to personally report it,” Edelstein said. “Some of the complaints have been pretty severe, but nothing happens after that. The professor is never notified. The chair is never notified. What bothers me is this system is not working. This system needs to be replaced.”

The Office of Diversity and Inclusion created the Bias Response Program in the summer of 2016 after students demanded cultural sensitivity training for professors in 2015. Vice President of Diversity and Inclusion Sylvia Spears said the Bias Response Program was formed because protesters said they did not know where to go with incidents of bias they encountered on campus.

Communication disorders and sciences professor Ruth Grossman said the end of the year bias report summary released by the office does accurately portray how or if the system is even functioning.

“The report that comes out at the end of the year is singularly uninformative,” she said. “It tells you [the] aggregate number of reports filed, but doesn’t tell you how many were followed up on or what even happened to them.”

“It sounds to me like students feel unsupported by staff, faculty and administration as a whole,” said Elma Lewis Center Program Coordinator Ashley Tarbet-DeStefano, “As people that value every part of this community, we need to figure out how to put concrete solutions in place so on March 5 when DACA expires there is not chaos that ensues, but that students can still attend class and receive financial aid.”

“Nobody needed to hear any more speeches,” Banks said. “A lot of people have been talking, but we need to work to find solutions now.”

The Ad-Hoc Committee formed in 2015 as a response from the Faculty Assembly to the student protests, Kamada said.

“Our goal here today is not to resolve everything very quickly, but to articulate a series of action items for the long term,” he said.

A designated note taker in every group recorded the conversations on a shared Google Document and shared them with the ad-hoc committee chairs.

The event started off with an introduction by President M. Lee Pelton, where he spoke about the progress the faculty have made over the last few years toward culturally sensitivity. He said almost all of the college full-time faculty have attended cultural competency training workshops.

He said he hopes the steps taken after this meeting make future actions taken by the administration more transparent to everybody involved.