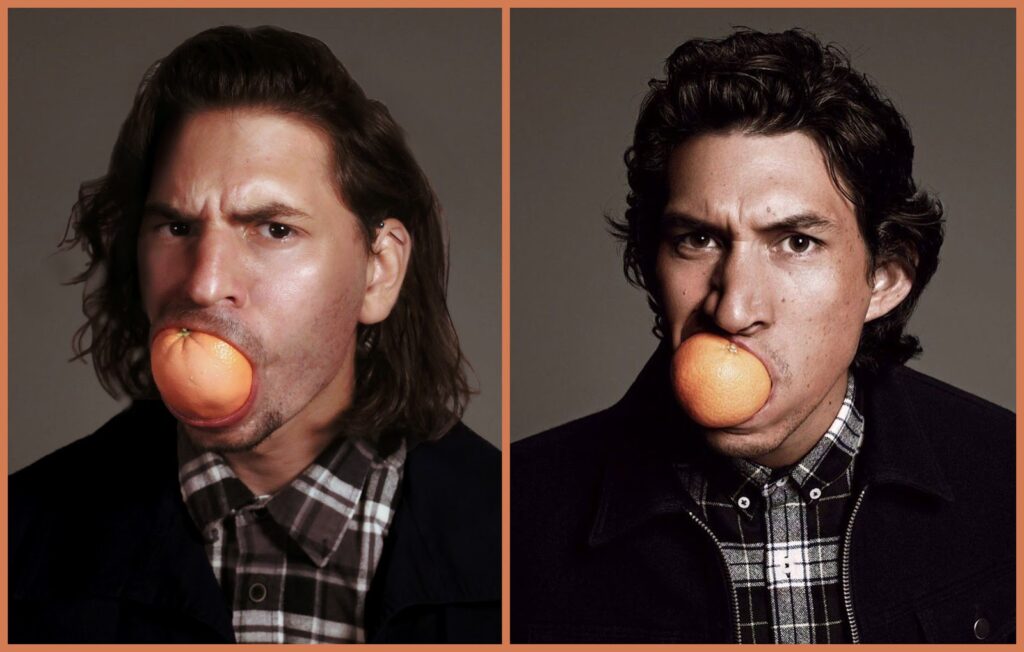 Schifano (left) said he had no idea how Driver (right) managed to fit the entire orange in his mouth. He had to cut his in half to make it fit. Photo courtesy of Ben Schifano.

While Ben Schifano vacationed in Disneyland last year, he agreed to strike a pose as Star Wars’ Kylo Ren after a mother asked him to take a picture with her child. “You look just like Adam Driver!” she told him.

This was not the first time someone called Schifano a dead-ringer for the Star Wars actor—he’d heard comments like these ever since the 2012 premiere of HBO television show “Girls,” where Driver played the amusing Adam Sackler.

“I thought, what’s a weird request I could have and what’s the lowest thing I could ask for?” Schifano said in a phone interview from Phoenix, Arizona.

During his final semester at Emerson, Schifano took classes at Emerson’s Los Angeles campus, where he held an internship at Dark Horse Entertainment. Schifano works as a server in Phoenix while he saves money to make the move back to Los Angeles.

Schifano said if Driver saw his account and agreed to buy him a sandwich, he would want Driver to order Schifano a sandwich that he himself would eat.

“I guess my ideal scenario would be me and him in a sandwich shop eating and chatting a bit,” Schifano said. “I would even be fine if he Venmo’d me for it.”

Inspired by other online celebrity impersonators, Schifano utilized the similarities between him and Driver to create the account.

“One day I was watching a Buzzfeed video and there was this woman who kind of looked like Emma Watson, who had made a full career out of her ability to look like someone else,” he said.

Schifano noted one flaw in his quest to attract Driver to the page: not only does Driver not have an Instagram account, but he does not use any social media platforms.

“The odds of him seeing this are very low,” Schifano said. “I also just genuinely find it funny, doing these posts knowing that he’ll never see them. He’s said in interviews that social media scares him.”

In July, entertainment website The A.V. Club published an article featuring Schifano and his photo recreations. Schifano said the article helped him gain over 250 new followers while also drawing in a flood of hate comments.

One of Schifano’s favorite comments included someone calling him a “Kylo Rental.” He said the criticism doesn’t bother him.

“I just laugh it off. It’s the very basic thing of people on the internet who are angry someone else is trying to do something publicly,” Schifano said. “Everyone does something to get attention to some extent.”

Former Emerson student and visual media arts major Abigail Baldwin knew about Schifano’s account before she actually met him in person at school.

“I met him through my roommate at the time,” Baldwin said. “I’ve always thought his account was really fun. I don’t think he really looks like Adam, but that’s the fun of it. I love it.”

Despite others’ observations of him, Schifano echoed Baldwin in saying he doesn’t see himself as the spitting image of Driver.

“I’ve stared at his face and my face for hours,” Schifano said. “He’s huge and muscular and I am a scrawny, lanky, tall man. There are jawline differences, eye color differences. Because of having to look so acutely at those I know how much I don’t look like him.”

Schifano said editing the photos has improved his photoshop skills. Schifano’s friends, who are skilled in photography and art, have assisted him in creating the photos.

“I shoot at my friends’ homes,” Schifano said. “We just move everything across the floor for like an hour, set up a white background and use lights or whatever we have to take these photos.”

He said the photos are a way for him to continue the type of art that he worked on at school, but without the restrictive structure of classes and assignments.

Schifano, who graduated with a visual and media arts degree, credits Emerson professor Gabrielle Follett with helping him develop his passion for avant-garde art and giving him the confidence to pursue his interest in film.

“She taught me how to understand and think about experimental film,” Schifano said. “She really opened my eyes about how half of watching something is how you react to it. It’s fine to watch an experimental film and not really get it. The most important thing is what you get out of it.”

Follett said she still keeps in contact with Schifano.

“He makes work that’s stylistically sophisticated, emotionally intelligent, and, often, hilariously funny,” she said in an interview. “I’m always excited to see what he’s working on next–the last few emails we exchanged included Ben learning to use a flame thrower and us musing over how it could be used to make art.”

Schifano said in the future he plans on recreating one of Driver’s scenes from the movie “Inside Llewyn Davis,” where Driver plays a country singer.

“I view what I’m doing as performance art,” Schifano said. “That’s what the [Driver] photos mean to me. It’s an easy enough way to feel like I’m still being creative.”