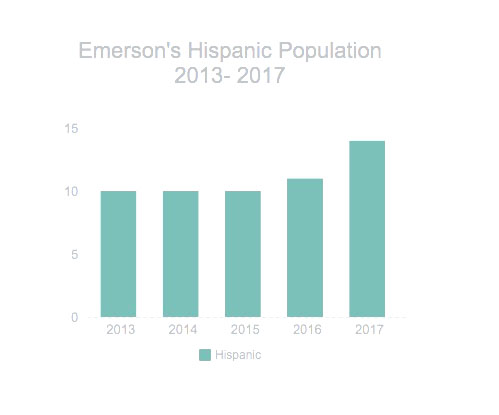 According to documents provided by the college, Emerson’s Hispanic population increased 24 percent, or 25 students, from last year.

Ruthanne Madsen, vice president for enrollment management, said that the shift was intentional.

“We really are trying to increase the number of Hispanic students we have here,” Madsen said. “It really is something we see as important.”

Before this year, 11 percent of undergraduates were Hispanic; the rate is now up to 14 percent of the new class. According to Madsen, the college employed a Spanish-seeking recruiter and a Spanish-speaking financial aid counselor as part of its efforts to increase Hispanic enrollment.

While the amount of new Hispanic students increased, only three percent of the incoming students were black or African American. Madsen said this was in line with previous years, but it was not something the school was satisfied with.

Madsen said the college was pursuing programs meant to attract students of color. She cited an event hosted by the college last year that invited prospective students to visit the college and stay with students overnight as one such program. According to data provided by Madsen, 51.5 percent of students who attended the overnight enrolled in the college.

She also said the college hoped to partner with student organizations to build a community that would better attract students from more diverse backgrounds.

Junior visual and media arts major and president of Emerson’s Black Organization with Natural Interests Aliyah Browne hosted a student during one of the overnight events, but said EBONI was not involved with the program.

“I think the biggest problem with our demographics at Emerson College and our lack of diversity is a financial problem,” Browne said. “A lot of students of color have a hard time paying for this school, and Emerson is not giving them the resources to come to this school.”

Madsen said that the college was working to increase the amount of financial aid available to students by working on appeals to donors to create more scholarships to encourage student diversity.

At the moment, however, Madsen said the college’s resources are limited.

“We don’t have the ability to fully fund a student to any great extent,” Madsen said. “When we recruit a student, we have to make sure that we’re being very upfront about what the costs are … We don’t want to bring in a student and set them up for failure.”

According to the same document, 10,360 non-transfer first-time students applied for the 2017 fall semester, a 13 percent increase from last year. Only 46 percent were accepted this year, as compared to 48 percent in 2016 and 49 percent the year before.