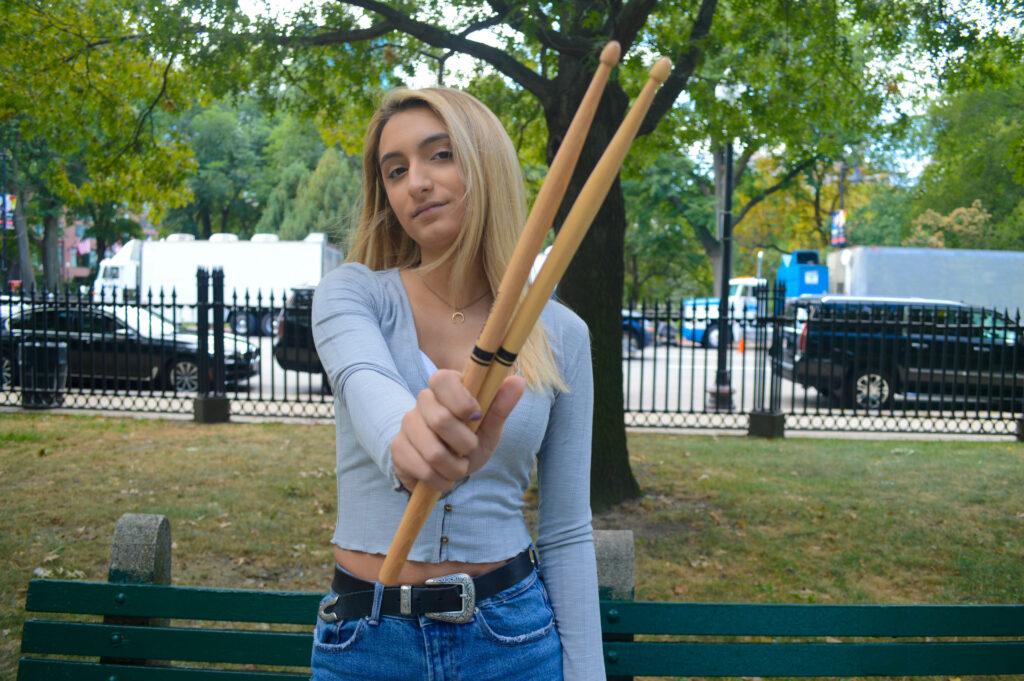 When junior Alessandra Guarneri attended a Camila Cabello concert in 2016 at the Orpheum Theatre, two fans recognized her from the Fifth Harmony covers Guarneri used to post on YouTube.

“It was wild,” Guarneri said. “I had never had that happen to me.”

Her friend, junior Samantha Wiener, attended the concert with Guarneri and recalled how stunned she was.

“I was like, ‘Did that just happen?’,” Wiener said. “And, after they walked away, it was no big deal. A couple different times we’ve been together when she’s been recognized, and I’m always shocked, and she just stays super humble.”

Guarneri started her Youtube channel, AlwaysAlessandra, playing song covers on the drums in 2014. Five years later, she has one hundred videos and 13,800 subscribers.

Guarneri’s musical journey started in fourth grade when she joined her school band and volunteered to play the snare drum. She played this particular drum with the band until fifth grade and in her high school’s drumline for one year.

“I loved the fact that you could hold a beat and you could hear a beat so easily on the radio,” she said. “I was enthralled with the fact that beats were in every song even if it was an orchestra song—you can feel the song.”

Fourteen-year-old Guarneri decided to start her own YouTube channel after feeling inspired by drum cover accounts such as sincerelyilanaa on YouTube. The artist posted Fifth Harmony covers to her channel, and Guarneri was a big fan.

“I wanted to track my progress,” Guarneri said. “I wanted people to give me feedback, I wanted to communicate with other drummers and musicians in the YouTube world, and it just all came together after that.”

Guarneri says she is proud of her growing YouTube channel and the recognition she’s received from it. Justin Bieber’s former lead guitarist Dan Kanter, singer Jacob Whitesides, and Camila Cabello’s manager Roger Gold all watched and praised her covers.

Additionally, Glamour Magazine featured her in a video where Hailee Steinfeld reacted to fans covering her songs. Guarneri said that people still recognize her from that video.

Wiener discovered Guarneri’s channel when they met as freshmen.

“One of the most notable features of her success for me is the fact that we’re so young, and not everybody goes to college and is actively working in the field they want to work in,” Wiener said.

When Guarneri records videos for her channel in the basement studio of her home in New Jersey, she always begins with a few warm-up songs before moving into the song she plans to post.

“A basic pop track is going to sound the same when it comes to drums from start to finish most likely,” Guarneri said. “If you get a track that’s more difficult, where they broke it up and the production is more advanced, it’s going to take longer to really realize the bridge has a different beat or it’s cut into a different time signature.”

After she records her final take, Guarneri edits the video, matching up the sound captured from the overhead microphone with the actual footage.

“[It could] be me messing around with milliseconds for 45 minutes, or I get it right the first time,” Guarneri said. “The editing is different every time.”

Guarneri said that, while this is her typical process, from the start of filming to the end of editing, creating a video can take anywhere from 10 minutes to an hour and a half.

Guarneri said her dedication to her channel paid off when her cover of Camila Cabello’s “Havana” reached 97,000 views. She said this cover was her hardest to nail down— she uploaded her cover the same day “Havana” was released, learning and editing it all in a matter of hours.

“The response was great and I just remember it all being worth it as soon as all the views and comments started pouring in,” she said.

Guarneri said her work goes beyond simply making the videos. She watches live performances of drummers to pick up differences in drumming styles between recordings and live tracks. Guarneri also said she goes to a lot of concerts, allowing her to observe various performance styles and listen to different types of music.

Junior Marquelle Bell, a friend of Guarneri, noticed how carefully Guarneri refines her performances, which allows her to enjoy playing more.

“Something that stands out when I watch her play in her videos is the pure enjoyment I can see on her face while playing,” Bell said. “Like you can genuinely tell she’s into what she plays and she creates her own authentic rhythm, and I can only respect her for it.”

Despite her drumming expertise, Guarneri said some male viewers act surprised by her skill and make remarks such as “I didn’t know women could drum!” Despite the commenters believing the comments are flattering, Guarneri said she finds them offensive.

Guarneri said these remarks motivate her to continue to post on her channel and break stereotypes around what drummers should look like.

She said she ultimately hopes to shift the conversation around drumming and deconstruct the idea of gendered activities.

“I definitely want to convey that message that people can do anything they want,” Guarneri said. “It’s not even just girls playing drums, a guy wants to be an ice skater or a girl wants to skateboard or whatever the case is. There shouldn’t be gendered activities and I don’t like reading comments that say, ‘Wow, girls can drum!’”