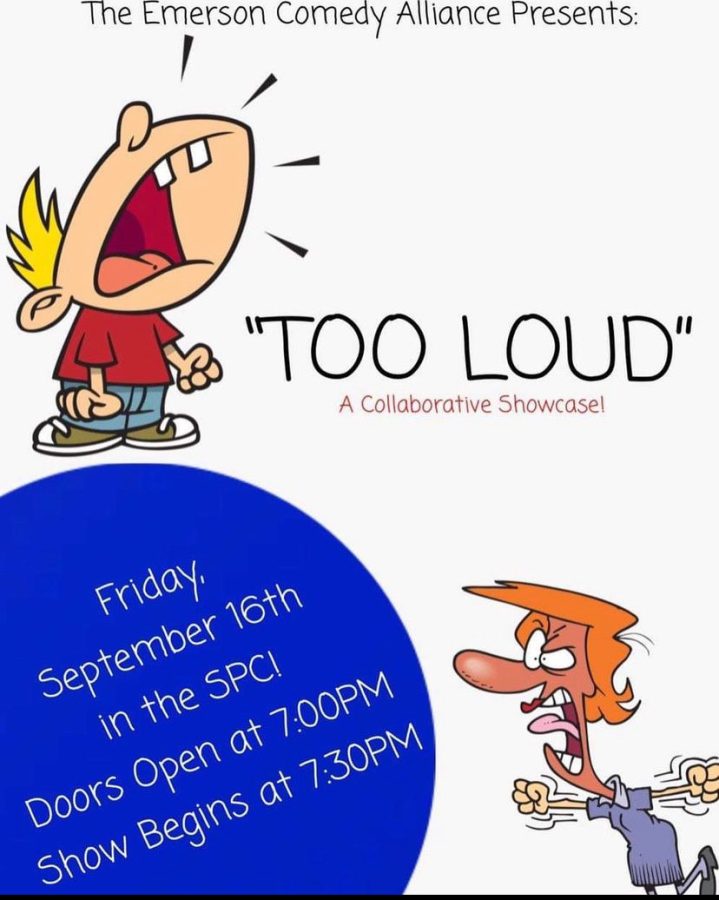 "Too Loud" is a collaborative showcase of comedy troupes on campus.

The Emerson Comedy Alliance All-Troupe comedy showcase is set to return on Sept. 16 with a slew of performers promoting their respective comedy troupes.

A total of 12 organizations will be participating in the event, including improv teams such as This is Pathetic, Stroopwafel, and Swomo.

Sketch comedy troupes such as The Girlie Project, Goose Troupe, and Chocolate Cake City will also be taking part, as well as a mix of stand-up comedy organizations such as Stand-Up in the Park and Inside Joke.

Troupes will use their allotted time to introduce their comedy and performance styles, giving extra attention this year to promoting socialization amongst comedians.

“We’ve restructured the format of the All-Troupe show in a way where we as the comedy troupes aren’t performing at these people, but rather we’re performing for these people,” said Breanna Nesbith, Stand-Up In the Park treasurer and Chocolate Cake City writing liaison. “[We are] fostering a comedic arts community where they create a genuine interest [comedians] want to learn more about and enjoy.”

In the past, the All-Troupe show’s purpose has been to promote comedy troupe auditions for sketch and improv comedy troupes with limited spots. Though much of the early comedy season is centered around comedic auditions—auditions which will take place following the all-troupe show—this season will emphasize cooperation amongst comedians rather than exclusion.

“The biggest concern is that performing at these people for so long has not at all reflected what the Emerson Comedic Arts Community tries to do, which is make comedy accessible for anyone regardless of experience,” Nesbith said.

Creating a community within the audition process also promotes a social aspect of student comedy. At the upcoming showcase, it’s expected that there will be a solid mix of both performance and social interaction, feeding into the mission of The Emerson Comedy Alliance.

“By hosting a mixer followed by a show, we are promoting what we do as a troupe more than saying ‘hey, look at us,’” said Derbyn president Emily Hammond. “We want to show off what makes each troupe unique and what would entice you to join.”

In the upcoming school year, troupes are emphasizing the importance of incorporating community, friendship, and fun into their usual series of events.

“The troupes are committing to hosting a series of workshops and get-togethers,” Hammond said. “I know [Emerson Comedy Workshop] just held a puppet workshop. My troupe, Derbyn, held a community show where people were encouraged to help us put a variety show together.”

Nesbith noted that, in past years, she’d seen a sort of hierarchy where troupes receive more attention than individual comedians.

“We want to break down the [idea] that because you’re in a troupe, your comedy or style as a comedian is superior to anybody who isn’t in a troupe or has the access to a troupe,” Nesbith said.

In an effort to combat any sort of hierarchy this year, the alliance aims to be more inclusive for prospective performers and comedians.

“Troupes are really breaking down the walls,” Nesbith said. “We’re doing community shows where people who aren’t even in a troupe can come out and pitch a sketch. We’re doing workshops open to the entire community. We’re doing rolling auditions now.”

Following the All-Troupe show on the 16th, auditions will pick up across the Emerson comedy scene. Auditions will be held amongst improv and sketch troupes and will take on many forms. Some troupes, such as Derbyn, will hold creatively ambiguous auditions where performers can choose their own audition processes. Improv troupes such as SWOMO, Stroopwafel, and This is Pathetic will run a joint improv audition on Sept. 25. Multiple troupes, such as Flawed Comedy, will hold auditions on a rolling basis throughout the semester.

“I am looking forward to seeing how improv auditions go, as our three improv troupes are doing a joint audition,” Hammond said. “There will also be a comedians of color showcase that Stand Up in the Park is putting on in November.”

The showcase is set to kick off the upcoming season with a warm welcome to all audience members, comedians, and potential future troupe members.