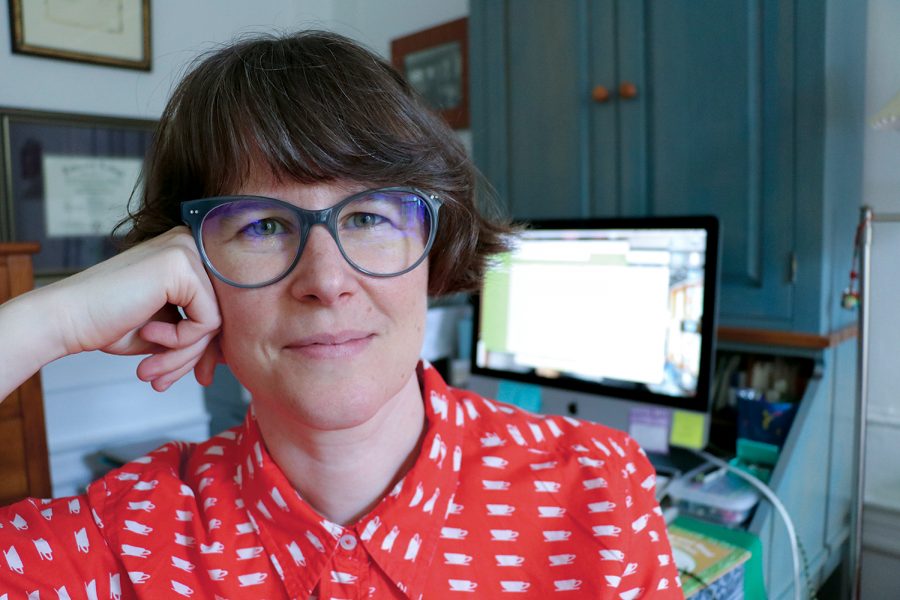 Clements was present at a screening of “All We’ve Got” on Feb. 19 2020 at the Coolidge Corner Theater.

After coming out in her twenties, Alexis Clements ‘01 sought a community space for queer women but soon learned that the majority of them were closing across the country, inspiring her to research the spaces and showcase the narratives of queer women within these communities in a documentary.

The result of Clements’ research, a documentary titled “All We’ve Got,” showcases the importance of spaces for queer women in America. “All We’ve Got” utilizes various narratives from owners and participants of these spaces—locations where queer women can organize politically, express art, and build community—to highlight their importance to the women who are a part of them. GlobeDocs Film Festival screened the documentary with Clements present at the Coolidge Corner Theater in Brookline on Feb. 19 for people to view and discuss the film.

“It’s been super exciting to be at screenings like the one in Boston where people are able to speak across generations and across communities and really like have a moment to think about what it means to be in the queer community today,” Clements said in a phone interview from Brooklyn, New York.

The film focuses on five spaces and their own ways of creating community. Alibis in Oklahoma City, Oklahoma is a lesbian bar. The Lesbian Herstory Archives in Brooklyn, New York collects materials by lesbians to document their history. Esperanza Peace and Justice Center in San Antonio, Texas is a space for advocacy work as well as cultural and educational programming predominantly centered around inequalities faced by minorities. Wow Cafe Theater is a feminist theater space in New York, New York. The documentary closes with a Facebook group called Trans Ladies Picnic, where transgender women can meet up in public spaces.

“It is not simply to find people to date,” Clements said. “They are places to gather strength and strategy.”

Clements originally intended for the documentary to be a play entirely cast by queer women. After a script reading at the Lesbian Herstory Archives in Brooklyn, New York, Clements felt moved to do more community readings at queer women’s spaces around the country. Through researching these spaces, Clements became more invested in how areas for queer women are closing down.

“They often end with a little note, ‘If you just bought another beer this place would still be here.’ And that is so bullshit,” Clements said. “Sure if you still could afford to live in a neighborhood next door to that bar and then you could also afford to buy that second beer, but the reality is that most of the people who occupy the bars that have closed have also been pushed out. It is such a kind of victim-blaming, and like a crappy game that gets played against queer women.”

Clements wrestled with the idea of community throughout the process of the documentary. She said the term is often used in too broad of a form to describe groups of people.

“[Community] is something more than just being in the room together,” Clements said. “What it provides is that you’re sitting in the room, you’re working with people who you might share something in common with, but you care enough about the shared purpose to work through difficulty.”

This topic was a shock to some of the audience members when discussing the various queer women’s spaces that have closed in Boston after the screening.

“You don’t think about it, but then you are like ‘Oh…yeah,’” Caitlin Hamill, who attended the screening, said. “This is a really important narrative that doesn’t get the same recognition.”

The process for filming and editing the documentary took five and a half years, which Clements said is quick compared to most directors’ first documentaries. Clements traveled around the country, filming different spaces in New York, Florida, Louisiana, and California, among other places.

After the editing process, Clements decided to send the individual film sections that showcased the five spaces to their respective organizers.

“It felt important for the people speaking to not feel like we were taking anything away from them,” Clements said.

While Clements argued that these spaces are still important to queer women today, GlobeDocs audience member Denise Lagault noted that they were more important in the past.

“These spaces aren’t as needed as they were because [queer people] can hold hands [in public],” Lagault said, “You don’t have to find these spaces. I lived two separate lives.”

Clements urged the crowd at the end of the screening to continue the conversation about these spaces closing down.

“I do think if we are going to have space together and we’re going to get anywhere together, we’ve got to dig into this,” Clements said.