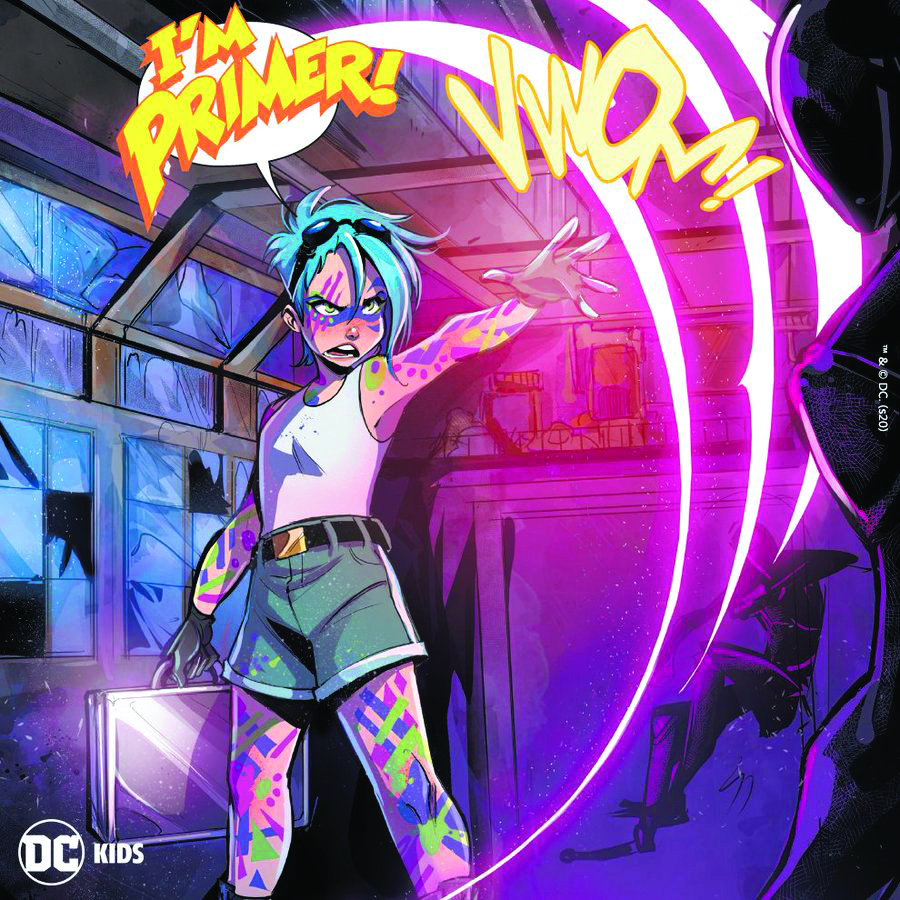 Thomas Krajewski ‘99 brought to life a brand-new superhero within one of most well-established comic book universes in the world, DC Comics. The international comics brand published Primer in 2020, which Krajewski created with the help of his writing partner, Jennifer Muro, and illustrator Gretel Lusky.

Primer follows Ashley Rayburn, a thirteen-year-old girl who has been in the foster care system since her biological father was imprisoned when she was younger. Ashley’s story begins with her moving in with a new foster family, after which her foster mother, a brilliant scientist, brings home a set of superpowered body paints in hopes of keeping the product out of the military’s hands. Upon discovering them, Ashley gains sole access to the paints’ abilities, each color giving her a different superpower and transforming her into the superhero Primer.

Krajewski graduated more than two decades ago, back when, as he recalls, only one or two screenwriting classes were offered. He mostly focused on writing for animation after his time at Emerson, where he earned a BFA in film.

In the past, he has mostly focused on doing freelance work, including writing for Max Steel, Scooby-Doo and Guess Who?, and the Emmy-nominated children’s show The Fairly OddParents. Some of his current projects include writing for Apple TV+ as well as working as a story editor and producer for the animated television series Boy Girl Dog Cat Mouse Cheese.

Krajewski spoke to The Beacon about his time at Emerson and the creation of his recently published graphic novel.

This interview was edited for clarity and length.

Q. What inspired you to want to create this story and character?

A. I was definitely inspired by the Wonder Woman movie because I’ve grown up with all my male role model characters, and it’s been awesome for me. Then you finally have the Wonder Woman movie come out, and it’s a character that people have been meeting and watching for years, a character that means a lot to so many people. And so I’m blown away by the fact that we finally have that character represented. And personally, I love strong women. My mom’s super strong. My two older sisters used to babysit me, drive me everywhere. They were just awesomely strong people to look up to. I’ve always been mainly writing for male characters, and I just wanted to help create another female character for people to look up to and get inspired by.

Q. How did you get DC Comics to pick up this new character?

A. So it was about 2 1/2 years ago when [Muro] and I were sitting around, just talking about how to create a new superhero. And we just came up with the idea of superpowered body paints. We’re like, “Oh, that sounds really cool.” And [Muro] makes a lot of contacts, she had this contact, a good friend of hers at DC Comics who just happened to be in the publishing department. And one day, [her contact] said, “Hey, you know, we’re looking for new superheroes for this line of graphic novels.” And [Muro] was like, “Really? Because [Krajewski] and I just came up with one a month ago.” And so [Muro] just soft-pitched the idea at a party. We were in the right place at the right time with the right property. That’s how we got it to DC because [Muro] knew somebody, and they just happened to be looking for new superheroes.

Q. So Primer has been out for three months now. How has it been received? How’s it doing commercially?

A. We just announced that we’re going into a second printing, which is very exciting. So the first run of however many thousands they made, I’m not quite sure. I guess DC saw that it was selling very well. So they told us we’re gonna do another printing. We’re very excited about that. And the reviews that have been coming in are just awesome. People are really responding to the fact that DC has a new female superhero, one that is so inspirational and colorful and fun. For me to read the reviews—and I look for reviews all the time—I can’t explain how touched I am when people talk about how much they love the book or how much their kids love the book. I’m humbled and honored by what people say.

Q. What does Primer’s future look like? Where do you want her story to go from here?

A. [Muro] and I have thought out the next four books. So we have our plan; we need DC to get on board with this plan, too. But we have the next four books thought out, and if you read the first book, you’ll see that we set up a sequel where her father discovers a certain thing about [Primer]. And so we want to explore more about Primer’s past and her family. We have plans to watch her grow, become more independent, and really learn what it means to be a hero. We have all these great obstacles we want to throw at her and new powers we want to give her, and [we want to] kind of wrap up everything within a full five-book series. There’s always the possibility of crossing Primer over with other DC existing superheroes. Right now, she just exists in kind of her own world, so that way we can just focus on her and not have, like, Batman or Wonder Woman come in.

Q. How would you describe your time at Emerson?

A. It was an awesome time. Unfortunately, I lived at home to save money, and I commuted to school. I grew up in Winchester, Massachusetts, about eight miles north of Boston. So unfortunately, I didn’t get the on-campus experience, and I didn’t get to meet as many people as I wanted to. But what I did love about Emerson is that there were so many projects to get involved with. I auditioned for a lot of student films and shows, and I was in a bunch of them and made some great friends that way. I started off going to UMass Amherst my first year and transferred to Emerson in my sophomore year. So when I got there, even though I lived at home, it was still just amazing to go to class and be able to create and actually get involved with making student films and TV shows. That’s probably the most important thing Emerson is that unlike my previous major [Exercise Science], here at film school, everybody wants to create. It gave me the opportunity to be a part of something.

Q. So what advice would you give current Emerson students who want to go into the entertainment industry?

A. The thing that I always learned too late was that it is good to make the connections and schmooze. That’s something that I’m not necessarily comfortable doing because I just don’t like it. But the people who I’ve seen succeed the most are the ones who really do make those connections and reach out on LinkedIn or Twitter. It really is about knowing as many people as you can. The best advice I got from Emerson was to do the Los Angeles program. Because if you want to work in entertainment, obviously it helps to be in the big cities, in New York or LA. Once you’re out, once you’re graduated, you’ll find that there are Emerson people everywhere. So everyone’s going to look out for each other. It is great that we have the Emerson Mafia to reach out to other Emerson people. A lot of Emerson people do want to help, and we feel very proud that we went to Emerson. So if you want to get into the entertainment business, reach out to people.