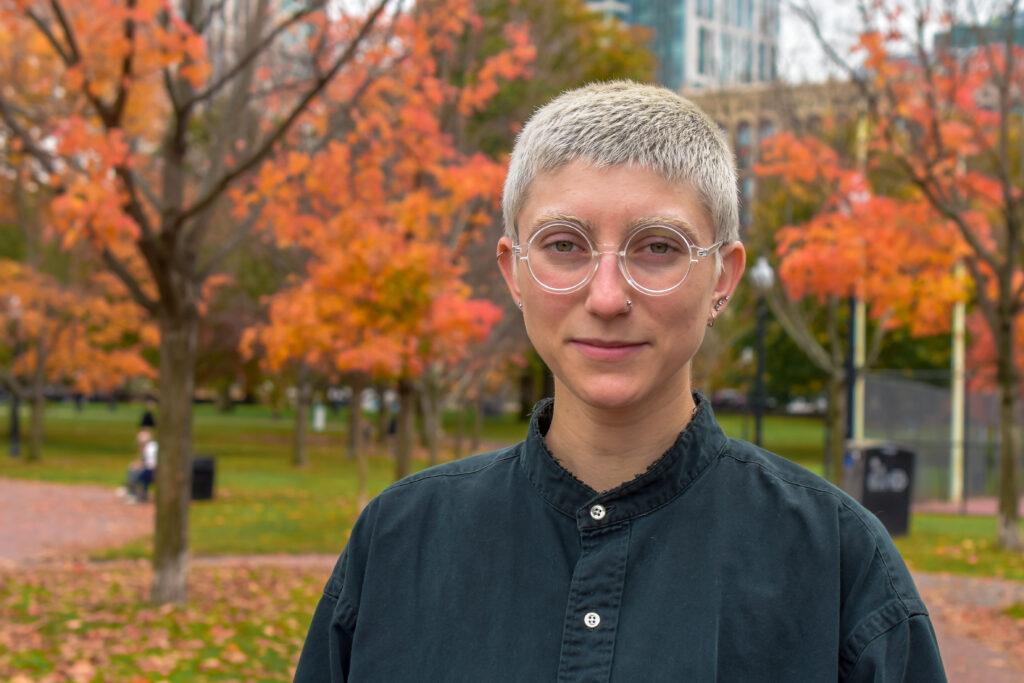 Georden West ’18 watched in disapproval as their college in southern Virginia forced transgender students to leave, stripping them of their ability to graduate. As a queer media maker, they refuse to acknowledge the name of the institution and promote its existence.

“I was making films about what it was like to be a queer person in southern Virginia,” West said in an interview. “Anytime you’re part of a marginalized community, it informs the way you experience the world, and it was nice to have art to help mediate that experience.”

West said their film and art aim to represent and uplift the queer community, as seen through their Student Academy Award-winning graduate thesis and experimental film “Patron Saint.” The black-and-white short film won gold in the Alternative/Experimental category at the Student Academy’s Oct. 17 event and uses fashion to portray deities in a contemporary queer light.

“I wondered what it was to apply a perfect ideal onto my community,” West said. “How could I elevate my community using these techniques of perfection? To me, there’s a godliness within that.”

West completed “Patron Saint” in December 2018 and premiered the film in July 2019 at Outfest, an LGBTQ+-oriented film festival in Los Angeles. Although the film is making its rounds in the festival circuit, it will not be released to the public until spring 2020.

West collaborated with fashion designer Jamall Osterholm to create the queer deities within the film. Osterholm, a Providence-based African-American designer, focuses on portraying topics of race and gender through his clothing. His fashion appeared in the last season of Project Runway and earned him a sponsorship with LifeWater. West reached out to him because of their mutual interest in using art as a form of expression for marginalized communities.

“It’s nice to see when design and fashion have something to say about the world,” West said. “Fashion is largely aspirational.”

“I thought that fashion and design would be an interesting way to mediate a queer experience, because I knew I wasn’t interested in making a narrative film,” West said.

After growing up in a Catholic household in Monument, Colorado, West wanted to incorporate religious undertones into much of their work. They created short experimental films with their six siblings throughout their childhood, but pursued a career in writing as they grew older. Before coming to Emerson for graduate school, West briefly attended American University as a graduate student where they considered a future as a lawyer before dropping out and setting their sights on film, fashion, and art.

The Student Academy Awards notified West of their gold medal award in August. At the award ceremony in Beverly Hills, California, West thanked their family and crew during their acceptance speech. They said the community of accomplished filmmakers at the event provided a special atmosphere.

“It was nice being around immensely talented people, people who are going to be making the cutting edge films of the next generation,” West said. “Being in a community with those people is nuts—it was really wonderful.”

West graduated with a master of fine arts degree in film and media art from Emerson in December 2018. They quickly transitioned to teaching, now working as a cinematography professor at Emerson and the Massachusetts College of Art and Design.

“My students are awesome,” West said. “I’m really hopeful that I can give a new perspective to what cinematography can be and what it can articulate.”

“They came in with such a high level of talent and dedication to the work that they did,” Clark said in a phone interview. “They had already committed to exploring fashion in film and fashion photography. They certainly used their time at Emerson to produce some high-level content.”

The crew of “Patron Saint” previously worked together on two other films. West said they enjoy the familial environment the team brings to the set.

“I’m nothing without my crew,” West said. “I feel very lucky to be surrounded by a group of people who are encouraging and believe in the project enough to bring their best to the set and contribute the best ideas they have. It’s nice to be in community while you grow—I feel like we’re growing up together.”

Crew member and key grip Josue Cardoza met West in 2017 and said they formed an instant bond. He said West’s character and leadership on set creates a positive environment during production.

This past July, West finished shooting their next film, which includes another Osterholm fashion line and will finish post-production in December. West said they plan to film their first narrative piece in the summer of 2020.

Although West won a Student Academy Award, they do not consider themselves a filmmaker. In March 2019, they showcased an installation art piece of over 7,000 red carnations, also called Patron Saint, at the Distillery Gallery in Boston. They plan to create and curate another show, titled Hagiography, at the same gallery in March 2020. They also aim to open another show at the Dorchester Art Project, called Queer Body in Ecstasy/Objects of Desire, in the same month. More information about West and their upcoming work can be found on their website.

Clark said West’s persona and skill will attract colleagues throughout their career as they explore a future in film and art.

“[West] is so talented that there are a number of options for them in their career moving forward,” Clark said. “To think that they would pursue some kind of typical career in the industry is not the case. People are going to want to work with them because of their talents and dedication to their work.”