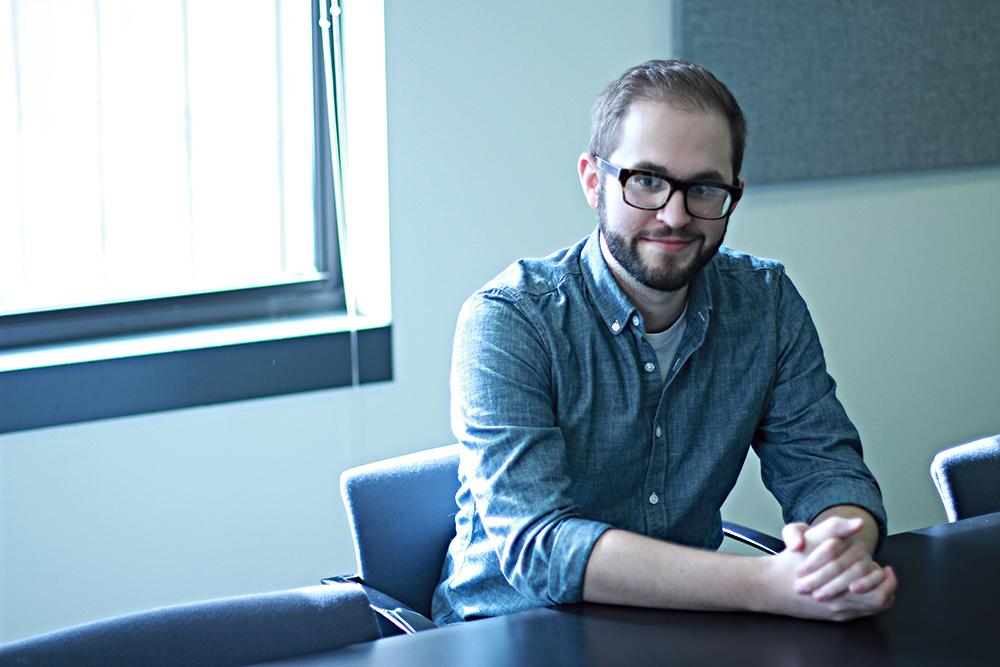 For Julian Higgins, an Emerson alumnus now teaching a class in the Los Angeles program, the path to becoming a director was deceivingly simple.

“The only way to become a filmmaker is by making films,” said Higgins, a 2008 BFA graduate. “I don’t want to talk about making movies. I want to make them.”

As a seventh grader, Higgins ran around his house, shooting movies with friends. Now 27, Higgins came to the Bright Family Screening Room to showcase two films that were the culmination of his work at both Emerson College and the American Film Institute.

No Wind, No Waves, the product of Higgins’ time at Emerson College, is a short film about a Chinese man coming to America to give his son a wrapped gift. Higgins’ choice to let natural sound, as opposed to a soundtrack, underscore each scene adds to the raw feeling of isolation the main character goes through.

“I’m interested in experiences of being an outsider,” said Higgins. “I’m really interested in other cultures and other ways of living in the world.”

Higgins’ father teaches East Asian history while his mother teaches French literature and film. According to Higgins, growing up in that environment made him very curious about other cultures.

Much of No Wind, No Waves was in Cantonese, and none of it was translated for the audience. This was a specific choice for Higgins, who said he wanted the story to stand on its own visually.

“You should be able to turn the sound off and still be able to follow the story,” said Higgins. “My job is to photograph the subtext of the scene. It’s the communication beneath the dialogue that matters.”

And it’s with this fish-out-of-water tale that Higgins got accepted to AFI, which houses a world-renowned graduate school for film students.

“I didn’t want to go to graduate school,” said Higgins of his choice to go right from one institution to another. “It’s more that I just wanted to go to AFI.”

Higgins said he was drawn to AFI because of its intensive two-year program, which he calls “all production, all the time.” During his tenure at AFI, Higgins made four films, including his year-long thesis, Thief.

The film tells the story of Mehdi, an Iraqi boy who unknowingly befriends a young Saddam Hussein, only to meet him again 40 years later. The film expertly crafts its story, as the audience slowly learns how a young Saddam betrays Mehdi. Forty years later, in 2003, Mehdi has the chance to take revenge. But will he choose a different method of justice?

“I love creating a world and a visual landscape,” said Higgins. “But I also want to create a human, compelling, and emotional experience.”

Thief received many awards, including the Gold Medal for Narrative at the 38th Student Academy Awards, one of the most prestigious student film contests in the country. Past award winners include the likes of Spike Lee and Robert Zemeckis. Higgins himself proved a worthy addition to list of previous winners with his 25-minute short film.

Higgins shows great restraint in both films, which is surprising for a young filmmaker. Like his Emerson thesis film, Thief is sparse on dialogue, instead focusing on telling its story visually. Every shot is again meticulously composed, somehow turning  a film shoot in the barren outskirts of Los Angeles into the dried countryside of Iraq for the finished product.

“It solidified the perception of me as someone worth meeting,” Higgins said of his AFI thesis.

For No Wind, No Waves, Higgins said he was working with a budget of $18,000, raised entirely by himself through the help of his family and peers. As he noted, this was before online fundraising website Kickstarter became a helpful tool for student filmmakers. The scope and production budget are immensely upped for Thief, which was paid for by AFI and cost $50,000.

Higgins said thesis films at the school are capped at $64,000 for a very specific reason.

“Putting limitations on budget forces creativity,” said Higgins, who places emphasis on story above all else. “You have to be ambitious and challenge yourself if you want to make something good.”

Currently producing a documentary film, Higgins laments how difficult it is to break into the industry as a director. But so far, he’s doing all he can to turn his seventh grade dream into a reality.

“I can’t wait for permission,” he said about directing films. “I need to pursue projects I’m passionate about.”

That eagerness led to a brief film shoot for a short entitled Here and Now, which was one of only five films chosen by director Ron Howard and film equipment company Canon for their film competition Project Imaginat10n Film Contest.

Unlike his other two films, this one features absolutely no dialogue. Higgins said  he hopes that all of his work can lead him on the path to getting more jobs and opportunities, such as his gig directing an episode on the final season of House.

“All of these shorts have to reflect me,” he said. “I have to solidify the perception of who I am.”