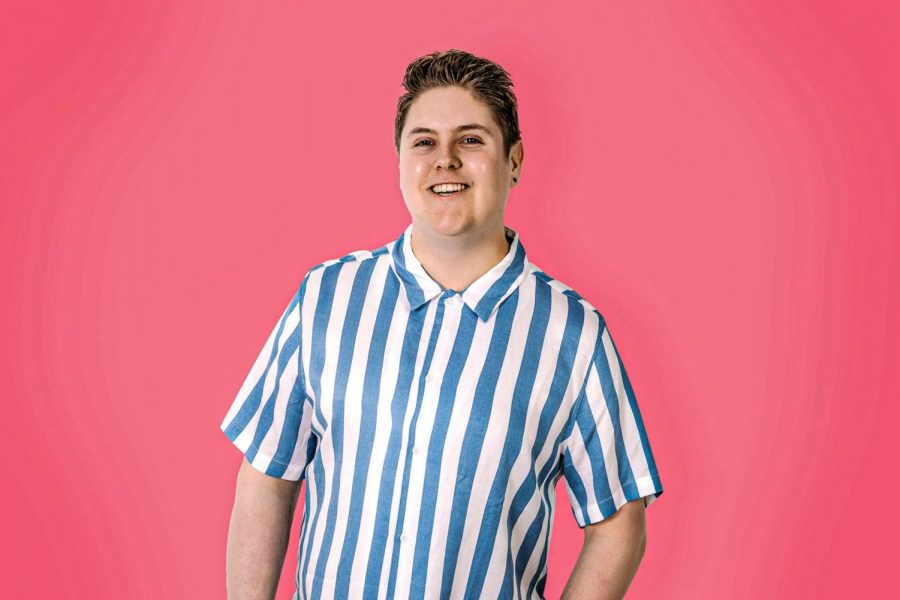 Pat Timmons ’17 spent his time at Emerson in basements surrounded by vibrant colors, independent artists, and crowds of onlookers.

Whether the shows attracted 10 people or 50, he watched musicians play their music with every ounce of energy they could give. Inspired by the artists he watched, Timmons decided to use his marketing communications degree to support them.

After finishing his masters of arts and music business degree at Berklee College of Music in September, Timmons launched Pop Off Agency to aid independent artists with branding, social media, and content creation after developing the company during his master’s capstone project.

“Their work ethic is for themselves, and it’s like their energy is just really coming from the passion they have behind their music and their work,” he said in a phone interview. “I think being able to take their vision and make it a reality with them is really exciting.”

Timmons began a masters of music industry leadership program at Northeastern University but transferred to Berklee after they created the arts and music business program. However, Timmons met all of Pop Off’s current team members at Northeastern.

Timmons said the team personally tailors the work they do to fit clients’ needs. When a client works with them, Pop Off asks what the client’s three main goals are—for example, more followers on social media or higher community engagement. According to Timmons, Pop Off then dives into the data of the client’s existing social media to understand their fan base. By knowing the demographics of their supporters, the agency helps the client appeal more to their supporters.

Silvers said Pop Off takes care of these services so artists can focus on creating music.

“If I can file those copyright registrations for them and get them on streaming platforms via distribution channels, and if [Timmons] can manage their social media, and if [Chen] can do their photography and graphic design, and if [Aciego Mendoza] can get them all their analytics, that’s just something they don’t have to worry about and they can focus on making great music,” Silvers said.

Silvers also said he also acts as the liaison between the company and their lawyer, though he plans to get a law degree and become the company’s lawyer in the future.

Pop Off’s website lists many of its clients, including work with Entertainment for Change and Boston-based pop-punk band Start the Week Over. Hard rock and blues band Sons Lunaris is one of the companies biggest clients, and Timmons said they have worked with the band for a long time.

Sons Lunaris lead vocalist Alex Simpson said he knows that, as an independent artist, running the business side of a band can be overwhelming without assistance.

“What goes into making a band run is really a lot for a singular person to handle,” Simpson said in a phone interview. “I mean, that’s why major label bands have a tour manager, a personal manager, personal assistants, and they’ve got booking agents and lawyers and everything. They have a whole team because doing all of that by yourself is a lot.”

Timmons said Sons Lunaris began to work with him alone in January 2018 before he officially launched the agency. When they began working together, Sons Lunaris had 800 followers on Facebook. At the time of publication, they have over 2,000.

“Having the setup with them where they can help us continue that kind of thing on the social media websites and pages definitely makes the success of the band that much more, because our fans know what we’re doing and they know when our shows are and then they interact—they come out to the shows,” Simpson said. “Social media actually boosted it because we’re working the algorithm correctly in ways that I myself wouldn’t know.”

The agency facilitated the social media campaign “Sonsday,” where the band posts a song cover on Facebook and Instagram every Sunday. Pop Off can then analyze which songs perform best, showing which musical styles fans prefer. Timmons said the covers attract high online engagement and are used to inform live shows and recording albums.

Timmons said Pop Off is not a full-time job for any of the members. The profits are not enough to be a sole source of income, as Pop Off aims to be affordable to independent artists.

“It’s something that we just kind of want to do to benefit the Boston music community, as well as any indie community in general,” he said. “And it’s just kind of like a passion project.”

Timmons stressed that independent artists need three main things to be successful: music available on streaming services, a great live show, and a strong presence on social media and within their city.

Silvers believes the independent music scene in Boston is enormous and resilient, which is one of the reasons Timmons created Pop Off.

“What is common and great about Boston is the kind of underground indie music scene, and that’s kind of the population we’re trying to serve,” Silvers said. “And I think that’s specific to Boston out of the areas that we do serve, which are LA, New York, Boston.”

When designing the concept of Pop Off at Berklee, Timmons said that he was told he should turn it into a business. After Timmons decided to do so, his classmates told him that he was “filling a gap” in Boston.

“Boston has a special place in all of our hearts—you know personally my passion is because I was born and raised in the Boston area,” Timmons said. “And I really would love to see this city become a music city.”