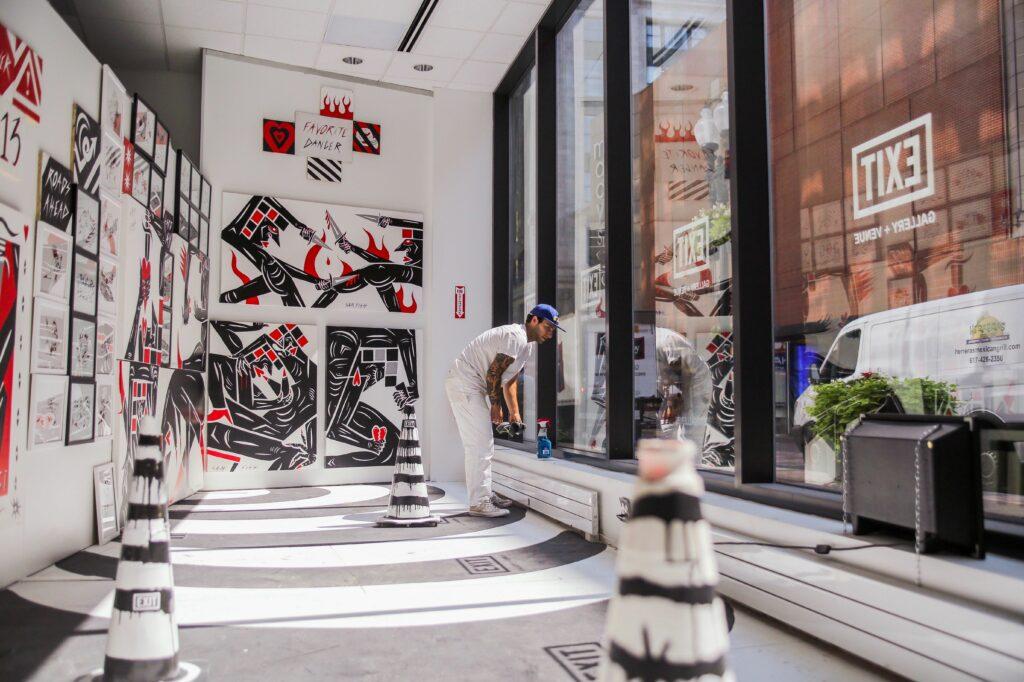 Sam Fish ‘15 felt frustrated with the lack of space for young artists in Boston. He opened EXIT, a pop-up gallery near Emerson to solve that problem. Photo courtesy of Andre Beriau.

Black, white, and red paint popped through a storefront window while two men stood in the doorway, welcoming in anyone enamored by the art inside. Behind the doors, low lighting mixed with lively conversation as attendees and artists alike celebrated the images surrounding them.

The gallery in Downtown Crossing served as a noticeable location for young contemporary artists. Exhibitions at EXIT comprised artwork that Fish has both contributed to and curated. While EXIT has yet to establish a permanent location, the space at 467 Washington St. marked the third space the gallery inhabited, ranging from Aug. 1 to Sept. 30.

Fish created the first pop-up EXIT gallery in November 2018 at Bow Market in Somerville, and his second below Riverside Tattoo in Cambridge. When the gallery occupied the space at Bow Market, an exit sign stood in front. With no money to purchase a new sign, Fish kept the exit sign and the name stuck.

“[EXIT] grew from my frustrations as an artist in Boston,” Fish said. “Trying to figure out how to be successful here and realizing it was futile.”

While Fish stayed cooped up in his room after a skateboarding accident two years ago, at age 25, the then-marketing director became engrossed in art. Rather than letting his aggravation win, Fish began the EXIT galleries to create what he felt the area lacked.

“The problem is a lack of space, it’s the lack of middle ground,” Fish said. “You know there’s big institutions and there’s an underground art scene, but there’s no emerging art scene working to elevate young talent.”

Through EXIT, Fish creates an industry for artists under or around the age of 30. Rather than continuing to have artists flee to cities like New York or Los Angeles for a more established young art scene, Fish plans to forge one in Boston.

Chris Sageman, a contributor to EXIT, is thrilled to be a part of what Fish is doing.

“I think the biggest thing is just younger artists who—especially at least [in] my experience going to art school—I only have my undergrad and a lot of galleries won’t even look at your submissions if you don’t have your masters,” Sageman said. “To have a space for people who might not be able to afford to go to grad school or whatever it is, who still make good work, can show their work. That’s amazing.”

Fish studied marketing communications at Emerson and minored in entrepreneurial studies. Leslie Medalie, an E3 tutor within the minor, said the program consists of a year-long immersive course where students create and develop their own business.

While Fish did not design EXIT in the course, he said his time at the college taught him to be an entrepreneur.

“The whole mission is to create a space for young contemporary artists to communicate, collaborate, and share,” Fish said.

Before EXIT, Fish knew of other creative individuals in the area, yet found it difficult to connect with them. Local artist Katie Lane felt the embodiment of Fish’s mission.

“EXIT in general is a freaking amazing space—I’ve really enjoyed all my interactions with people,” Katie Lane said. “The community that it builds I think is really incredible.”

Fish said he gives artists space to create or display works of their choosing, and themes emerge at the completion of the collection—creating an unconventional gallery style with no predefined concepts for shows. Fish said the theme of DTX is risk, as all the featured artists pushed the boundaries of contemporary art in Boston.

“I’d like to be able to do it in multiple spaces at once, if I can,” Fish said. “I have a vision for a network of a map of these art portals. I’m calling them different EXITs.”

The portals would give Boston various spaces that exhibit different shows that the public can trust to give them riveting pieces, Fish said.

“I think we’re gonna show the city what’s up,” Fish laughed. “I mean, we already are.”

Fish said the dedication he feels to the Boston art scene will push him to continue building and supporting the genre of work EXIT showcases, despite having no established location for the gallery.

“I feel like because I grew up here, I have a community and I have connections where I’m uniquely positioned to be able to do this, where I feel like I have to,” Fish said. “It just seems like a fight worth fighting.”