The Berkeley Beacon • May 9, 2020 • https://berkeleybeacon.com/alum-publishes-debut-novel-darling-rose-gold/ 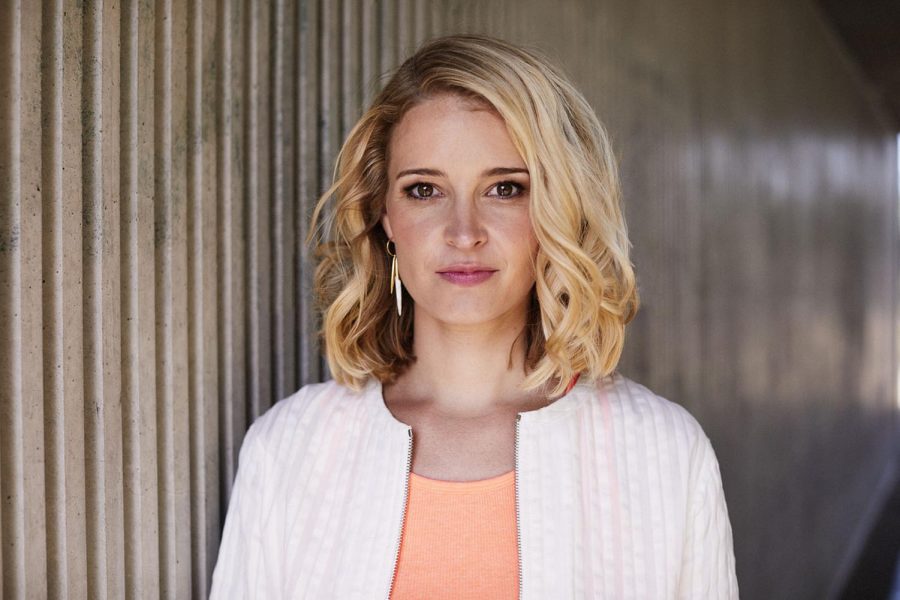 After meeting with her thesis reader about her creative writing thesis in 2017, Stephanie Wrobel ‘19 almost scrapped the entire first draft.

“I ended up throwing away the entire thing, except for the two main characters,” Wrobel said in a phone interview from London. “I had written that first draft really quickly, like in a month, so I just told myself, you know what, I can do it again. And thank god, because what ended up coming out in the second draft was much better than the first.”

Wrobel’s thesis turned into her debut novel, Darling Rose Gold. The book hit shelves in the United Kingdom on March 5 and in the United States and Canada on March 17.

Darling Rose Gold is about a complex relationship between a mother and daughter. The mother, Paddy Watts, suffers from Munchausen syndrome by proxy, a mental health illness that causes a caregiver to fake or induce sickness in the person they are caring for. The illness leads her to treat her daughter, Rose Gold Watts, as if she were severely ill for the entirety of her life, when in reality she is healthy. Paddy is arrested for the crime and after she’s released from prison, Rose Gold takes her in, leaving the whole town to question her reasoning.

Professor Rick Reiken told Wrobel that the first draft of her thesis read like a case study of Paddy’s disease, MSBP.

“The story wasn’t taking off because it was spending too much time having a character just discover [MSBP]. I think one of the things that I suggested to her was to not dwell on it as much, and to try to get more towards the story of the aftermath of Rose Gold and her mother,” Reiken said in a phone interview.

Wrobel didn’t want her novel to read like a case study, and instead wanted to discuss the consequences of MSBP.

“I kept Patty and Rose Gold, primarily because they are the story,” Wrobel said. “I wanted to write a story about the consequences of MSBP and how someone with the syndrome thinks and operates.”

The inspiration for Darling Rose Gold came after Wrobel spoke with her best friend, an elementary school psychologist in Colorado. Her friend discussed that through her work, she had met parents she suspected might be suffering from MSBP.

“I was just super interested and also horrified and so I started doing my own research and I was really surprised that it’s usually women who commit these crimes,” Wrobel said. “I just thought it was really interesting because when we think of violent crimes it’s usually men that commit them, so it’s strange that this one is so largely done by women.”

Wrobel conducted her research on MSBP while taking classes at Emerson. She read Sickened: The Memoir of a Munchausen by Proxy Childhood, Playing Sick?: Untangling the Web of Munchausen Syndrome, Munchausen by Proxy, Malingering, and Factitious Disorder, and news articles that document cases of the illness.

“I just wanted to get inside the head of one of these women and figure out to what extent she knows she’s lying versus like honestly believing she’s doing what’s best for her child,” Wrobel said.

Wrobel said she enrolled in Emerson’s Creative Writing MFA program with the goal of coming out with a finished novel.

“From the very beginning when I first got it, the project had promise,” Yoshikawa said in a phone interview.

During Wrobel’s thesis defense, Yoshikakwa and Reiken both gave Wrobel feedback on her novel. They encouraged her to take the manuscript to agents and see their responses.

“I chose her based on her track record, and also she and I immediately had the same vision for my career as a writer,” Wrobel said. “We got along really well and I could tell that I would do well in her corner.”

Wrobel and Milburn agreed she needed to work on filling minor plot holes within the story. Wrobel said manuscripts usually need more significant changes, but her manuscript had been polished after working with Yoshikawa for a year.

In the publishing industry, auctions occur when more than one editor is interested in making an offer on a book. When Milburn distributed the manuscript to editors, eight in the U.K. took part in an auction.

“You go around and you meet the different teams, which is really cool and very—not intimidating, but just overwhelming, because as a writer you’re very used to just constantly being rejected,” Wrobel said. “So to suddenly have a number of people interested in publishing your book, is just like the best feeling in the world.”

After Wrobel signed with her editors, she worked with them to make minor changes to the manuscript.

“I worked primarily with the U.S. and U.K. editors on editorial changes,” Wrobel said. “Plot-wise nothing major changed, just kind of more character development changes, but nothing big.”

Wrobel said this process took approximately six weeks. She then verbally accepted book deals from the U.S., U.K., and Canada on March 8, 2019. Publishing houses Michael Joseph and Berkley, imprints of Penguin Random House, published the book in the U.K. and the U.S. respectively while Simon and Schuster published it in Canada. Wrobel said the novel is titled The Recovery of Rose Gold in the U.K. because she and her publishers decided it is what’s best for their market.

Concerns backed by COVID-19 canceled Wrobel’s week and a half U.S. and Canada book tour, which was scheduled to begin March 30. She said her publicity team scheduled virtual events, such as Instagram takeovers and Facebook live sessions to replace the book tour.

“It’s a bummer because getting to meet readers is probably one of the coolest parts about writing a book,” Wrobel said. “I’m hopeful that once this all goes away, hopefully in the future there will be more events and stuff like that.”

Wrobel is currently working on the second draft of her second fiction novel, which is about a cult-like wellness center set on an island in Maine.  The story is told from the points of view of a leader, a member, and the member’s sister who is trying to bring her home.

Wrobel said she has been taken by surprise that her second novel is more difficult to write than Darling Rose Gold. She said it will probably come out in the U.S. in the summer of 2021. Wrobel hasn’t set a date for when it will come out in the U.K.

“To have written one [book] to finish and to be able to hold it in front of me does give some sense of confidence that, I’ve done this before, I can do it again,” Wrobel said.