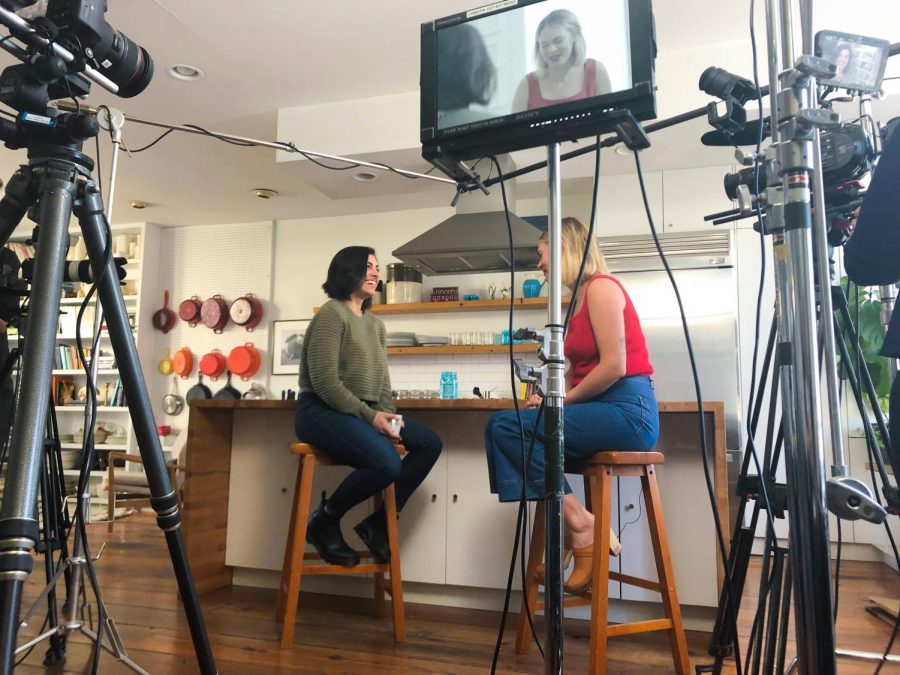 After being assigned to watch Anthony Bourdain’s television shows for a class, Marina Starkey ‘15 began asking questions about how gender influences the food industry.

“I noticed [Bourdain] has pretty much unlimited access to all of these different places and these people as a white man traveling the world,” Starkey said in a phone interview from New York. “How would it be different for a woman experiencing those same cultures? What wouldn’t she have access to? Where would she be relegated to?”

The questions developed into a documentary series Starkey created called SIMMER, which showcases the narratives of women’s experiences within the New York food industry. The documentary is in post-production, although Starkey says the COVID-19 pandemic delayed development and put on hold contacting film festivals and TV production companies. Producers of SIMMER plan to release small clips, called The Spark Series, from interviews that did not make it into the trailer to generate more attention to the project.

In 2017, Starkey originally wanted to showcase the female experience in the food industry on a global level. After the #MeToo movement began developing, she narrowed the scope of her project to the sexual harassment many female chefs experience in New York.

“[I] wanted to highlight women in an industry that predominantly favors men, highlights men and celebrates men,” Starkey said. “Despite women being the purveyors of the domestic space, they have a harder time making it in a professional realm.”

The eight-part series features 16 interviews, each episode showcasing the perspective of a woman or nonbinary person from a different part of the food industry. Starkey said sexual harassment for women exists in all positions, regardless of the power a woman has.

“I reached out to pretty much every woman in New York who works in the industry—executive chefs, business owners, journalists and celebrity chefs,” Starkey said. “I probably emailed about 75 people, trying to get a broad range of perspectives. [I] even heard from people who were adamant about not making [the series] about being a woman. I wanted to make sure I got a wide range of perspectives.”

This led to showcasing some perspectives that Starkey did not agree with, particularly with interviewing celebrity chef Sara Moulton, one of the founders of the Food Network. Starkey said that during her interviews, Moulton expressed that sexual harassment was just a part of the food industry’s culture. Moulton could not be reached for comment.

“[Moulton] said that as long as everyone was in the game together, it was fine and a part of working in a restaurant,” Starkey said. “But, you can’t ever be sure that everyone is in it together and everyone is enjoying it together. Like, this is not how it works.”

Starkey’s intended audience for the documentary is working women, but she wants everyone to see the film because she feels it is important to understand the power structures within the food industry.

“I don’t think you have to be in the restaurant industry to understand and empathize with the story being told and to connect with the women we showcase, because women experience this at every level no matter where they are,” Starkey said.

Co-executive producer Mark Millner could empathize with the stories even without prior experience in the food industry.

“Hopefully, I think by being an outsider, I could put myself in the shoes of the audience a little bit more and help sort of guide it from a story point,” Millner said in a phone interview from Los Angeles. “Like, what might be a given to the people in the food industry that someone outside of it might not know?”

Starkey started at Emerson as a journalism major, but switched to writing, literature, and publishing in her junior year. After graduating, Starkey earned her masters degree in gastronomy at Boston University to build a career in food media. Starkey then worked as a chef in various restaurants and started up her own catering company called Marinated by Marina. She now works as a chef at Heard City, a recording studio in New York City.

Starkey said the themes of sexual harassment in the documentary are personal for her due to her experiences working as a chef in Boston and New York. She decided to incorporate this into her interviews in order to make the women feel more comfortable sharing their stories.

“I would share who I am,” Starkey said. “I’d share my own experiences and share why I was doing it, which, of course, then more people felt more comfortable opening up to me because I had been there with them as well.”

Starkey said that the interviews were long and emotional for everyone involved. The crew that worked on set was entirely female and some members were particularly drawn to the stories, as they also experienced similar situations in the food industry. The idea of empathetic leadership resonated particularly with co-executive producer Julia Dickerson, who waitressed in Boston.

“Chefs yell a lot,” Dickerson said in a phone interview from New York. “It’s a very male culture in there, which I am very soft and don’t respond well to. So it was super cool just to have all of these women just to talk about how focused on empathy they were and how they could be kind leaders who were making their employees and staff feel comfortable.”

Dickerson said feminine traits such as empathetic leadership are often discounted, and through her experience on the set, she felt empowered by the worth of feminine traits being acknowledged.

“It made them seem very valid and important and equal standing to any sort of masculine traits people associate with kitchens,” Dickerson said.

Starkey said a major takeaway included learning of the role of women in gendered dynamics. She explained how women in positions of power are required to reduce their feminine traits in order for a man to promote them to the position they are in.

“We all play this game, and it is essential that we are aware of it,” Starkey said. “And once we’re aware of it, we can start to break down those structures that have been in place for so long.”

Starkey said that the food industry recently began to change how it treats women. She cited examples of some restaurants providing workers with more health benefits and child care. However, due to financial difficulties, these benefits aren’t extended to every restaurant.

Starkey said the documentary shows this shift in the food industry, while also recognizing that it still has room for growth.

“I want to do this not because I want to capitalize off this moment, but because I really believe in these stories and believe that this industry can be much stronger than it currently is,” Starkey said.