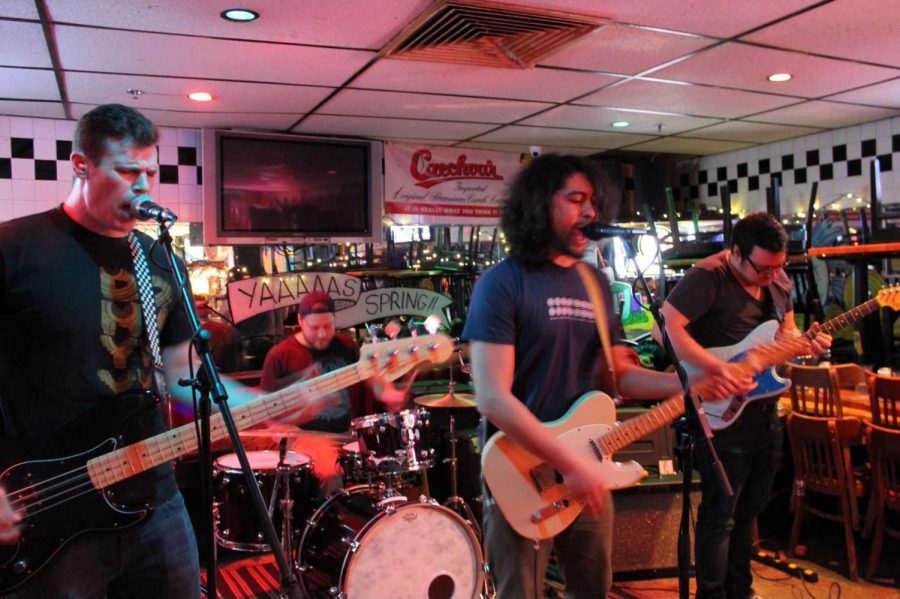 Boston-based rock band, Bulletin, formed by two Emerson alums in 2015, is set to release their debut album, “Hiding to Nothing,” on Oct. 1.

The idea for Bulletin came about when John Young ‘08, was working as a tour guide for a sight-seeing trolley company on Long Wharf in 2015. There, he met Berklee College of Music graduate, Matt Powell, who he bonded with instantly.

“Each of us had musical backgrounds, but we’d never collaborated,” Young, a visual media arts major, said. “I was looking for a rehearsal space and Matt invited me into his. We started working on some of the new songs he was writing and both agreed that we should get some other musician friends of ours involved.”

The band expanded quickly. Jon Hoffman ‘06, a writing, literature, and publishing, and new media production double major, joined the band after hearing about it from Young and Powell.

“I immediately signed up to start playing once I heard the initial demos,” Hoffman said. “I was already a fan of Matt’s other projects and John had been my go-to drummer to jam with for about 4 years or so at that point.”

“I experienced an electric chemistry between us,” he continued. “We just hit it off.”

Bulletin consists of four members — Hoffman, Young, Powell, and Dave Khostinat. Khostinat joined the band not long after Bulletin came to be.

Powell acts as a multi-instrumentalist along with Khoshtinat, a former member of the punk band, SuperVolcano, who Powell splits lead vocals with. Young plays drums for the band and Hoffman plays guitar.

“Matt and Dave are fantastic songwriters and it’s always exciting to get in the same room with these guys and start jamming and writing,” Hoffman said.

It’s that same excitement that the band hopes will shine through on “Hiding to Nothing,” Bulletin’s first project since their 2017 EP “Not From Here But I Call This Home.” The band’s members said the album is a coalescence of their lives— their day jobs, their families, the passion each member has for music, and more recently, the COVID-19 pandemic.

“It’s really a reflection of the times we’ve been going through since writing the songs together during pre-COVID times and during the whole process of recording, mixing, mastering, and promoting during a pandemic,” Hoffman said. “Lyrically and musically, it shows the bittersweet message of trying to balance the artistic desire that we have with what we must do during the week to keep the lights on, the fire lit, and pay the bills.”

Young explained that the album is about “being worked to the bone.”

“Hiding to Nothing,” which took about three years to complete, consists of 10 songs. The first single off of the album, “Head on the Ground,” is available for streaming now.

“Head on the Ground” showcases how much Bulletin has grown since their 2017 EP. By having the same attitudes of the grunge era without the abrasiveness, it emulates the post-grunge sound of the mid-to-late ‘90s. The single brings the likes of Foo Fighters and The Smashing Pumpkins to mind. It features steady and tight guitar riffs, Young’s punchy drum beats, and low, rhythmic vocals courtesy of Powell and Khoshtinat.

The band submitted the single to Emerson’s radio station, WERS, for their evening program titled Wicked Local Wednesdays, where the station devotes a block of programming to Boston-area artists.

“Some people have described the EP as being [more raw] and in your face alternative rock and punk: buzzy, distorted, warm, and guitars up front,” Hoffman said. “In a lot of ways, the writing and playing have matured since then and I think [the album] is going to appeal to universal tastes.”

Young said the main difference between “Hiding to Nothing” and the EP is the lyricism.

“Matt’s songwriting has matured a lot,” Young said. “When we started, Matt had never been the principal songwriter in a band; he grew a lot in a few years.”

Hoffman credits the raw, unapologetic, and pure nature of the ‘80s and ‘90s rock scene as the inspiration for the sound “Hiding to Nothing.”

“I don’t want to completely speak for the other members, but I can say that I’ve been inspired a lot by early 90s rock/shoegaze, folk, and even classic rock,” Hoffman said.

While Bulletin is officially labeled under the punk/noise-rock genre, Young likes to think of Bulletin as a band that blends different genres of music together.

“I suppose we could be described as an independent…alternative rock band, but genre-bending sounded sexier,” Young said. “A few of us have heavier, metal/hardcore backgrounds. We appreciate and enjoy music across multiple genres…we have our own sound, which I’m really happy about.”

“Hiding to Nothing” brings the diverse tastes of each of the band’s members into the mix.

“I think we all have a wide array of musical influences, and it really shows in this release,” Hoffman said.

When they aren’t busy working on music for Bulletin, Hoffman and Young carry on with their day to day lives in the workforce or with their families.

Hoffman works as a Senior Web Designer in Boston, and completed his Master of Business Administration at Clark University. Young is busy with his family as he balances music and raising children amidst a pandemic.

The music profession nowadays can often make artists feel burnt out, as everything is hyper focused on the number of streams a song gets or follower counts. However, Bulletin reminds audiences that a passion for music is all you need to pursue an interest in the field.

“The music industry can be pretty unforgiving, especially in the Boston scene, but I don’t think any of us would trade it for the world,” Hoffman said.