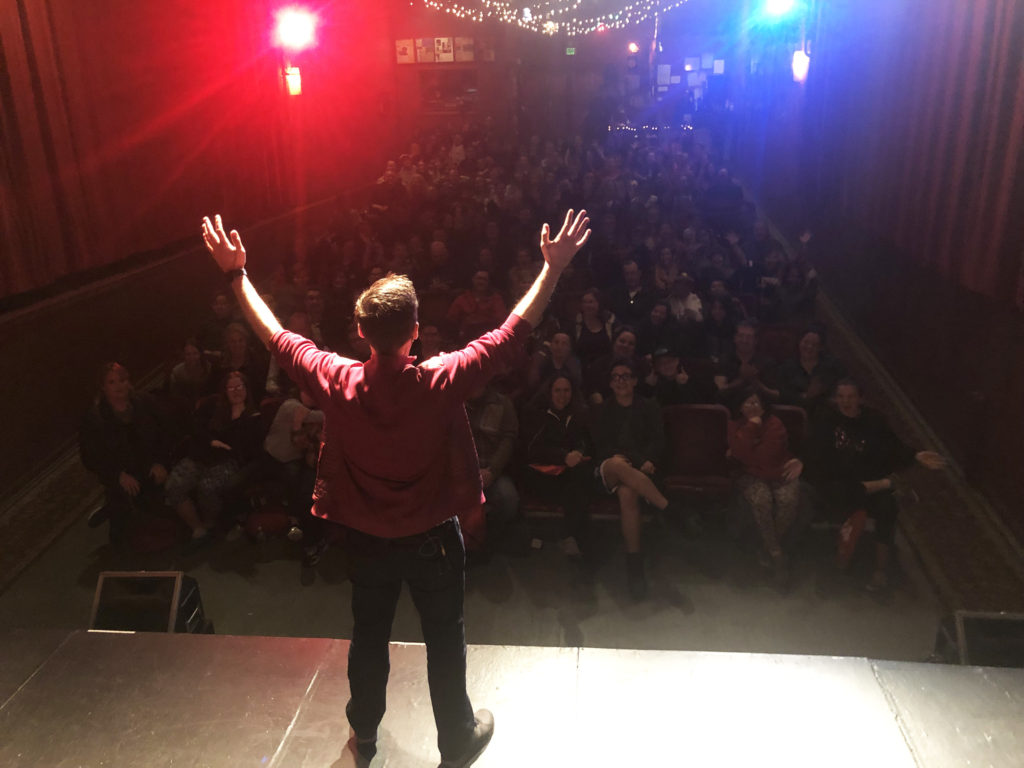 Clark said he loved what he used to do, but gaining traction on YouTube began allowing him to reach a larger audience and eventually tour the country performing in venues.

Over 4 million people subscribe to Clark’s YouTube channel, “It’s Alex Clark,” where he posts weekly comedic animation videos that he creates with other animators, like “My hangry Uber pool story” and “How I met my cute wife.” Clark collaborated with Chris Taniguchi, Francis Dauphin, Jeff Fam, and Penny Lane Morales on these videos.

In addition to his YouTube, he began a nationwide stand-up comedy tour on Jan. 18 that just wrapped up on March 31.

Full-time and part-time animators collaborate with Clark on his videos but he writes the scripts on his own. The animations focus on the most relatable experiences of Clark’s life.

Clark started his YouTube channel in 2009 and released his first video called “My Hot Babysitter Got Me In Trouble” on Oct. 25, 2017. Clark gained enough subscribers by releasing the viral video and made YouTube his full-time job. Within two weeks of releasing his first video, he gained 1 million subscribers. That same video surpassed 30 million views at the time of publication.

Clark’s main goal when he started his YouTube channel was to find a platform where more people could discover his work, so that he could garner a fanbase that would come to his stand-up shows.

“I was mostly excited that I would get people to come see me at a show, because I love being on stage,” Clark said in a phone interview from Los Angeles. “The whole reason why I started the channel, was to promote the fact that I performed. So when that finally happened it was like, ‘Oh my god I get to go on tour.’ So now 10 years later we finally did it, it’s probably the most exciting year that I’ve had on YouTube so far.”

Clark said he loves going on tour and performing for fans who make his success possible. Clark’s stand-up jokes revolve around internet culture and his rise to YouTube fame.

“I’m naturally more exciting on stage than I am in person and it just brings me to joy to make people laugh,” Clark said. “This is the first tour, but all the shows have been either sold out or 90 percent sold out, so I think we’re going to do it again next year in bigger venues.”

While on tour, Clark still manages to upload weekly videos to his channel.

“On the tour usually I fly out on Fridays at like six in the morning and then drive to the venue to perform and meet a bunch of wonderful fans throughout the week,” Clark said. “Then Monday, I fly back into Los Angeles and meet my animators back at the office to coordinate with animation and storyboarding for the next video.”

Clark said he feels extremely thankful for his time at Emerson and the connections he made there.

“Emerson’s good because you meet a bunch of people and you help each other get places,” Clark said. “Emerson gave me an amazing experience and I would not be where I am today without it, but I mean if they want to refund my student loans I’d love that.”

Christian Taniguchi graduated from Laguna College of Art and Design with a BA in animation in 2016. Soon after, Taniguchi began working with Clark, when he still had only 300,000 subscribers. Two and a half years later, Clark and Taniguchi, the lead animator at his studio, still collaborate on weekly YouTube videos.

“Over the years we got more in tune with each other’s styles and learned each other’s strengths and weaknesses,” Taniguchi said. “It’s a lot more fun now because we know how to do everything.”

“When [Clark] records he does it in this closet that got renovated into a sound studio and he won’t exactly tell me what the next script is going to be about until it’s ready,” Taniguchi said. “So sometimes I’ll just hear him yell the weirdest things in this closet and it’s the funniest thing.”

Clark’s assistant, Emerson writing for film and TV graduate student Courtney Burneff, took the lead role in planning the tour by booking theaters and working out logistics. The two met through a mutual friend who told Burneff about Clark’s need for an assistant, and her previous involvement in animation and script writing made her the perfect match.

Burneff said she will see Clark perform for the first time at his last show of the tour in Los Angeles, where Clark resides, on March 31.

“I love my coworkers and the environment we work in, we’re actually all going to see [Clark’s] show together on March 31 in LA,” Burneff said. “It’s really nice to work in a place where people are cool to hang out with and you’re not counting down the minutes till you want to go home.”

Clark said he loves meeting fans and performing on his first tour, even if it means life feels a little hectic.

“It’s very exciting to meet everybody on tour and honestly anything that is hard is completely erased by how exciting it is to meet fans,” Clark said. “It has been nothing but pure joy.”