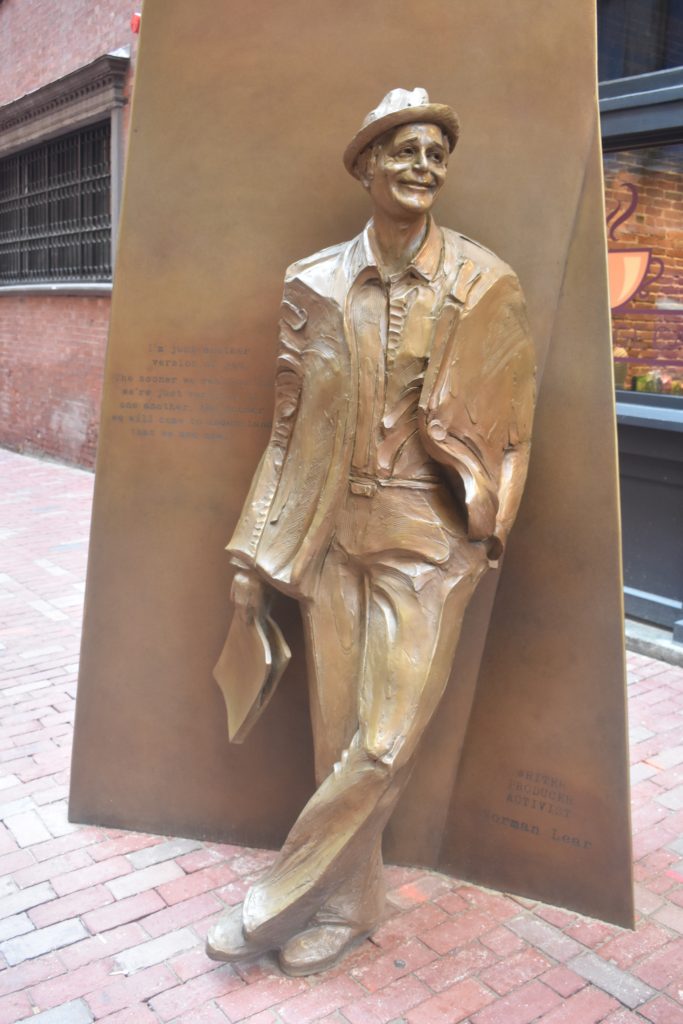 The college unveiled a statue of alumnus Norman Lear—the first of its kind on campus—in the Boylston Place Alley on Thursday, Oct. 4.

Hundreds of people, including Norman Lear, his family, President M. Lee Pelton, and a representative of the mayor of the City of Boston, attended the dedication ceremony and witnessed the uncovering of Lear’s statue. The college commissioned the artwork to honor Lear’s dedication to the television and film industry—two staple areas of education at the college.

The bronze sculpture portrays Lear, a producer of television sitcoms like All in the Family and The Jeffersons, relaxing with one hand in his pocket, and another hand holding the script of All in the Family, while he smiles and leans against one side of the bronze obelisk with a crossed leg. Three quotes from Lear are placed around the structure, as well as the names of his shows and imprints of his shows’ main actors’ faces.

“I’m just another version of you. The sooner we realize that we’re just versions of one another, the sooner we will come to understand that we are one,” sculptor Peter Schifrin’s said as he read his favorite Lear quote, located beside Lear’s figure.

Lear is one of seven individuals in the class of 1944 who studied theater. In 1942, after he heard the news of the bombing of Pearl Harbor, Lear decided to drop out of Emerson and serve in the Army.

Joyce Linehan, on behalf of Mayor Marty Walsh, officially proclaimed Oct. 4, 2018 to be Norman Lear Day in the City of Boston in honor of his contribution to the television industry and the nation. Mayor Marty Walsh called Lear a “living legend and a ground-breaker of television that makes us laugh, think, argue, imagine and wonder,” in a statement read by Linehan.

Pelton also announced the launching of the Norman Lear Scholarship Fund for first-generation college students or students from lower socioeconomic, underrepresented, or underserved backgrounds who are interested in pursuing a career related to writing.

“If you are a writer, write; if you are an actor, don’t wait for the phone to ring, don’t worry for the cast,” Lear said in an interview.

After the statue was revealed, Lear, 96, walked across the podium alone, stood beside the sculpture and simulated the statue’s posture.

Pelton, who said he still watches Sanford and Son today, introduced Lear at the event as the man of the century, a television legend, and activist.

“He was responsible for more than 20 films and 100 television shows that helped and shaped the face of American television, and transformed this nation as to introduce to all of us to a set of very complex ideas of what it means to live in a democratic society,” Pelton said.

Television Producer, Board of Trustees member, and Founding Director of Emerson Los Angeles Kevin S. Bright ‘76, who initiated the idea for the sculpture and contributed to the funding for the piece, said he realized there was no public art on the campus before the Lear piece.

“I really want to bring the symbol of the resurgence of Emerson pride and the realization that Norman works to create diversity on television which is still being done in the college,” Bright said in an interview.

Robert Friend ‘79, former president of Emerson’s Alumni Association and a member of the Board of Trustees, said in an interview he grew up watching Lear’s shows.

“He was impactful for our lives because of the impact he made on the culture of television as it relates to speaking to racism,” Friend said.

After the ceremony, guests were invited to enjoy the free dinner and some performances at Center Stage, where the space was turned into a house-like set in from All in the Family. Bright played videos from comedian alumni, including Jay Leno ‘73 and Andrea Martin ‘69.

The Dining Center served lobster rolls, steak, and root beer floats to students for free as part of the celebrations.

“We were here to celebrate your life with this beautiful sculpture,” Martin said. “But I want you to know that I celebrate you everyday when I turn on television because of what you did to the world.”

Lear burst into tears during one of the musical performances by the Department of Performing Arts, who put the theme songs from Lear’s shows into a musical medley.

“I am living in one of the greatest moments in my life,” Lear said at the end of the performances. “If there’s a luckier person than me in this world, I don’t know who it is.”