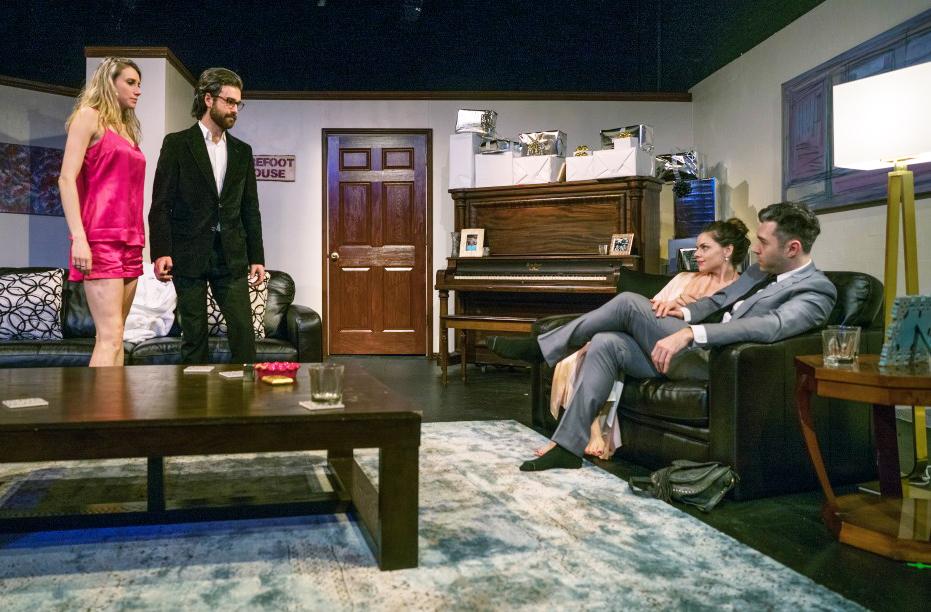 Kate T. Billingsley ‘07 laid on her back doing vocal warm-ups and tried to relax before her first off-Broadway performance of the play she wrote, Barefoot, when she realized that she was finally living her dream.

However, just two weeks before the Jan. 24 opening night, Billingsley had not written a single word of the Barefoot script.

In early December 2018, Billingsley auditioned and received a role in Theresa Rebeck’s Spike Heels, a play directed by renowned director and actor Thomas G. Waites. After almost five weeks of rehearsal, Rebeck pulled the rights to the production. They were set to open in less than two weeks.

“We were blocked, all set, ready to go,” Waites said in a WhatsApp video call from New York City. “We were just a few actors and directors sitting in a room going, ‘What the f— are we going to do? The theater is paid for!’”

Billingsley said she saw this hurdle as an opportunity to finally live out her dream as a playwright. She said she went home that night and wrote 70 pages of a script about a woman being confronted by her fiance’s mistress two weeks before her wedding and the sexually charged, outrageous series of events that follow as three men arrive at the scene.

“I went home and wrote for the actors that I was working with,” Billingsley said in a Skype call from New York City. “Stylistically, it is the most absurd thing I have ever written. When I was writing that in the early morning hours or late at night, all of my demons, my shadow side, my insecurities, my fears—it all poured into this play.”

The next day, Billingsley presented the night’s work to the rest of the cast.

She said the cast provided overwhelmingly positive feedback, including Elissa Klie, Billingsley’s co-star who takes on the role of the mistress, Teddy.

“It was definitely hands down the weirdest play I have ever read,” Klie said in a phone interview from New York City. “But we all agreed that this was the play we were going to do.”

“We both sort of became one person, and that person created what I think is a little off-Broadway success,” Waites said. “I have a good ear for dialogue and [Billingsley] has a good sense of character. So we leaned on each other’s strengths, and it led to a collaboration that I think is artistic.”

When the script was finally completed, the cast only had four days of rehearsal left before it was time to perform in front of a live audience. Billingsley, Klie, and Waites all said the cast was terrified.

“I was scared, but I was also trying to keep it together because I felt like I had to. It was terrifying,” Billingsley said. “We can either be scared and run away from it, or we can be scared and lean into it. Everyone leaned right into it, and that’s what made it be this little success off-Broadway.”

Billingsley, suddenly thrust into a leadership role, not only had to memorize her own lines and rehearse but also had to answer questions from other actors and address issues regarding the script.

But Klie said Billingsley was easy to collaborate with and handled the situation with humility.

“The way [Billingsley] carries herself is the way I want to come off to the world,” Klie said. “[Billingsley] is super intelligent and gorgeous and dives into things head on. She has what I consider the whole bag for what you need as an artist—her whole soul. Working with her has been absolutely fantastic.”

Despite the odds, an investor who saw and believed in Barefoot provided the money to extend the run by three additional weeks, Billingsley said. Billingsley said she believes the success came from the Barefoot script touching on what she calls a “millennial moment” of women discussing feminist issues and the playfulness of sexuality.

“This play also really reflects a level of absurdism that we are facing in day-to-day culture,” Billingsley said. “The fact that Donald Trump is our president is totally absurd, and yet it is a fact. So the wonderful thing about being an artist is that you can literally create anything, and it is possible that it is true. The absurdity that unravels in the play touches into some deep level of truth that the absurd can become reality.”

The play wrapped on March 2 at the Gene Frankel Theatre, but Waites said he hopes to keep the legacy of Barefoot alive by raising enough money to turn it into a film featuring the same actors from the off-Broadway production.

Billingsley said everything happened so fast that it was hard to keep track of the series of events.

“I don’t fully understand why the rights were pulled, but I do know it availed this really wonderful opportunity to fill this empty theater with a new piece of theater,” she said. “That really is the beauty of theater—it is transient and happens very quickly. It can never happen again the same way.”