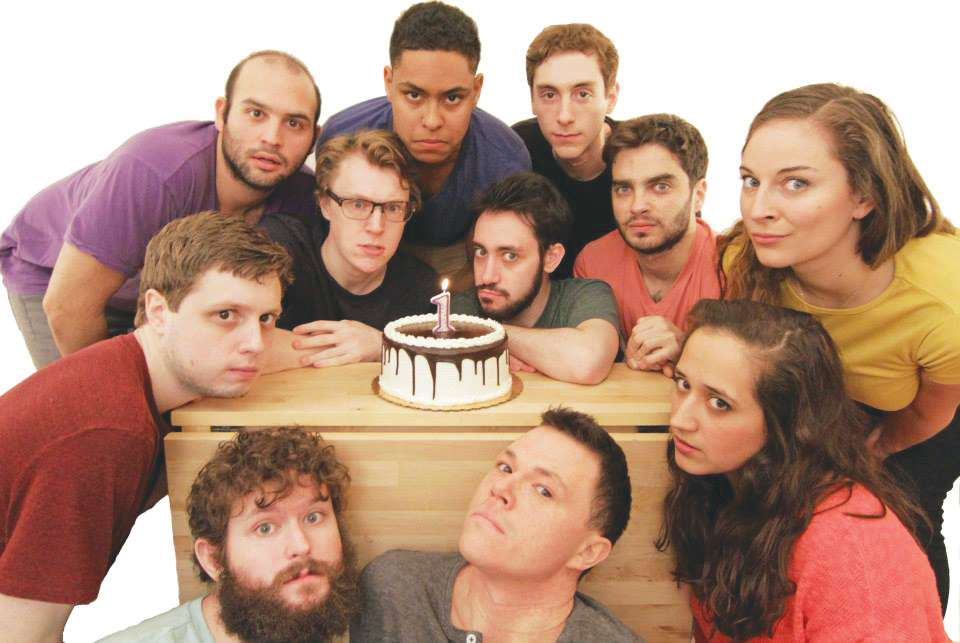 When several alumni failed to make the cut after trying out for Emerson comedy troupes their freshman year, they teamed together to form their own comedy sketch group, Dinner For One, in 2009.

Nine members—eight of them Emerson alumni who graduated in 2011 and 2012—officially formed the group and decided on the name during their junior year. The name, Dinner for One, encapsulates the feeling of loneliness that comes along with being an awkward preteen, troupe member Ian Wexler ‘11 said.

“It just summed up that feeling of being an outcast,” Wexler said in a phone interview from New York City. “Nobody wants to make a dinner reservation for one person.”

Dinner for One headlined for numerous sketch festivals, such as the Chicago and New York City Sketchfests, and had members’ sketches appear on Funny or Die and HuffPost Comedy.

Since their time at Emerson, the now New York City–based comedy group wrote, produced, and filmed their own series, Life Sucks which was released in November 2018. The series has almost 10,000 views combined on YouTube.

The series explores the lives of three outcast preteens as they deal with the embarrassing aspects of puberty. The characters are exaggerated versions of the actors themselves who share the same first name with the main characters, troupe member and Life Sucks star Ally Condrath ‘11 said.

The group’s own adolescent experiences largely inspired many of the storylines in Life Sucks, which is set in 2001, Condrath said.

Dinner For One created the series without any help from a production company. The six-episode series directed by Wexler was collectively written by the troupe and produced by Kyle Miller ‘11 in 2013.

The group initially auditioned with companies such as Comedy Central and TBS in hopes of professionally producing Life Sucks, troupe member Jake Mann ‘11 said. Condrath said that, after five years of meeting with various production companies, they decided to release the series themselves on YouTube.

The group initially raised $30,000 through the fundraising website Indiegogo for production expenses. On the last day of fundraising, they were still $50,000 short of their $85,000 goal. Together, they raised $10,000 within the last two hours of the fundraiser.

“So, in the last 20 minutes of the fundraising, we were scrambling,” Condrath said. “We reached out to Emerson alumni, our friends, anyone we could and, in the end, we had raised $85,000.”

The Dinner for One members wrote all six episodes within the span of a month in the summer of 2013, immediately before filming began. Mann said the members filmed the school scenes at a middle school later that summer and shot residential scenes in fall 2013—both in Brooklyn.

Mann said the filming process ended up being the most difficult part because they wanted to finish all the shooting before students went back to the middle school.

“We had to work around summer classes and were constantly asked to move spaces. If there was only one reason why someone would hesitate to make their own show, this is it,” Mann said. “Shooting is probably the hardest part about producing a show.”

The series was finally released on their YouTube channel in November 2018, five years after the filming ended.

Due to the limited budget that went toward the production, all actors worked voluntarily. Many of the characters on the show were played by teen and child actors. Throughout the shooting process, younger actors had the opportunity to participate in an acting summer camp program. Dinner for One provided the program by using 10 percent of the money they raised online.

“Something really cool about our set was that everyone who worked with us wanted to be there. People showed up every day because they wanted to be a part of it,” Mann said. “Because modern television is being overshadowed by streaming services like Netflix and Amazon Prime, getting a production company to pick up a television show has become increasingly more difficult.”

The group has no plans to continue with a new season of Life Sucks because of the difficulties that come with producing a series without the help of a producing network.

“These companies want to be sure that a show is going to be successful because of the way that television has changed,” Condrath said. “It has to be a sure thing. Obviously, I would have loved to have been picked up by a company like Netflix, but we’re all still happy with how our show turned out.”

Condrath said the members are focusing on their upcoming live comedy shows instead of continuing Life Sucks. Members from Dinner For One have performed at a New York City comedy club, People’s Improv Theater, for six years.

“Something I realized when I came to Emerson was that I’m not special,” Mann said. “There were so many other students who could do what I was doing.”

Members of the group have fostered lifelong relationships together since they met at Emerson. Condrath and Miller married in 2017, and all of the members live in Brooklyn.