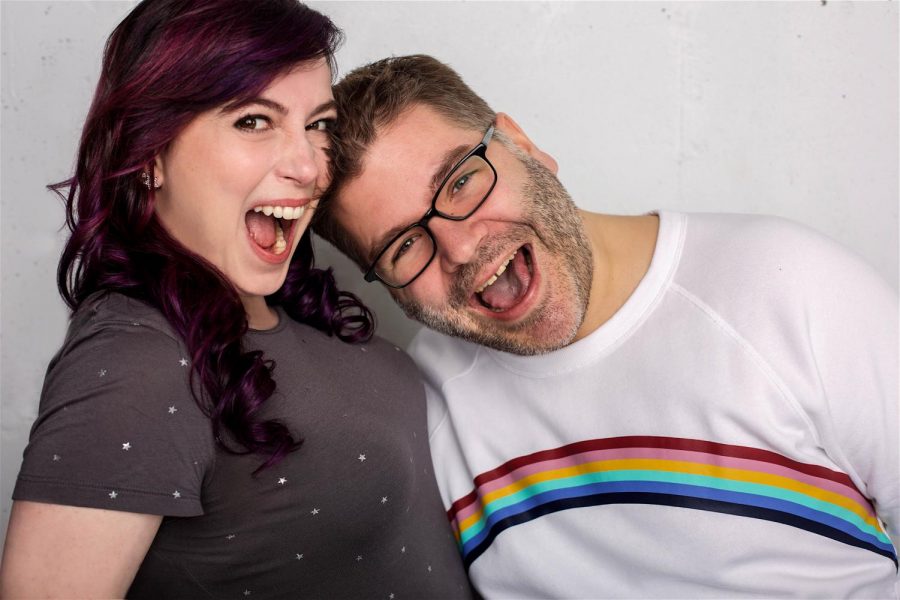 Though Emerson alum Patrick Hinds ‘96 graduated with a BFA in performing arts, he spent his college years unsure of his future. He explored his interests through radio and TV internships, which landed him a full-time news associate at CNBC in New York City. After realizing he didn’t want to work for corporate television, he quit his job a year later to focus on what made him happy.

“I was pretty unhappy [at my job], so I left,” Hinds said in a phone interview. “I wanted to pursue more creative endeavors so I got a job in a restaurant and started writing [books] and I kind of just kept going [until] I discovered podcasting in 2009. [Podcasting] went from being a very passive ‘I enjoy doing this’ to an obsessive ‘Not only do I love doing this but I love the industry.’”

Each episode of the podcast ranges from 55 to 65 minutes, and focuses on a specific crime documentary film. Clips from crime documentaries are interspersed with comedic descriptions and commentary provided by Hinds and Pensavalle.

Hinds said that he didn’t discover his love for podcasting until 2009 when he started listening to Downstage Center, a Broadway podcast by The American Theatre Wing that included interviews with Broadway actors about their careers.

As a Broadway enthusiast himself, Hinds decided to continue the premise of Downstage Center with his own podcast—known as Theater People—after it was discontinued. After a few months, he realized that he loved podcasting and wanted to continue it for a living.

“I think when I discovered I could put a microphone in front of my face and I could put my actual voice out into the world…that really spoke to me,” Hinds said. “And I think that’s why podcasting stuck in a way that writing didn’t.”

“[While] Broadway is a love deep in my soul, I was able to focus more on podcasting as a business and as something I could do to make a living, and that’s why I sort of pivoted towards true crimes podcasts,” Hinds said.

In 2018, Hinds and Pensavalle began live shows at conventions in cities across the U.S., which evolved into a tour to coincide with the podcast itself. The shows are a live version of the podcast that uses a screen to play clips from the documentary rather than just the audio.

“We sort of go through it and we laugh at ourselves, about how angry we get, and we laugh about any of the things in the documentary other than the crime or the victim,” Hinds said. “The stuff that we’re poking fun at are if the documentary was made poorly or things like that. It’s pretty different from anything else out there and we love it.”

Hinds and Pensavalle’s True Crime Obsessed tour is coming to the Royale in Boston on March 20. Hinds and Pensavalle are joined on the show by Tim Pilleri and Lance Reenstierna, the hosts of the Missing Maura Murray podcast, and the radio producer and TV documentary host of Oxygen’s The Disappearance of Maura Murray, during which the local Maura Murray case will be covered.

Pensavalle said that touring adds to the connection that she and Hinds have with fans of the podcast, as well as adds a visual element to the podcast experience.

“Something that we take really seriously and take as a really big compliment is that people feel like…they’re just hanging out with their friends while Patrick and I break down these documentaries [in the podcast],” Pensavalle said in a phone interview. “Patrick enjoys my reactions to things, and eye rolls don’t really translate over podcasting so people like to see us actually react and have physical reactions that you can’t see on the podcasts.”

True Crime Obsessed viewership grew from only 349 viewers in their first preview podcast in 2017 to a record 6,034 in episode 121 in 2020. As the podcast grew in popularity, Hinds’ husband Steve Tipton, who has a background in business and finance, began managing the podcast in 2018. In early 2020, Hinds and Tipton established Obsessed Network, a podcast network that provides a platform specifically for true crime podcasts, including True Crime Obsessed.

Hinds and Pensavalle covered the 2017 Netflix documentary Abducted in Plain Sight in December 2018 on True Crime Obsessed. Documentary director of Abducted in Plain Sight Skye Borgman said that Hinds’ podcasts, as well as the Obsessed Network, provides a great platform for different approaches to true crime podcasts. She said that the comedy of the podcasts creates an easier and more digestible conversation about sensitive topics, such as child sexual abuse.

“I think it provides this great community really for people who love true crime, for people who had trauma in their lives and just need to be able to move on from it,” Borgman said in a phone interview. “So you can listen to something funny about it and have a choice of different approaches while still talking about some really important things.”

On March 2, 2020, Hinds released the network’s first original podcast series called Obsessed With: Abducted in Plain Sight. The four-part podcast for the 2017 Netflix documentary Abducted in Plain Sight is about a teenager from Idaho in the 1970s who was abducted by her neighbor on two separate occasions. Hinds and Borgman speak about the details of the story that were left out and discuss the updates on the case.

“The biggest one was trying to get a little more insight into the parents. I think people felt there was more to the parents, like there was something more that they knew,” Borgman said. “A lot of people really wanted to know how Jan is doing now, so we were able to kind of talk to her and ask her some of these burning questions too about her dad and her mom and how everybody’s doing now.”

Hinds currently lives in the theater district of New York City with his husband, whom he met 13 years ago on MySpace and Match.com, and their six year old daughter Daisy.

“We feel lucky about our lives, we live right in the theater district in Manhattan [and] we love going to the theater,” Hinds said. “There’s a lot of art and success surrounding [Daisy at school] and we feel very lucky about that. We work really hard at our jobs but we also have a great family life and we just couldn’t be happier.”