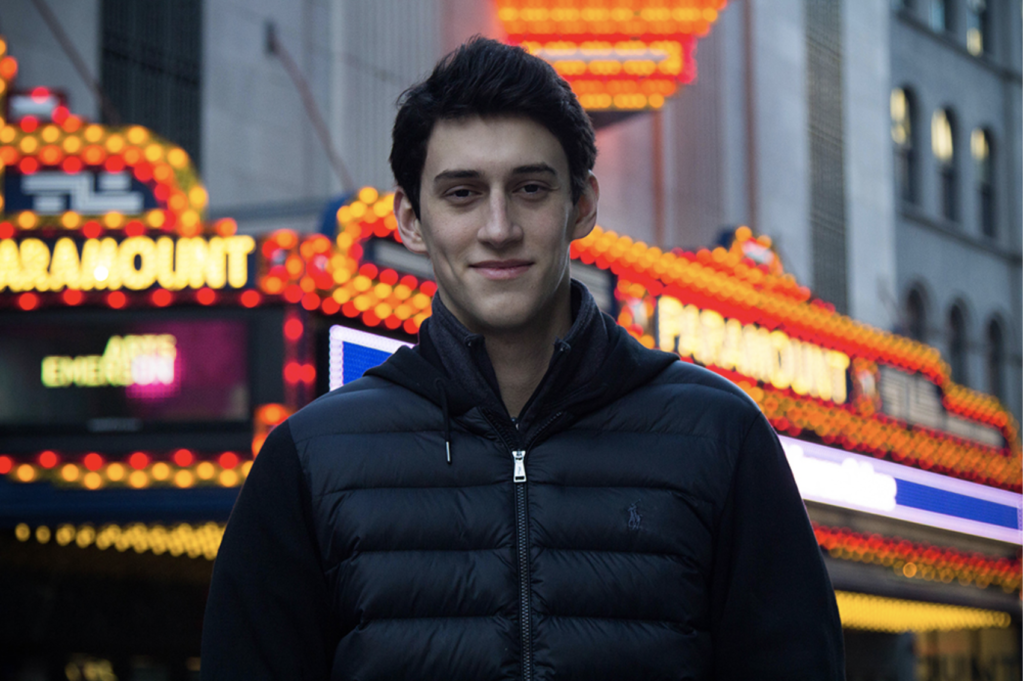 Amigos, Emerson’s Latinx cultural organization, presented the movie in the Bright Family Screening Room. Amigos President Juan Coral said the event was organized after Espinola told the group about the film and showed them the trailer during a meeting.

Saber Crecer is Espinola’s first feature film. Prior to the screening, the visual and media arts major told the audience the budget was $10,000 and that private sponsors funded the production. After the showing, co-director, co-writer, and actor Espinola answered questions from the audience.

The coming-of-age story follows high school senior Danny as he struggles to confess his love for his best friend Claire before he leaves Paraguay to attend college in America. Espinola plays Cameron, an American party lover and Danny and Claire’s friend.

“I’m kind of like him but less douchey,” Espinola said during the Q&A.

Espinola said he started writing the screenplay January 2017. The final film was finished in early August.

Espinola told the audience the title translates to “Knowing to Grow,” which reflected the filmmaking process. He said he made two short films before Saber Crecer, but he and the crew still had to learn on the job.

“We really went into this movie with no experience at all in anything,” Espinola said. “It was a crazy ride.”

Espinola said the oldest person involved in the production was 21 and the youngest was 16.

“That’s actually how we marketed the movie in Paraguay. That was the focus,” Espinola said. “First movie made by young people.”

Espinola said building up the Saber Crecer Instagram profile and releasing a trailer on YouTube were crucial to gaining sponsors and a distributer. Their Instagram has 1,870 followers and the trailer has over 24,000 views.

The film features both English and Spanish dialogue. Espinola said the movie is bilingual because he wanted the film to stand out as much as possible.

“All Paraguayan movies are the same,” Espinola said. “All they deal with is poverty and stuff like that. And those are realities that we have in our country, but we wanted to make something different, something that showed a different reality.”

Espinola said Paraguay’s film industry is tiny, and he wants to help it to grow. He said he attended the premiere and one regular showing.

“From what I could tell, the adults were laughing at my jokes, which are really crass and really nasty,” Espinola said. “But the adults were still laughing, so I’m going to take that as a good response. I know with young people it went over really well.”

Espinola said the biggest challenge was post-production, particularly creating a digital cinema package, the typical format for movie projection in cinemas. He said at one point the crew lost the majority of their edited footage when their only hard drive crashed.

“There is so much technical stuff that you just don’t know going in,” Espinola said. “You just think you’re just going to make a movie. It’s not that simple. There’s a lot of stuff that has nothing to do with actually making the movie that you have to do.”

Espinola said information is readily available on the internet and people should create what they want to even if the task seems daunting.

“We were like, ‘I don’t know if we’re going to get this made.’ But we just continued and we got it to theaters,” Espinola said. “So my biggest advice is just follow through on your projects. Don’t give up on them so easily.”

After the event, Amigos President Juan Coral said he loved Saber Crecer and was impressed by the production, especially since it was Espinola’s first film.

“[The audience] had a really good response,” Coral said. “People were laughing.”

Shane O’Neill, a junior visual and media arts major who attended the screening, is a member of Amigos and a friend of Espinola. O’Neill said the film is impressive for a 19-year-old’s first feature length film.

“He’s only done small short films before and this is a pretty big piece to put together,” O’Neill said. “I think it’s very impressive.”