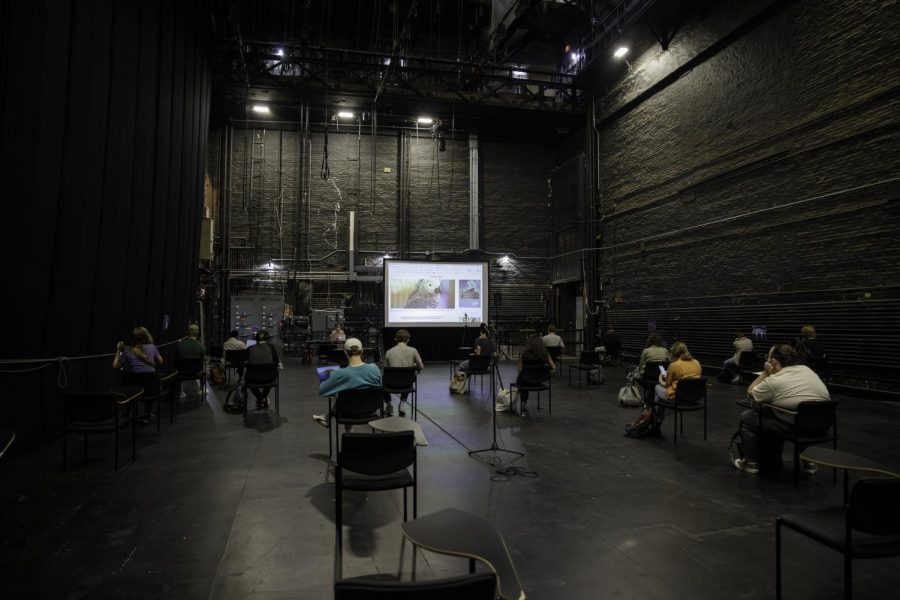 A Visual and Media Arts class under COVID-19 safety restrictions.

The college’s plan to extend “flex” learning, a mix of virtual and in-person classes, into the fall 2021 semester was met with a mix of approval and disappointment from Emerson community members.

Fall 2021 will be the third semester to follow the “One Emerson Flex Learning” model first developed in Summer 2020, according to a Monday morning email from President M. Lee Pelton. The move to extend the hybrid plan comes despite predictions from some public health officials that a large portion of the population may be vaccinated by late summer or early fall of this year.

Though the college is preparing to start the semester with hybrid learning still in place, it could potentially transfer to fully in-person classes before or during the semester if guidance from public health and government officials suggests that it is safe, the email stated.

Many community members The Beacon spoke to said they were expecting the college to continue with hybrid learning into the fall semester.

Luke Colombero, a first-year theatre and performance major, said the decision to stay hybrid for the start of the Fall 2021 semester didn’t come as much of a surprise to him.

“It’s honestly safest for us in my opinion,” Colombero said. “Even if we all get vaccinated, there’s still always the risk of a new [strain] of COVID. While it is disappointing, it’s not anything new for us, all the [first years] at least, this is already what we’re acclimated to.”

Qingshi “Rocky” Meng, a first year theatre and performance major, said he was saddened by the decision to start the fall semester under the hybrid model.

“While I was disappointed, it’s kind of expected,” Meng said. “The death toll just passed 500,000. It’s not going to suddenly go downhill.”

Pondering the motivation of the college, some believe monetary incentives played a role in the decision to stay in hybrid learning.

“Everything the school does is about money,” Bruce Kilstein, a graduate writing, literature, and publishing student and undergraduate professor, said. “[Emerson] said, ‘If we don’t have students on campus, we’ll lose millions of dollars,’ so any kind of model they come up with has to ensure that people are on campus.”

Sophomore visual and media arts major Leon Wenhao echoed Kilstein’s sentiment, saying he felt he was at a disadvantage due to the lesser quality of learning hybrid classes offer.

“Is [the] college doing this flex model as a way to care for us, or is this a way to have a thing on campus so that they can still collect our tuition check?” Wenhao said. “I’m learning something, but were the things I’ve learned worth $70,000?”

Due to the lack of preparedness for the spring semester and uncertainty surrounding vaccinations, some expressed caution about the decision, saying no one knows what the fall will entail.

“We don’t know how many people will be vaccinated, we don’t know what’s gonna happen with all the variants that are out there,” Kilstein said. “To achieve herd immunity, you need 80 percent of the population vaccinated, which is not a reality any time soon.”

First-year VMA major Marc Velez shared Kilstein’s concern, saying he’s not against another semester of hybrid learning, but cautious of their haste to make the decision.

“I wouldn’t say I’m against it,” Velez said. “They definitely should have seen how this semester was going to go about as far as cases go. Especially because it’s different from last semester. They don’t really know what it was going to be like, and it’s literally like a month into this semester.”

While some praised Emerson for its handling of the situation, others expressed distaste. One writing, literature and publishing professor who spoke to The Beacon on the condition of anonymity said the college’s attitude towards the pandemic is counterproductive.

“It feels like they don’t care about what happens to us, or to you all,” he said. “It just sort of seems like they made these decisions independent of what happens on campus and in the city.”

The professor said the paranoia of being infected has affected his well-being, and he hasn’t been able to sleep because of it.

“I can’t really focus on [teaching] when I’m scared of what’s going to happen,” he said. “If I get sick and can’t work, I’m screwed, and my family is screwed. Every time I have to go in, I can’t sleep.”

“The way last semester went didn’t inspire confidence, and the way this semester is going isn’t inspiring confidence,” the professor continued. “I don’t know why they think more of the same thing is a good idea.”

While some have their doubts about the fall semester, others are optimistic.

Sophomore Kathleen Nolan, a WLP major, said she is hopeful for herd immunity and vaccinations by September, but appreciates the college’s decision to “plan for the worst.”

Colombero said that he’s optimistic about the fall semester, predicting that as more information is released some assemblance of “normal life” will be restored.

“I think definitely starting [the semester in] hybrid is smart,” Colombero said. As we get more information about the virus and the state of our nation, maybe we can slowly break down all the rules.”