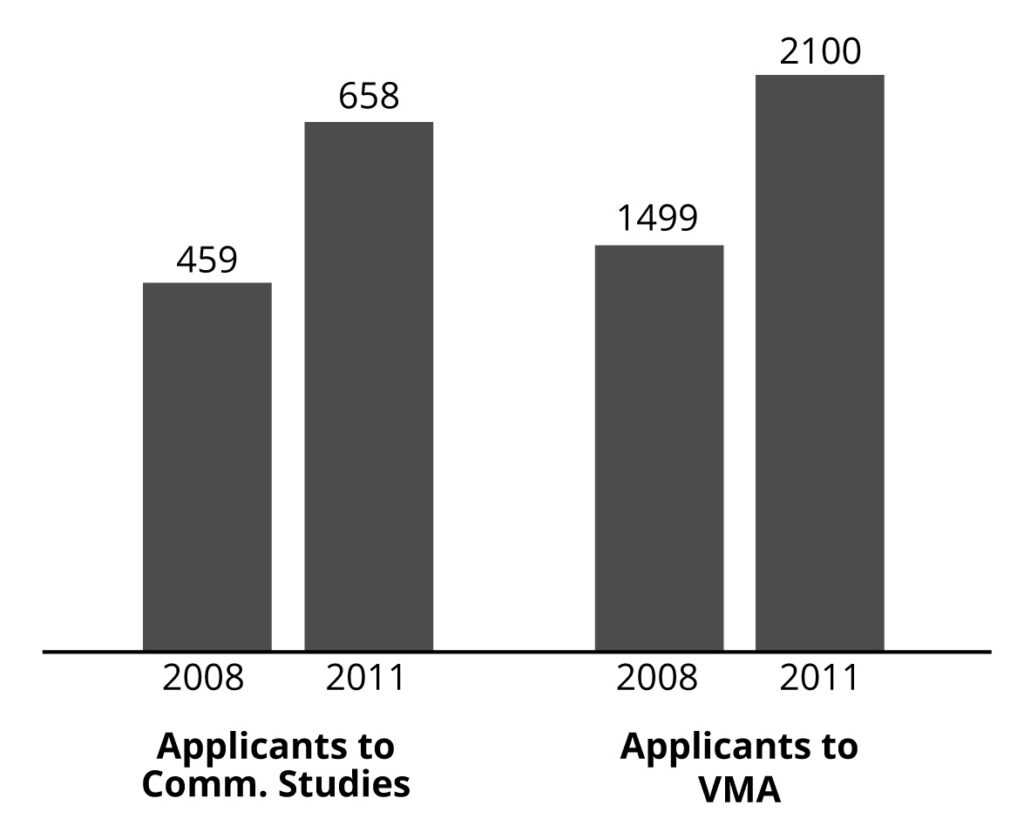 Recent statistics show applications to the communication studies major have increased from 459 to 658 applicants over the past four years, a significant number for a major that typically sees a lower percentage of applicants, according to Vice President of Enrollment MJ Knoll-Finn.

“Rich West and his department deserve a lot of credit,” Knoll-Finn said of the department chair. “[Communication studies] doesn’t have a huge applicant pool, but it has been growing.”

According to Knoll-Finn, the applications for admission are still being reviewed and will not be done until mid-March.

West, in reference to the increase, said that the numbers are a reflection on the success of alumni, professors, and current students.

“The increase in applications is really a testimony to the great work undertaken by our full- and part-time faculty,” said West . “Yet, in the end, I think that we have enormous interest in our program because of the reputation of our past and current students.”

Communication studies is one of two departments to see major increases in the applicant pool. Visual and media arts has had a steadily increasing number of applicants from 1,499 in 2008 to nearly 2,100 this year.

“Visual and media arts has consistently grown in applications over the past four years — and are a power house for attracting applicants to Emerson College,” said Knoll-Finn.

Jonathan Wacks, visual and media arts department chair, said that the major has developed a high quality reputation and that the amount of applications seem to increase significantly each year.

Wacks said he believes the quality of faculty, success of alumni, student resources, and the culture of creativity is what attracts large numbers of students to the program.

According to Wacks, the challenge is how many students the department can accept. The major accepted approximately 300 students last year, but Wacks said that the major was maxed out without depriving students of individual attention.

While a large applicant pool is always ideal, this year the college is looking to accept fewer freshman to create a more selective process, said Knoll-Finn. She said that the statistics are no indication of the projected size of the class of 2016.

Knoll-Finn said the most common and effective way for the applicant pool to grow in size and quality is by word of mouth from current students and alumni.

“The overall quality of our applicants is up,” said Knoll-Finn. “This is great for Emerson because it means we are on the radar with kids who might not have considered us in the past.”

According to Knoll-Finn, the school has seen some ups and downs in applications in the School of Communication over the past few years. Journalism and marketing were up last year but are down this year, and communication disorders has been attracting more students over the past four years, although this year the numbers are relatively flat.

Ted Gup, journalism department chair, said he hasn’t seen the recent numbers, but that the statistics fluctuate year to year. Gup said that one possible reason for the decline in prospective journalism majors is the volatile nature of the media industry right now.

“What I can tell you is that the quality of applicants remains very strong and to some degree, the decline shakes out uncommitted applicants,” said Gup. “The applicants we do get are quite passionate and committed to the field.”

“The departments in the School of Communication have been doing a lot to highlight why a student should choose to attend Emerson. They are looking at curriculum to adjust to changes in their fields,” said  Knoll-Finn. “The more this happens the better it is for the department and the college.  Students apply to places where they already see movement and success – they want to be a part of it and benefit from it.”