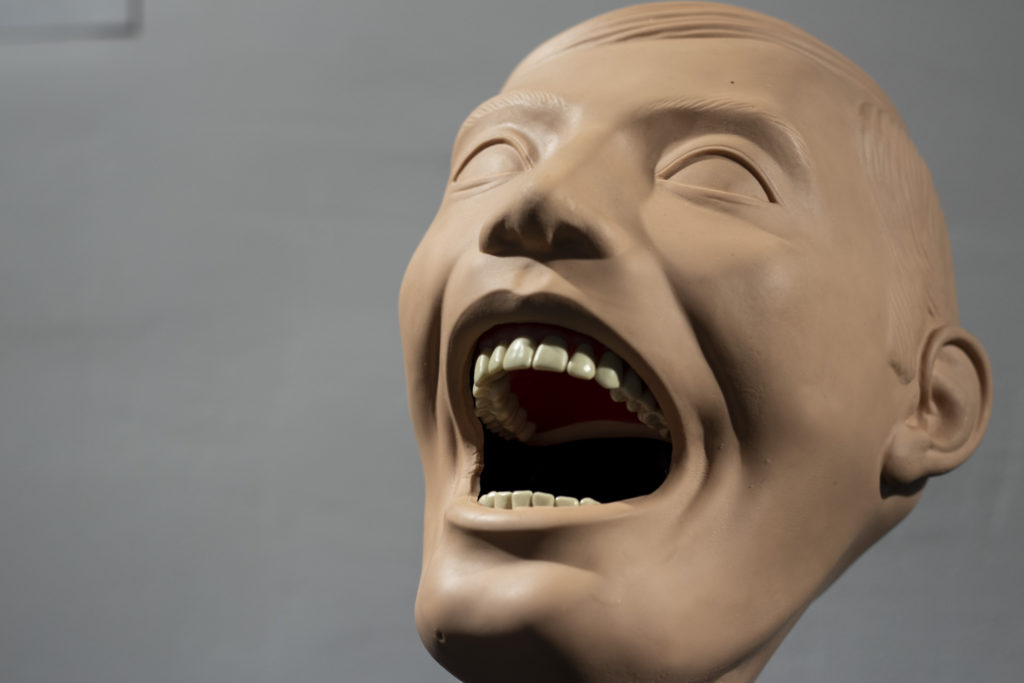 Nonsensical sounds, intriguing oil paintings, and ambiguous misfortunes such as, “Your dreams are worth your best pants when you wish you’d given love a chance,” filled the Emerson Urban Arts Gallery on Feb. 14.

But what surprised visitors entering the gallery is the artist—or artists—behind the pieces.

The new exhibit, “Creative Work as Adversary: The AI and Machine Art,” was created by roboticist and artist Alexander Reben and an artificial intelligence computer. This collaboration between human and machine showcases the connections between the world of artificial intelligence, robotics, and art, according to an exhibit placard.

AI generated the title of the exhibition after memorizing the titles of all the exhibitions at the Museum of Modern Art in New York City. It then output new titles, and the one for this exhibition was chosen by Reben and George Fifield, curator and director of Boston Cyberarts, a nonprofit arts organization which showcases the spectrum of media arts including electronic and digital experimental arts programming.

“A lot of the artists that Boston Cyberarts shows regard code as a creative medium as opposed to paint, or sculpture, or 3D,” Fifield said. “Their art medium is code, and [Reben] is one of those.”

According to The Economist, code is a way of writing instructions for computers that bridges the gap between how humans express themselves and how computers work.

Visitors can quickly see what the collaboration between an artist and AI looks like with the projection of a TED Talk on the wall next to the gallery’s entrance. “Five Dollars Can Save Planet Earth” is presented by a cyborg using a robotic face mask worn by Reben. The computer then speaks through the mask.

This is the world’s first TED Talk written and presented by artificial intelligence.

Reben programmed an AI system to watch every TED Talk and write its own based on what it learned. The computer then created several versions, and Reben chose the one he liked the best. After three minutes of nonsense, the talk ends with, “Sometimes, I think we need to take a seat. Thank you.”

Freshman Cameron Carleton, one of the gallery guides, explained that the exhibit’s artwork sparked confusion and curiosity from visitors.

“It’s funny how conversations go the same way,” Carleton said. “It starts base-low like, ‘How was it made?’ ‘What is it about?’ And then they just start asking about how artificial intelligence is going to take over the world or something. It kind of somehow leads to that conversation no matter who you’re talking to. It’s really a thought-provoking exhibit.”

“I think it’s really interesting because so much of a lot of people’s exposure to AI was through science fiction films in the [1970s] and [1980s] where it is portrayed as being this really scary thing,” Orme said. “So people are afraid of it.”

Fifield is currently acting as a replacement for Joseph D. Ketner II—the founder of the gallery who died last spring—until the college finds an official replacement. Fifield said he chose to curate the exhibit after following Reben’s work for years.

He said AI, and its use of the arts, greatly interests him. In Jan. 2018, he had a show called Artificial Creativity displayed at Cyberarts.

“So I have been studying it, for now, a number of years. [Reben] brings to it a certain, very charming sense of humor and a little bit of creepiness,” Fifield said.

The mysterious and almost surrealist paintings on the walls are called amalGAN oil paintings. They were initially created after an AI program combined different words together to generate a digital image of what it thought these words would look like. The AI then produced variants of these images.

The computer then determined which image Reben liked best by measuring his brain waves and body signals when looking at the images. The artist then sent the chosen image to anonymous painters in China who turned it into the oil painting. Finally, the AI picked a title based on what it saw on the canvas.

The exhibit will run until April 14 in the Urban Arts Gallery, which is open Wednesday through Saturday from 2 to 7 p.m. The next exhibit will be a traditional Master of Fine Arts show displaying the thesis exhibition of graduate Emerson students.

Reben will host a gallery walkthrough on March 3 at 4 p.m. and will give a public lecture, “Human-Machine Collaboration in Art Making,” at the Massachusetts Institute of Technology, where he studied, on March 4 at 5 p.m.

“I find it very funny that we’re terrified of what artificial intelligence is going to do in the future, but once it exists in the present we don’t even think about it,” Fifield said. “So I think [Reben] is sort of playing on that.