Artists create works out of recycleables to raise awareness 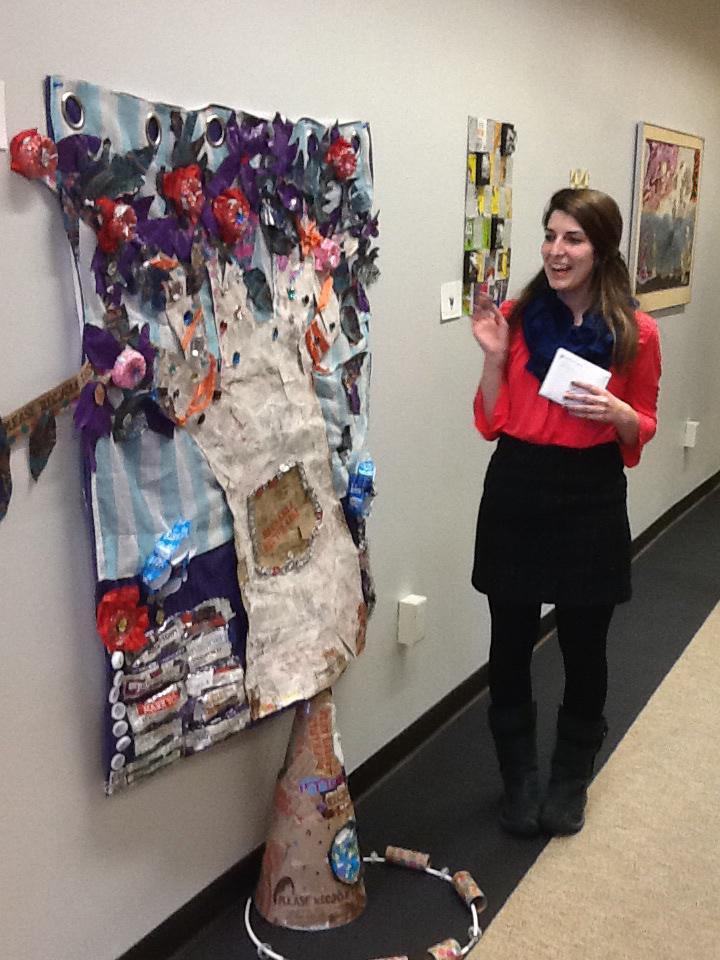 Tim Johnson was flat broke and in the mood to paint when he began a project that would eventually win him a $100 prize. While living in Jamaica Plain for the summer, Johnson said he found inspiration for his piece in a seaside landscape painting that he found on the curb. He obtained paints and other materials from his artist friends and construction sites. Johnson said he assembled images from a book about the life of the American frontier onto a canvas with a homemade glue called wheatpaste, made from wheat, sugar, and flour.

“I made do with as few resources as possible,” said Johnson, a junior journalism major.

With this piece, Johnson ended up winning third place in Emerson’s Recyclemania Art contest on March 28, which aimed to spread awareness about the importance of sustainability through art projects made entirely of recyclable materials. The contest was part of the school’s participation in the nationwide Recyclemania competition, which spans over a period of eight weeks.

“It means a lot to have a piece of art that I made for free on display here competing with other works,” Johnson said. “It’s a real sense of validation.”

“It was designed to encourage people to use their imagination to see materials not as something to be thrown away, but to be used as art,” said Van Vlandren, who is an Emerson alum.

Students were allowed to use any materials that were destined to be recycled, according to Van Vlandren. Art pieces included a wallet made out of tea bags and a tree composed of broken glass, bent nails, and wire.

“As Emerson College, we’re supposed to be progressive, so doing well in the competition would be something that you might expect, but it doesn’t often happen,” said senior Rachel Hill, the co-president of Earth Emerson. “Our campus is lacking in literature about on-campus recycling.”

Van Vlandren said one of his goals for sustainability at Emerson is to initiate single stream recycling, in which students can put all recyclable materials into one bin.

Van Vlandren said he hopes that this change will eliminate confusion among Emerson students, many of whom may have been raised in environments where single-stream recycling had already been implemented. Van Vlandren also said he hopes to place trash receptacles and recycling bins together throughout campus.

“I didn’t know how great of a program Emerson had,” Feeney, a junior journalism major said. “Eric [Van Vlandren] is very dedicated. Because of him, I learned about the recycling club.”

Spreading awareness and educating students about recycling is also important to Earth Emerson, a student-run organization dedicated to improving sustainability within the college, but Hill said it’s not always an easy goal.

“We have Recyclemania every year and it does not always have a lot of traction,” said Hill, a writing, literature, and publishing major. “I’ve personally tabled a few weeks ago and talked to a whole bunch of people outside of the dining hall. People weren’t aware of the campaign, which is surprising to me.”

Feeney said that she believed the competition would help encourage an environmentally friendly atmosphere. She said she created her project, a colorful tree adorned with jewels and bottle caps, from a variety of materials, including an old shower curtain, leftover fabrics, and jewels that her roommate had leftover from making a Princess Peach costume.

“I wanted it to have flowers and spread cheer, because this has been a horrible winter,” Feeny said. “I wanted to think spring.”

Feeney said the Recyclemania competition was another step toward establishing a focus on sustainability on campus.

“I think that visually, Emerson students need something to look at,” Feeney said. “It will generate in their minds that things have been changing.”