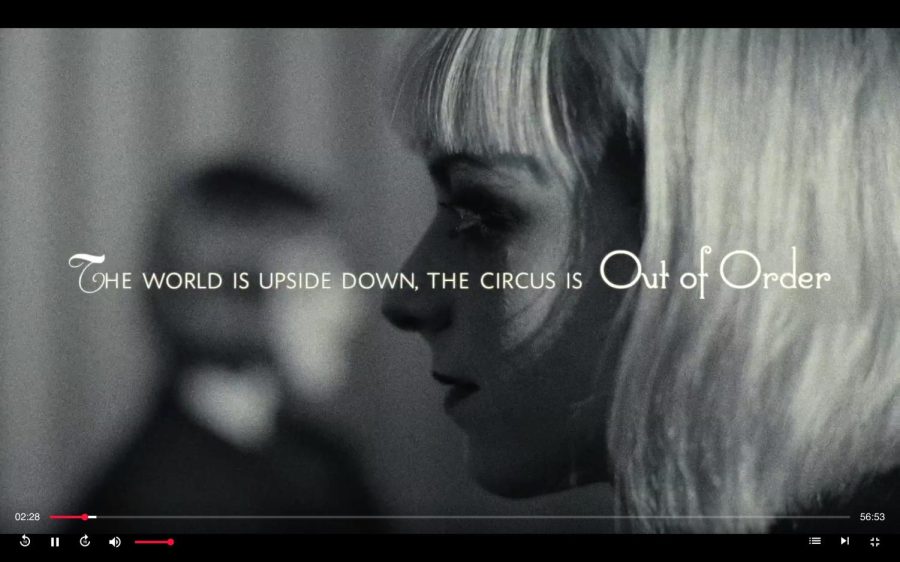 The virtual screening of 'Out of Order.'

ArtsEmerson kicked off their fall season in a whimsical world with a bittersweet twist with The 7 Fingers, a Montreal-based circus troupe.

Founded in 2002, The 7 Fingers combines acrobatics and theatricality through its refreshing take on the traditional circus experience. Lighting ranges from warm tones to vibrant greens and purples, each stage light reflecting off of the glitter actors have painted over their eyelids. The costumes depict each character’s class and the props double as tools used in the routines.

“Out of Order” can be considered The 7 Fingers’ passion project. The theatrical film highlights the struggles that creatives faced in 2020 through its depictions of struggling actors who are desperate to perform.

“We were all very interested in creating our own sort of style and vision for how to use circus as a theatrical and choreographic medium to tell stories,” Gypsy Snider, the director of “Out of Order,” said in an interview with The Beacon. “We were also interested in taking the spectacle out of [the] circus and making it much more about its humanity.”

“‘Out of Order is only semi-fictitious,” Snider continued. “It’s [about] a circus company troupe that is attempting to survive in a world where live theater is no longer allowed, which was quite actually the situation at the time [of filming].”

Jaw-dropping acrobatics and carefully choreographed routines are at the heart of “Out of Order,” but the soul of the show lies within its ability to illustrate how the pandemic is coinciding with our understanding of the effects of the digital world.

“The whole point of live theater is to have that connection with your audience and by putting it into a virtual atmosphere, it takes away that humanity of theater,” first-year theater and performance major Carly Mentis said. “You can’t feel the audience with you… and as an actor, I thrive off of that energy.”

While tangibility is lost with the adaptations of live performances into films, “Out of Order” shows that intimacy stands to be gained. The closeup and detailed shots of every flip, tightrope walk, and acrobat stir a cathartic reaction in viewers. The sweat, the height, and the landings can all be felt through the screen.

By peeling back the curtain and showing the nitty-gritty details, performances become more relatable and audience members become more invested.

“We have the camera, so how can we bring the camera in so that the people watching from home have the visceral experience of touch, of contact, of emotion?” Snider said. “[The performers] are playing to this framework, they’re reaching out and saying ‘we need you, we’re here.’”

With elements like the colorful stage makeup and a soundtrack that seems to be a cross between music from medieval times and today’s indie-pop hits, the quirk of “Out of Order” has the power to transport viewers to a different realm.

Snider attributes the film’s various playful elements to its editor, circus performer, and skateboarder, Francisco Cruz, and how he developed The 7 Fingers’ digital voice.

“‘Out of Order’ and the video work we’ve done in the past has really had that skateboarder influence,” Snider said. “Another inspiration was the film ‘Cabaret.’ What I found so fascinating about that film is there are two different ways of filming: outside of the Cabaret venue and inside the Cabaret venue…so I love how [‘Cabaret’] captured that performance and captured its relationship to the audience.”

Due to mask requirements, the film’s cast was often forced to express their emotions fully through their movements, tricks, and routines. However, the show never loses its effectiveness to communicate the message it was meant to convey with ease.

“7 Fingers shows are so dependent on the relationship with the audience, and I realized we had to recreate that codependent relationship,” Snider said.

With all of the acrobatics and routines viewers see throughout the film, the lack of speech or facial expressions goes unnoticed. Movement, while being more covert than speech, is just as important in the theater world.

“Someone could be the best actor on stage, but if they are stagnant the audience isn’t going to pay attention to them,” Mentis said. “You need to have that dynamic element. [Movement] keeps people engaged.”

An eerie feeling clouds the performance throughout the film. Viewers are constantly aware that something is off—or missing. This feeling is intended to reflect how the cast and crew felt putting on a show for an empty circus big top.

“[The characters] are already a troupe that has no audience…and they feel that they are a forbidden form, and they’re trying to survive using all of their essence of a traditional theater, and performing, and street performing,” Snider said.

Performing without an audience can often leave performers searching for a purpose and missing the fun behind theater.

“When you have those audience reactions, that’s what keeps you going,” Mentis said. “A cough here or a chuckle at a weird spot—that’s what makes [performing] so good. The little inconveniences of live theater are what makes it feel real.”

A tonal shift at the halfway point in the film peels back the joy and artifice of the first half. When the yellow and orange hues of the lights fade to cooler tones, the remainder of the film explores what it was like for performers to be classified as “non-essential” workers in 2020.

“It’s very upsetting knowing that what you live off of and what you thrive in is just labeled ‘non-essential,’” Mentis said. “Theater plays a big part in the existence of storytelling, and it’s essential for people to know those stories.”

Mentis said that without the storytelling that theater provides, the necessary discussions following those stories will never be had.

“If we don’t know these stories, then how are we supposed to grow as humans?” Mentis said.

The performances go from chaotic, playful, and fever dream-esque to real, and raw—showcasing the performers’ need for self-expression, art, and culture.

“Halfway through the film, it’s almost as if [the cast] loses steam…the power fails and it’s no longer about performance as a form, but actually the deep necessity to perform even without the spectacle,” Snider said.

The first half of “Out of Order” taps into the origins and traditions of theater: jesters, aristocracy, and archetypes. But the second half encapsulates the purpose of the performance: to show what it was like to have the plug pulled, and the energy sucked out of a creative outlet. The film highlights the essence of why culture is important in society.