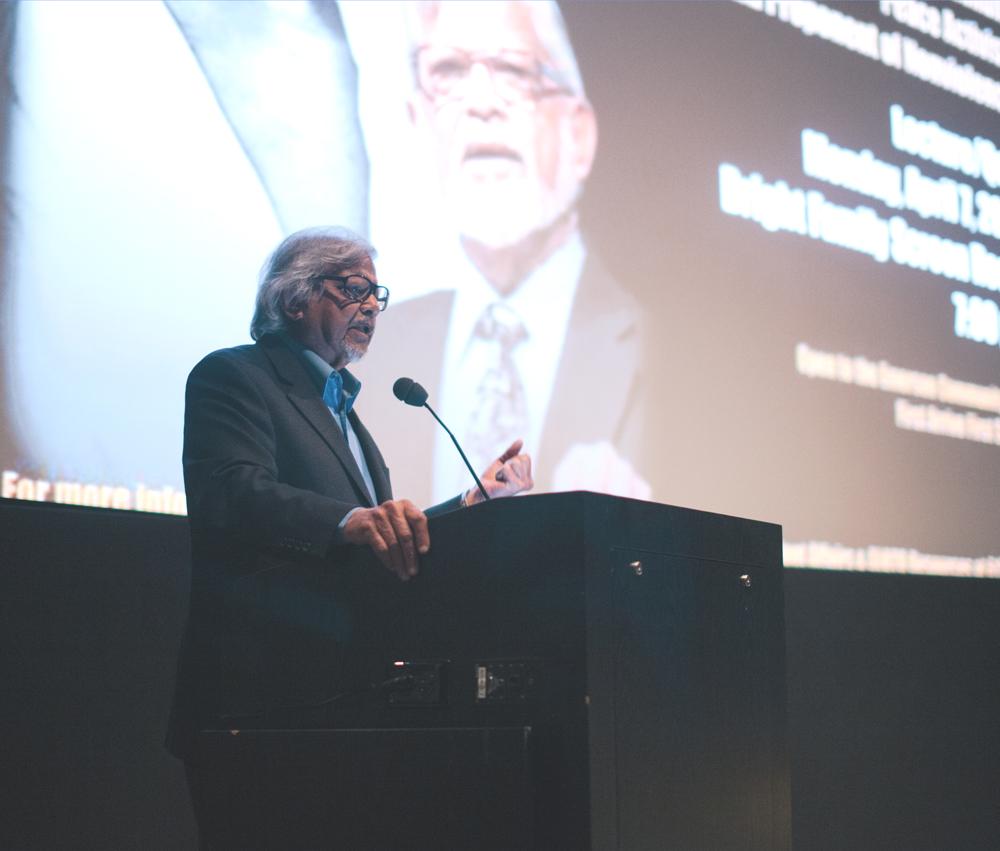 Before Arun Gandhi’s lecture to an audience of over 160 students, faculty, and staff members on Monday, April 7, the world-renowned activist and grandson of Mohandas Gandhi said the act of speaking at colleges and universities around the world was another facet of his job as a “peace farmer.”

“Like a regular farmer goes out into the field, plants seeds, and hopes and prays that he’ll get a good crop,” the 79-year-old South African native said at a press event, “in the same vein I go and plant seeds in the minds of people, and hope and pray the seeds will germinate, and I’ll get a good crop of peacemakers.”

Mohandas Gandhi, commonly known as Mahatma, the leader of the Indian Independence Movement, was a famous proponent of civil disobedience. Arun Gandhi devoted much of his 30-minute lecture to planting the ideological seeds he hoped would help audience members work to reevaluate and ultimately eliminate anger.

“Anger became the foundation of his philosophy,” Gandhi said of his grandfather. “He understood and believed that unless we understand our anger and are able to use that anger constructively or positively, we can never become nonviolent.”

The event was sponsored by the Office of Diversity and Inclusion and Asian Students for Intercultural Awareness, or ASIA, as the second of a series of events to celebrate Asian Pacific American Heritage month.

Danny LeMar, president of ASIA, introduced Arun Gandhi’s history, noting that he grew up under apartheid as a child, and highlighted Gandhi’s previous accomplishments, including his study comparing social inequalities in South Africa, India, and the United States that brought him to the U.S. in 1987.

Gandhi said each country’s system of inequality was rooted in the same inability to foster relationships with others based on anything other than self-interest, and that people have often overlooked aspects of his grandfather’s philosophy of nonviolence, which included passive violence against emotions and nature.

“We need to live as human beings,” said Gandhi in his calm, measured speech. “We need to treat each other as human beings and not divide people by their nationalities, genders, race, or the color of their skin. We have so many labels on people that we have forgotten that behind those labels there is a human being.”

Throughout his speech, Gandhi repeatedly drew parallels between Jesus, leaders like Dr. Martin Luther King Jr., and Mahatma—who he referred to exclusively as “grandfather.” Though each of these men dealt with turmoil in their lifetimes, Arun Gandhi said their ideologies were bound together by more than their similar struggles.

“[They] all came from the same ordinary background that all of us come from. But they had that desire to become a better person, and that is the desire that all of us need to cultivate,” said Gandhi, suggesting students list their weaknesses, and work on tackling one every day.

In the second half of the event, the audience was invited to participate in a half-hour Q-and-A session. Gandhi maintained his place behind the lectern as he answered a total of 19 questions asking about his thoughts on subjects like artistic expression, the Israeli-Palestinian conflict, and the upcoming Indian elections. One student’s personal quip asking Gandhi what he does for fun elicited laughs from the crowd and a chuckle from the speaker.

“Well at 80, what do you do for fun? I go for walks, I go spinning,” he said, pausing to ask if the audience was familiar with spin classes. “I have an instructor who really puts us through the paces… I do a lot of reading and writing, and that’s it.”

“I couldn’t believe or fathom that he was there,” she said after the event. “Being in his presence and hearing what he had to say allowed me to reevaluate some things in my own life.”

For freshman Sadie Stockham, who said she visited Kolkata, India to work with followers of Mother Teresa as part of a high school service trip, hearing Gandhi speak was such a visceral experience that she said she could almost smell the community she visited.

“My experience was about transferring humanity and aid through touch,” said the writing, literature, and publishing major. “His message was more about transferring peace through ideas and words, which was different but interesting.”