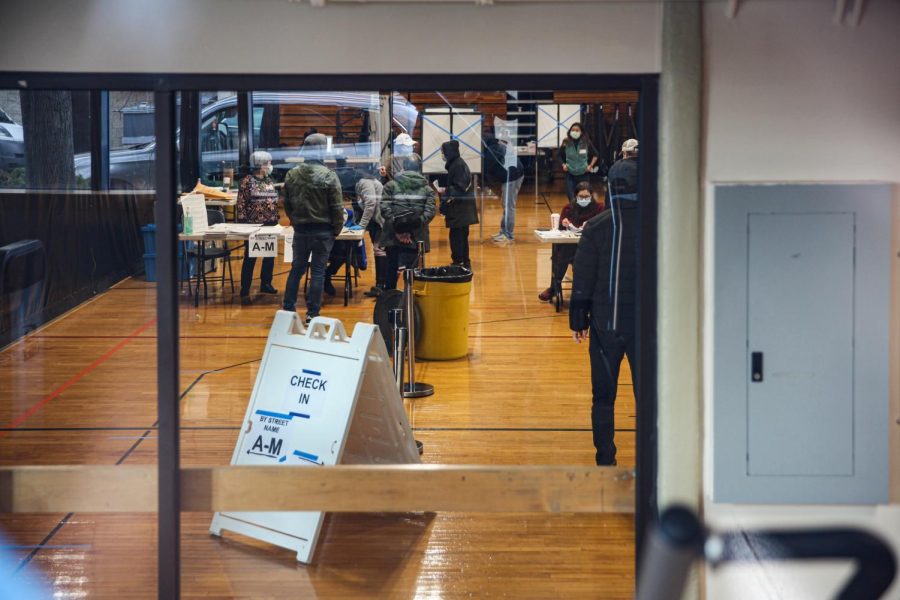 A polling place at the Chinatown YMCA was open on Nov. 3.

Students at Emerson’s Boston campus were apprehensive and anxious Tuesday as the country awaits results from this year’s highly anticipated presidential election.

“It’s been a long time coming,” first-year Ethan Schlesinger said in an interview in the Lion’s Den. “I’ve been waiting for this since the start of 2016.”

Schlesinger, whose mail-in ballot in Wisconsin was processed only yesterday, said he’s not worrying for his own safety in demonstrations that may follow the election results. In 2016, swaths of Emerson students were among thousands who marched through Boston Common to protest the outcome of the historic election.

“I’m worried about the safety for others who don’t have anywhere else to go,” he said. “It’s important that we acknowledge our privilege to be able to be safe on campus and have all these security guards and all these buildings and facilities to attend to.”

Juniors Asa Badalucco and Alex Brown both voted for the first time this morning at City Hall. While Badalucco held up his “I Voted” sticker proudly, the pair said they were worried that Trump would be reelected.

“It was a good experience voting,” Brown said. “It was easy. No one was here.”

First-year Rocky Meng said the election will impact him as an international student, even though he’s unable to cast a ballot.

“I post a lot of stuff on my Instagram stories,” he said. “I tell my friends to vote. I’ve pushed hard enough so they can vote. So I can’t vote, but I raise awareness for people around me.”

First-year Lara Glennon took the commuter rail to her hometown in Rockland, Massachusetts yesterday so that she could cast an in-person ballot today at her old elementary school.

“I just figured that with the amount of uncertainties in the world right now, it would be easier to just make the quick trip home to go do it in person so that I know that it’s done and done right,” she said.

Glennon, who is a first-time voter, said the polling place was not crowded and had hand sanitizer at the door. Each voting station was disinfected between voters. She said she was the only one of her friends on campus to not vote by mail.

“I do think that it is a good choice to not be in the city and not have to worry about what will be going on tonight and tomorrow,” she said. “But it does seem strange that you know all my friends are together and going through this with each other and I’m here with my family, separated from the rest of the Emerson community.”

Glennon, who voted for Biden, doesn’t know when she will be returning to the downtown Boston campus. She said since classes moved online tomorrow, she plans to stay at home tonight and then reevaluate the situation.

“No matter what happens, there’s for sure going to be a shift in the atmosphere on campus in the next couple days,” she said.

Reagan Finch, a first-year student from Florida, said after delays receiving her absentee ballot, she finally cast a vote for Biden in her highly conservative town.

“If people our age are starting to vote more blue, it’s going to make a change, but it’s still kind of that impending doom,” she said. “You see stuff back home, people are having Trump rallies today, at my old school, so it’s just kind of sad. But at the same time you really hope you’re making a change.”

First-year Sofia Cardona said she is worried about the country’s reaction to the outcome of the election.

“I personally feel really anxious about it just because of how the people of our country are going to react to it,” she said. “I’m from the South in North Carolina, so there are a lot of things happening over there and my parents told me that they’re boarding up all businesses and closing early.”

Cardona said her main concern is the impact the electoral college will have on the election’s outcome. Some disagree with the Electoral College system, as electoral votes can override the popular vote.

“The electoral college is the biggest flaw right now and I feel like it’s super outdated and it only favors one kind of person which is the white, rich, one percent male,” she said.

Sophomore Brynn O’Connor said that the atmosphere in Boston has shifted over the last couple of days.

“Everything is so weird,” O’Connor said. “CVS is all boarded up. Everyone is just walking around and keeping their heads down. It’s weird—everything is really scary right now.”

Beyond feelings of personal concern, some students worried for the institutional issues that may influence the election.

“I just saw this post about the lines for voting, and it’s voter suppression,” O’Connor said. “I have friends back at home and they’ve been waiting in the freezing cold since 5 a.m. I also think that’s a form of suppression, the lines should not be that long. That’s the reason people don’t want to vote, like, ‘I’m not waiting at the crack of dawn in the freezing cold.’ There’s got to be a better system. If you need to vote in person, today is your only day. Especially with COVID-19, no one wants to stand close to each other.”

Changes on campus in preparation for potential civil unrest evoked uneasiness among other students.

Other students reported feelings of pride in young voters for engaging in the political process, whether it be on social media or through activism. Sophomore Lilly Meehan-Egan said she was pleased with how many students took advantage of early voting this year.

“I’m actually feeling really calm today, more so than I thought I would,” Meehan-Egan said. “I’m a political communications major, and I’ve been analyzing this election for months in a class, and I thought I’d have a lot more anxiety about it than I do, but I feel really calm.”

Ben Bernard, a sophmore, said he feels as if he has done his civic duty leading up to Election Day.

“I’m supporting Joe — you’ve got to hope for the best,” he said. “I’m not looking at the news today. I’m waiting until tomorrow because it’s unlikely we’re going to get confident results today because of a number of factors. I’ve donated, I’ve volunteered. I feel like I’ve done a lot personally.”

Mackenzie Mooney, a first-year student, said she is nervous about how close the election results might be. According to the latest battleground polls conducted by Emerson Polling, Biden is pulling ahead by significant margins in Wisconsin, Michigan, and Pennsylvania, and minor leads in Arizona and Ohio, though Emerson polls in 2016 predicted former Democratic nominee Hillary Clinton would defeat Donald Trump.

“I’m a little worried and nervous,” she said. “I feel like there are so many young voices these days and so many of them are speaking up now. I feel like it’s definitely going to be very close either way.”

First-year journalism student Sydney Cohen said she was finally confronted with the reality that Election Day has arrived this morning.

“I feel really brought to reality, and I feel like I’ve been pushing this day away for such a long time and now that we’re here it’s kind of fight or flight mode,” she said.

Cohen, who is originally from New York City, said  being part of the Emerson community, where students share her political views, is comforting.

“I’m really happy to be with the same people who envision the world the same as I do,” she said. “I really enjoy seeing that [students] are taking such initiative to make sure that kids are going out there and voting and are engaged.”

Cohen said she plans to watch the returns roll in with some friends tonight in her dorm. She said she is feeling apprehensive about the potential of protests on Boston Common after the results are announced.

“I’m very nervous to see what happens, I feel as if either way there will be protests and outbreaks and I wish I had optimism, but it’s really hard at this time. All I can say is that I would hope everyone votes and take it from there.”