As vaccine rollout trudges along, the Emerson community gets in line 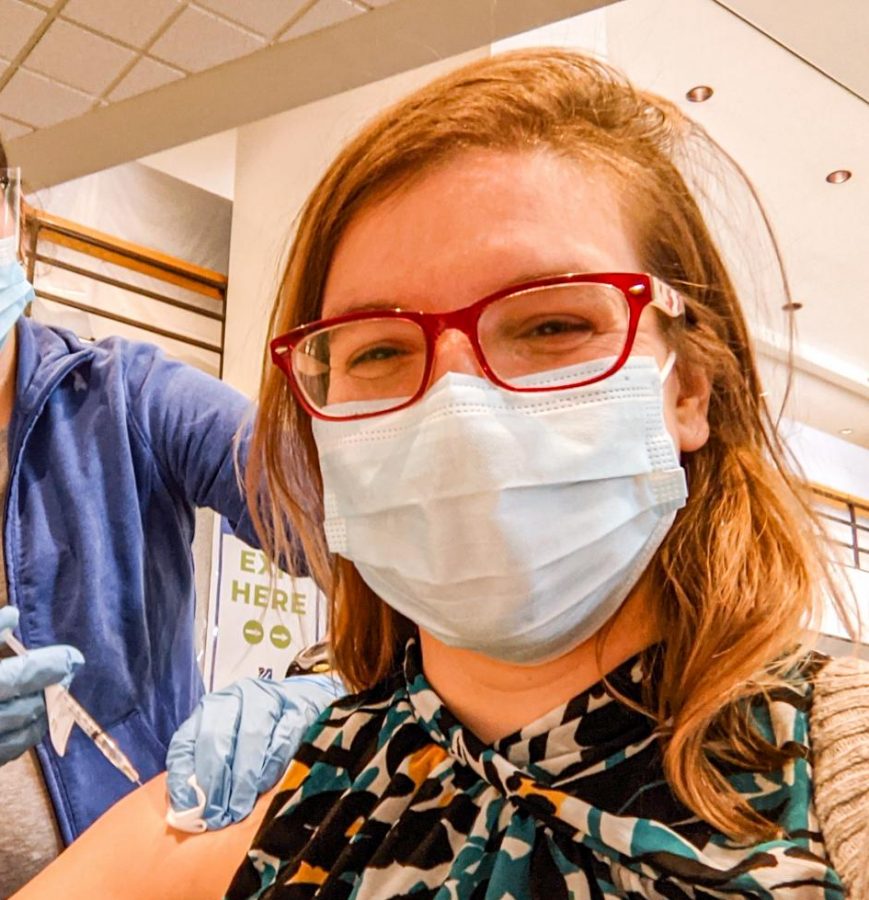 As the COVID-19 vaccine rollout continues to plod along in the state and nation, some members of the Emerson community have gotten one or both of the doses of the two authorized U.S. vaccines, marking the beginning of the end of a pandemic that has upended nearly every aspect of college life.

Most states’ vaccines are still limited to health care workers, adults over a certain age, or certain essential workers. However, some members of the Emerson community, by virtue of their jobs, locations, or loopholes, have been able to receive the life-saving dosages.

Emerson College Police Department officers and Center for Health and Wellness staff received COVID-19 vaccines as part of Phase One of the Massachusetts Vaccination plan. The rest of the general Emerson community is planned to follow in Phase Three, which is expected to occur between April and June.

Status of vaccine distribution varies state by state. In Massachusetts, which is currently in Phase Two of its three-phase plan, residents over the age of 75 are eligible to book appointments to get vaccinated, following the inoculation of health care workers, employees in long-term care facilities, and first responders.

In their vaccination report card released Feb. 9, The Belfer Center for Science and International Affairs at the Harvard Kennedy School gave Massachusetts an F grade in vaccinations per capita and vaccinations as percent of doses available, making the state 42nd and 44th in the nation, respectively.

For health care workers, the vaccine is the signal of the light at the end of the tunnel after nearly a year of strained resources and heightened precautions. Jesse Battilana, a nurse practitioner who works at the Center for Health and Wellness, received the vaccine in Phase One at the UMass Memorial Medical Center in Worcester, where she worked before coming to Emerson in January.

“I showed up a couple minutes before my appointment,” she said. “I went through a series of screening questions with the nurse that administered it, and then waited for 15 minutes afterwards, just so they could monitor and make sure there weren’t any adverse effects.”

She received the first dose of the Pfizer-BioNTech vaccine in a 15-minute appointment in January, and the second dose on Feb. 5.

“I could not stop smiling the entire day,” Battilana said. “Not having to worry quite so much that every wrong move might kill someone’s grandmother is a huge weight off my shoulders.”

The vaccinations in Phase Three will be distributed in line with “Massachusetts protocols, order of priority, and as its supplies allow,” according to a Jan. 11 announcement from the college. These shots will be administered by Tufts Medical Center, the same institution that coordinated Emerson’s COVID-19 testing.

Erik Muurisepp, assistant vice president for campus life and “COVID Lead,” said the college has not determined if the vaccine will be required in order to return to campus in the fall. He said individuals should not wait to receive the vaccine through the college if they can get it quicker elsewhere.

Though vaccines in the state are currently limited to those 75 and older, one 68-year-old Emerson professor, who requested to remain anonymous, received the first dose of vaccine on Feb. 6. He has a blood disorder, and his wife, who also received the vaccine, has a comorbidity—an underlying health condition that might make one more vulnerable to infection—as well.

They both got the vaccine at CareWell Urgent Care in Cambridge, a location he heard about from a friend, and they were both honest about their ages when they gave the clinic their information over the phone. The hour-and-a-half process, which he called “a totally seamless operation,” scheduled them for their second dose. Though he said he felt guilty about “cutting the line,” he added that it was a “relief to get it over with.”

“It’s like the Wild West; there are no rules,” he said. “There’s only advice.”

According to data from the Centers for Disease Control and Prevention, as of Feb. 10, over 44 million vaccines had been administered through the U.S., about 13.5 percent of the nation’s population.

Megan Rose Gavia, a senior visual and media arts major currently taking a gap year, took a job on Long Island, New York, as a diagnostic support associate at the Northwell Health Imaging at the Center for Advanced Medicine. She was eligible to receive the first dose of the Pfizer vaccine in the first week of January after the company sent every employee a text message with a link to submit her information.

“I immediately jumped to it,” Gavia said. “I’m not screwing around.”

The hospitals near her were booked, so she traveled to a location thirty minutes away. She took a five-mile run the day after her first dose, but she said she struggled with worse side effects after her second dose 21 days later. She had chills, a low-grade fever, sore muscles, and a headache, all common side effects, according to the CDC.

“The fact that I was getting this reaction from [the COVID vaccine] makes me scared of what would have actually happened if I got the actual strain of COVID,” Gavia said.

A study released Feb. 9 from the CDC said less than half of U.S. adults say they are “absolutely certain or very likely” to receive the vaccination, reflecting a hesitancy that may be exacerbated by the spread of inaccurate information about the vaccine. Despite misinformation she saw abounding on social media regarding the dangers of the vaccine, Gavia said she was eager to get the shots.

“The first time I got my dose was really like, ‘Just put it in me, bro,’” she said. “But then the second one was fun. They were playing music and stuff.”

Tina Jiang, a senior marketing communications major, received the first dose of the vaccine in Shenzhen, China, on Dec. 29. She was able to register online (after uploading her ID, Visa, and student ID information onto the platform) to get the vaccine at a center about 20 minutes away. The line was long, and she said she waited for over an hour.

“I didn’t feel anything uncomfortable, as normal as taking [the] flu shot,” Jiang said in a written statement to The Beacon.

Battilana, the nurse practitioner, said she hasn’t seen her family in over a year due to her constant exposure to the virus. She contracted COVID-19 in December, waiting nearly a month after she was eligible for the vaccine because of the post-infection immunity.

“It felt monumental because we’ve all been waiting for it for so long, but it hurt less than the flu shot when I got it,” Battilana said. “I want to make sure that people know that just because the process was expedited doesn’t mean that any corners were cut in safety and testing. This is very safe—I was scrambling to get it.”