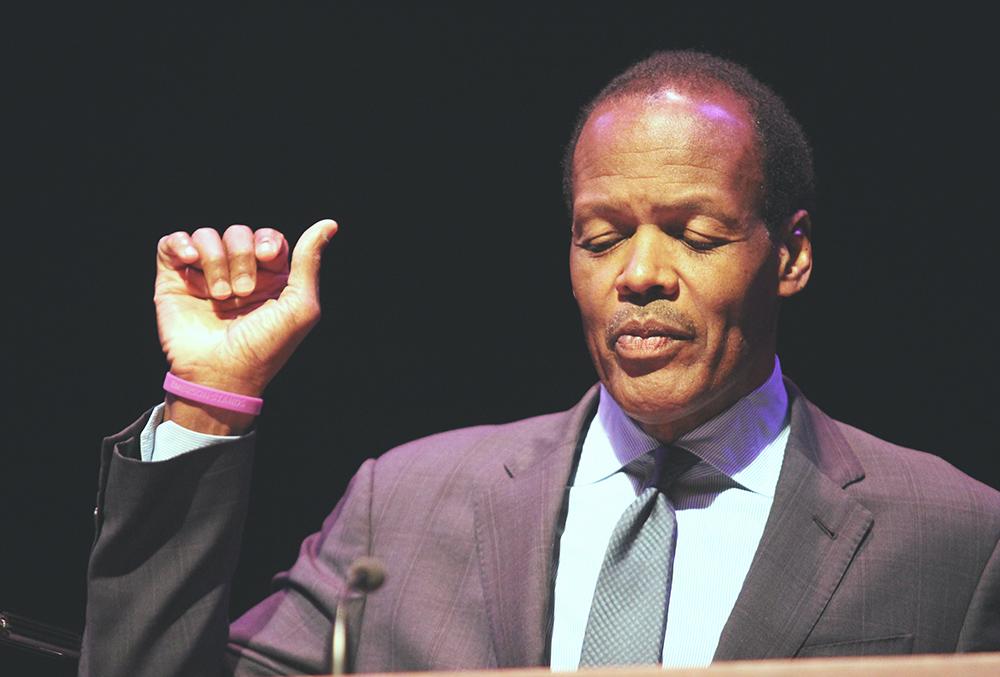 On Monday afternoon, the Cutler Majestic Theatre’s ground floor section was nearly filled to its 300-seat capacity as students, faculty, and staff sat before the purple-lit stage.

The event congregated 275 members of the college community for a town hall-style meeting in response to allegations made by group of students who say Emerson mishandled their reports of sexual assault. These students say they’ve filed a Title IX complaint against the college with the Department of Education’s Office of Civil Rights, drawing attention from local and national media.

“I’m not here today to talk to you about specific allegations of sexual assault on our campus,” said President M. Lee Pelton. “But rather, I am here to tell you why this issue is so important to who we are and what we stand for.”

He said he will authorize — pending approval by the Board of Trustees — a comprehensive, external review of Emerson’s compliance with Title IX, a federal law prohibiting discrimination on the basis of gender in educational programs.

Professors and students alike stepped up to the two available microphones and expressed that the college should dismantle the notion that sexual assault is only a women’s issue, called for more available counselors at the Center of Psychological and Counseling Services, and discussed what students can do to support their peers who are involved in cases of sexual assault.

Monica de Pinto Ribeiro Hancke was the first student to address the panel of administrators. A few words into her question, she apologized for the trembling in her voice.

“This is clearly something very important to me,” she said, overwhelmed with emotion. “What training will faculty, other members of our administration, and students have in addressing victim-blaming?” asked the senior political communication and performing arts double major. “Because I witness it from peer-to-peer and that is very hard to deal with.”

Way answered her question and said that because there are misconceptions about survivors of sexual violence, like thinking the victims set themselves up for assault, it is difficult to respond in a caring way.

Way said she and Spears will lead a task force of faculty, staff, students, and alumni to conduct an internal review, and determine how to improve, Emerson’s sexual assault prevention education, training practices, and efforts to create a culture of consent. A website will be launched to track its progress, she said.

Pelton said the college is now searching for a Sexual Assault Advocate, who will support survivors as they navigate medical, legal, and disciplinary protocols and oversee advocacy groups, among other duties. The job description has been developed and posted on Emerson’s website, he said.

Mick Jacobs, a junior journalism major, asked how students should react if they feel conflicted in situations that involve allegations of sexual assault within a friend group.

Ludman said that the Dean’s Office and staff from the Office of Housing and Residence Life, like resident assistants, are available to guide students in such situations.

Jackson contributed only a few words during the hour-long meeting.

Harrison spoke about the emotional effects of sexual assault, and the resources that the college offers to students who need to cope with that experience, like access to therapists and counselors.

Suzi Pietroluongo, a performing arts major, spoke during the event, and said it is difficult to schedule a meeting with staff from counseling services because there aren’t enough counselors to adequately service the demand.

Harrison agreed with the senior performing arts major, and Ludman said he expects the external review to assess how Emerson can better support the needs of students.

Carole Simpson, a journalism professor who attended the event, asked how Emerson can get men in the community involved in the conversations surrounding sexual assault.

“Why is it that the focus is always in the women, and there is nothing about what men should not do?” said Simpson, receiving applause from the audience. “Men are not told, ‘Don’t rape,’ and women are told, ‘Do not get raped.’”

Pelton and Spears responded by pointing to man-led movements against sexual violence at other colleges, which ally with women victims of sexual assault.

“I would challenge the men on our campus to think about what is Emerson version of that men’s movement,” said Spears.

Spears also said she expects the educational materials the task force puts forth to address that men are also victims of sexual violence.

Pelton closed the panel by displaying a new purple bracelet he was wearing, which says “Emerson Stands.” The bands, which he said reflect a pledge to the community’s commitment in the issue of sexual violence, were distributed for free at the end of the event.

“We stand together knowing that we can and must do better,” said Pelton, “because so very, very much is at stake.”