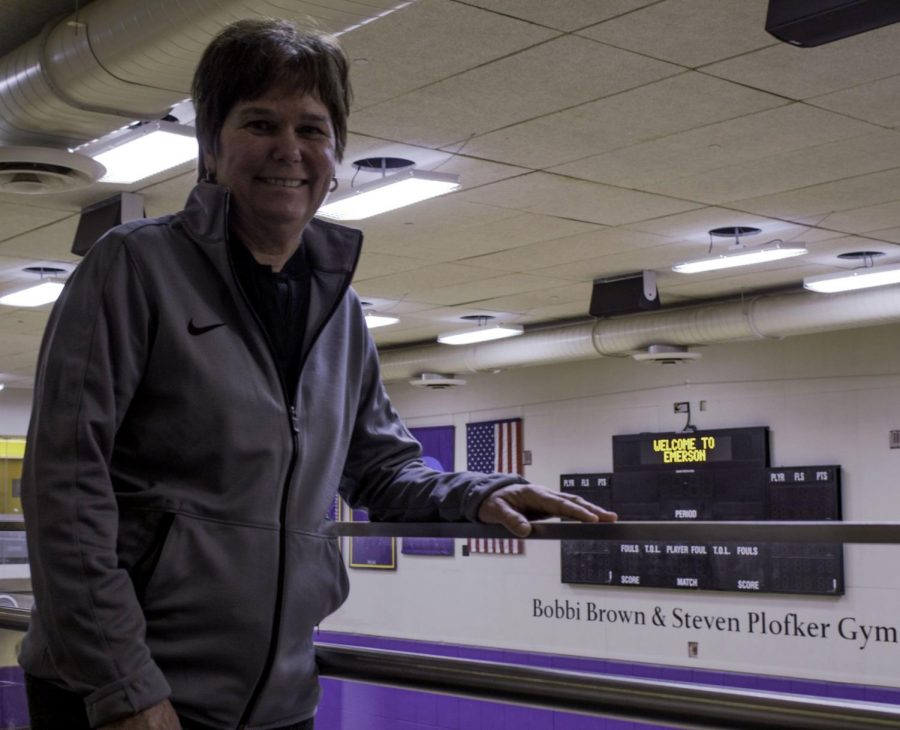 When Patricia Nicol took over as Emerson’s Athletic Director in 2014, she faced the challenge of enhancing the school’s athletic program.

During Nicol’s tenure, the men’s basketball team won the college’s first New England Women’s and Men’s Athletic Conference Championship in 2019. The women’s volleyball team also appeared in the NEWMAC championship game for the first time in 2019.

“The most rewarding aspect of the job is to see the change in culture and belief in our staff, coaches, and student-athletes,” Nicol said in an interview. “We now are in a position where we believe we can be successful, we are competitive, and we have found our place in the NEWMAC conference.”

Nicol said her goal since her first day at Emerson is to provide an understanding of how a successful athletic program can contribute to the mission of the college.

“[An athletic program] contributes to the diversity objective of the college,” Nicol said. “It presents a different opportunity to offer and provide a collegial campus spirit.”

Emerson’s athletic department did not have an official logo until Nicol unveiled the current one in 2014. Nicol also developed a partnership with the Communication Studies Department to establish a sports communication major.

“Pat brings strong leadership and the ability to communicate with people at the upper level of Emerson College and to increase the visibility of success at the Emerson Athletic Department,” David Suvak, head coach of the women’s soccer team, said in an interview.

Nicol worked at multiple Division I and II colleges before taking the Athletic Director job at Emerson. During her collegiate career at the University of Rhode Island, Nicol won seven New England Indoor and Outdoor Track championships in the 800-meter race and qualified for the national championship five times.

In 1990, the University of Rhode Island inducted Nicol into their Hall of Fame in her first year of eligibility, and in 2013 she received the University’s Distinguished Achievement Award from the Rhode Island House of Representatives and the Commissioner of Higher Education.

From 1984–85, Nicol served as the head coach of West Virginia University’s cross country and track and field teams. Nicol said this experience helped prepare her for an administrative role.

“It was interesting because it kind of rounded out my understanding of athletics,” Nicol said. “As a student-athlete, and then as a coach and moving into the administrative role, I had a pretty broad-based experience in what I felt coaches and student-athletes needed in order to be successful.”

After coaching for two years, Nicol moved back to New England to be closer to her family. She worked from 1985–90 in the Groton Public School System in Connecticut as a physical education teacher.

Nicol reentered the world of college athletics in 1990 as the Associate Athletic Director at Providence College, a Division I school. She said her experiences at Rhode Island and West Virginia helped her advance her career.

“When you’re in athletics, you really get to network and develop relationships,” Nicol said. “Through my running, I was able to establish some wonderful relationships.”

Providence hired Nicol to jumpstart their brand new NCAA compliance program despite her lack of previous experience in the area.

“I kind of came in at the ground floor and really studied,” Nicol said. “I visited several institutions and sat in their compliance programs. I really had to do my due diligence over the first couple of years to really understand the nature of that position.”

Emerson hired Nicol in 2014 as their Director of Intercollegiate Athletics and Recreation. Nicol said she believes in a balance between athletics and academics and that Division III creates that environment. Nicol’s daughter introduced her to the philosophy of Division III sports when she played lacrosse at Springfield College.

“My daughter was in the Physician Assistant program, which has a very challenging academic curriculum, but she was also the captain of the Lacrosse team, so she got to experience both,” Nicol said. “After watching her for five years in the program, you really can have both, and I started to reevaluate my philosophy.”

Over her time in athletic administration, Nicol said the methods of recruiting student-athletes have shifted. Instead of waiting for them to express interest in Emerson, they are recruiting students who fit Emerson’s academic environment.

“We are recruiting athletes who are going to be academically successful and are able to bring us to the next level athletically, so we proactively recruit students to Emerson,” Nicol said.

Nicol said the women’s basketball team, women’s soccer team, and softball team all have the highest grade point average in all of Division III over the past three years.

“Pat has really brought stability to the department and a real sense of professionalism,” women’s basketball head coach Bill Gould said. “She has coaching experience, so she understands what the job entails.”

When she arrived in 2014, Nicol said she told the athletic department staff it will take a minimum of three to five years to see the effects of the effort they put in. Since then, Nicol converted the head coaching jobs of all sports outside of cross country into full-time positions. She did not hire a full-time cross country coach because of the absence of a track and field program. She also hired a full-time athletic trainer for the department.

“We have an excellent and committed athletic staff, coaches, and administration staff,” Nicol said. “We are all on the same page on where we want to go. We are going to build a solid foundation, and that always takes time, but when we get to a level, we will be sustaining excellence as opposed to chasing it.”

While Nicol might have held higher-profile positions in the past, she considers her time at Emerson special.

“I am so fortunate to have the experience of maybe ending my career at the Division III level,” said Nicol.