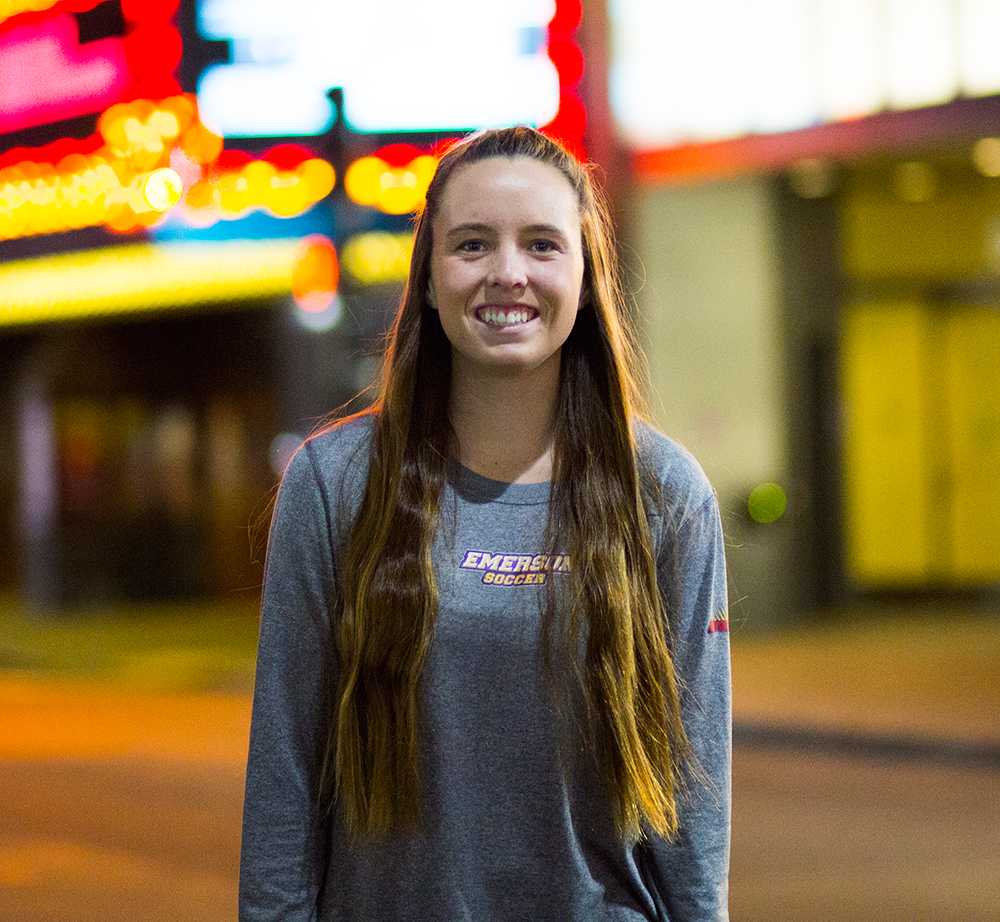 Emerson coaches travel from coast to coast and tournament to tournament in search of the talent that will comprise their next recruiting class. But it’s not just athletic talent they’re after.

Given the school’s focus on communication and the arts, and its academic standards for admission, it isn’t as easy as a coach walking into a gym and falling in love with star players. The pieces of the puzzle—from city living to specialized studying—have to fit.

With all but three programs (tennis, cross country, and baseball) currently staffed with full-time coaches, recruiting is a major focus year-round. The process can begin with an e-mail from a high schoolstudentlooking seriously at Emerson, or in the reverse, with a member of the staff reaching out to someone they think might fit well on campus, according to coaches.

Head men’s basketball coach Bill Curley said he believes the college has been more attractive since joining the New England Women’s and Men’s Athletic Conference in 2013. While Curley acknowledged that his team hasn’t performed as well as some NEWMAC opponents, he said the opportunity to be part of a developing program in a strong league is a selling point.

Many students considering a Division III school for sports are looking first and foremost at the academic offerings, and that makes the relationship between the different branches of the institution vital to recruiting success. Head men’s and women’s volleyball coach Ben Read said the admissions office can often give an “early read” to coaches, letting them know the likelihood of a student’s acceptance based on their GPA, test scores, and other available information.

Because Emerson does not offer athletic scholarships as a Division III program, head women’s soccer coach David Suvak said the financial aid office also works closely with students that he recruits. Suvak said the relationship between the athletic and academic arms of the college has been improved over the past few seasons.

“That collaboration—of me identifying quality players and students and them gaining admission into the college, and having the right package for those families—was very good last year for me,” Suvak said.

Read said professors have increasingly been a boon to the recruiting efforts as well, frequently taking the time to speak to students touring the campus before or after they sit in on a class. He said some educators and admissions staffers have even offered personalized tours of on-campus facilities.

Because of the school’s focus on education, head softball coach Phil McElroy said he “recruits backwards,” first identifying students’ interests, and then advancing to view their on-field play. McElroy, who began his tenure at Emerson in 2000, said the college’s improved facilities have helped convince students who seem suited for Emerson to join his team.

The college secured the right to play home games at Rotch Playground and Field in 2005, while the Bobbi Brown and Steven Plofker Gymnasium opened a year later in 2006.

Athletes Drawn to Study and Play

As a Division III school, Emerson doesn’t exactly jump off the page to prospective college athletes looking for scholarships or national glory. But many athletes said they are drawn to the school by what they consider a Division I set of academic programs.

Freshman marketing communication major Fara Cohen, who finished the women’s volleyball season third on her team in kills, said she contacted Read after coming across Emerson in her college research. She said the school is an ideal landing spot for someone with a desire to compete on the court, but also a desire to put academics at the forefront of their undergraduate years.

“I was looking for that harmony, for a place that I could really live out my passion, play volleyball, but still be training for my career path,” Cohen said.

Cohen said freshmen from the various athletic programs at Emerson typically lead current recruits across campus on official visits. The prospective Lions are invited to stay overnight. Cohen said current players then bring them to a class that showcases their major, invite them to sit in on a practice or game if the team is in season, and take them to campus facilities like the dining hall.

While the official visits are common, not every recruit can fit the trip into their schedule, according to freshman soccer player Paige Haley. Coaches said their ability to travel across the country to speak to players and get a first-hand look at their performance can also be a key in bringing strong athletes to the college.

This fall, the women’s soccer team boosted their offense significantly thanks to the efforts of freshmen Jess Frost, a communication sciences and disorders major, and Haley, a visual and media arts major. Haley finished second during the team’s regular season in goals, with 10, while Frost finished fourth, with eight.

Frost said a subtle measure by Suvak when he was on a scouting trip to Las Vegas made a big difference in her college search. She said Suvak sent a handwritten note down to the sidelines, addressed to Frost, for her to open after the game. Frost, who also explored other colleges, especially in her home state of California, said the coach’s unique gesture led her family to take a much deeper look at Emerson than they had previously.

“My mom immediately took [the note] and looked up the school, and saw that they had communication [sciences and] disorders as a major, which wasn’t even on my radar to major in,” Frost, who originally wanted to teach elementary school, said. “I went on Emerson’s website and watched all their videos about it, and it looked really cool.”

The experience and commitment of Emerson’s coaching staff is another draw, according to freshman Will Lantier, a men’s basketball player. Lantier said he was unaware of the college before Curley reached out to him, but ended up attending because of the head coach’s presence.

Curley played for five teams across seven seasons in the NBA, and was a first-round draft choice of the San Antonio Spurs in 1994.

“I felt like I could learn a lot from him, just because he knew the game so well and he was a professional,” Lantier, a marketing communication major, said. “So far, it feels like I’m learning a new sport just because he’s taught me so much stuff.”

Lantier said that while many recruits may think of Emerson only as a performing arts school, those who visit recognize there are plenty of other avenues to pursue.

“I got used to it quickly, and I really do like it here,” Lantier said. “It’s a good school, you’ll get a great education, the location is great, and we have so much more than just [the arts].”