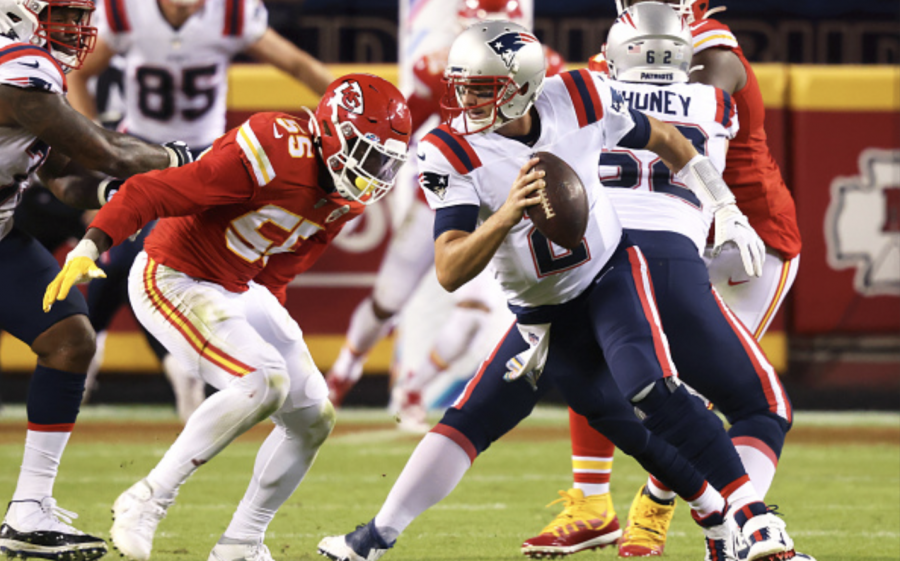 Have you ever experienced when something goes the exact opposite way than you thought it would go? For example, that one test you thought wouldn’t have multiple choice questions actually does, or that one night you go to order your favorite shake at McDonald’s and the cashier shatters your soul by telling you the shake machine is broken again? The New England Patriots certainly experienced that on Monday night against the defending Super Bowl champion Kansas City Chiefs.

Despite the postponement of the game by one day following starting quarterback Cam Newton’s positive COVID-19 test result on Saturday, New England, yet again, lost a winnable game 26-10 and fell to 2-2 overall this season.

The Patriots had an uncharacteristic 4 turnovers on the night which led to 14 points for the Chiefs—just downright pathetic football by New England.

“It was disappointing,” said Patriots head coach Bill Belichick in the postgame press conference. “We had some opportunities tonight, and we were not able to take advantage of them.”

Disappointing and then some, Bill.

With Newton sidelined, New England turned to veteran backup quarterback Brian Hoyer, who I thought would play a steady game since he understands the Patriots’ system well. Spoiler alert: he didn’t.

Hoyer’s night looked like this: 15 of 24 passes completed for 130 yards, zero touchdowns, two disgusting turnovers—an interception early in the game and a fumble in the red zone, and an overall F- on the report card in composure and time management.

“I look at it as I cost us at least six points,” said Hoyer in the postgame press conference. “I’ve got to do a better job there.”

It was such a bad performance that Belichick benched Hoyer for young third-stringer Jarrett Stidham. Though Stidham threw a beautifully lobbed touchdown pass to N’Keal Harry in the fourth quarter to cut the Chiefs’ lead to 13-10, he also threw two interceptions, including one—though not his fault as Julian Edelman bobbled it in the air—which was returned for a touchdown.

Although the Patriots mustered up 185 total rushing yards largely in part to second-year running back Damien Harris’ leading the way with 100 yards on just 17 carries, the passing game destroyed New England throughout the entire game. They had so many chances to keep up with Kansas City, but New England kept coughing up the ball on offense.

Shifting to New England’s defensive performance, they gave it their all with trying to keep the game from going out of hand. The defense didn’t allow a touchdown in the first half and kept the score and stayed down 6-3 for as long as they could. Along with that, they held Kansas City superstar quarterback and bazooka cannon for a right arm Patrick Mahomes to just 236 passing yards, instead of letting him go off for his usual 300-plus yards.

But when your offense is tossing turnovers all over the place like the people throwing the fish everywhere at the fish market, you’re just on your own vs a uber-talented Kansas City offense that will find a way to score eventually.

A lot of good things could’ve happened to the Patriots last night. Instead, the game was like Matthew McConaughey in Interstellar when he explained Murphy’s Law to his daughter: whatever could’ve gone wrong for New England was not even in the same stratosphere as what actually went wrong for the team. Fans can only hope the Patriots correct those wrongs by the time they play the Denver Broncos on Sunday afternoon at home in Foxboro, Massachusetts.