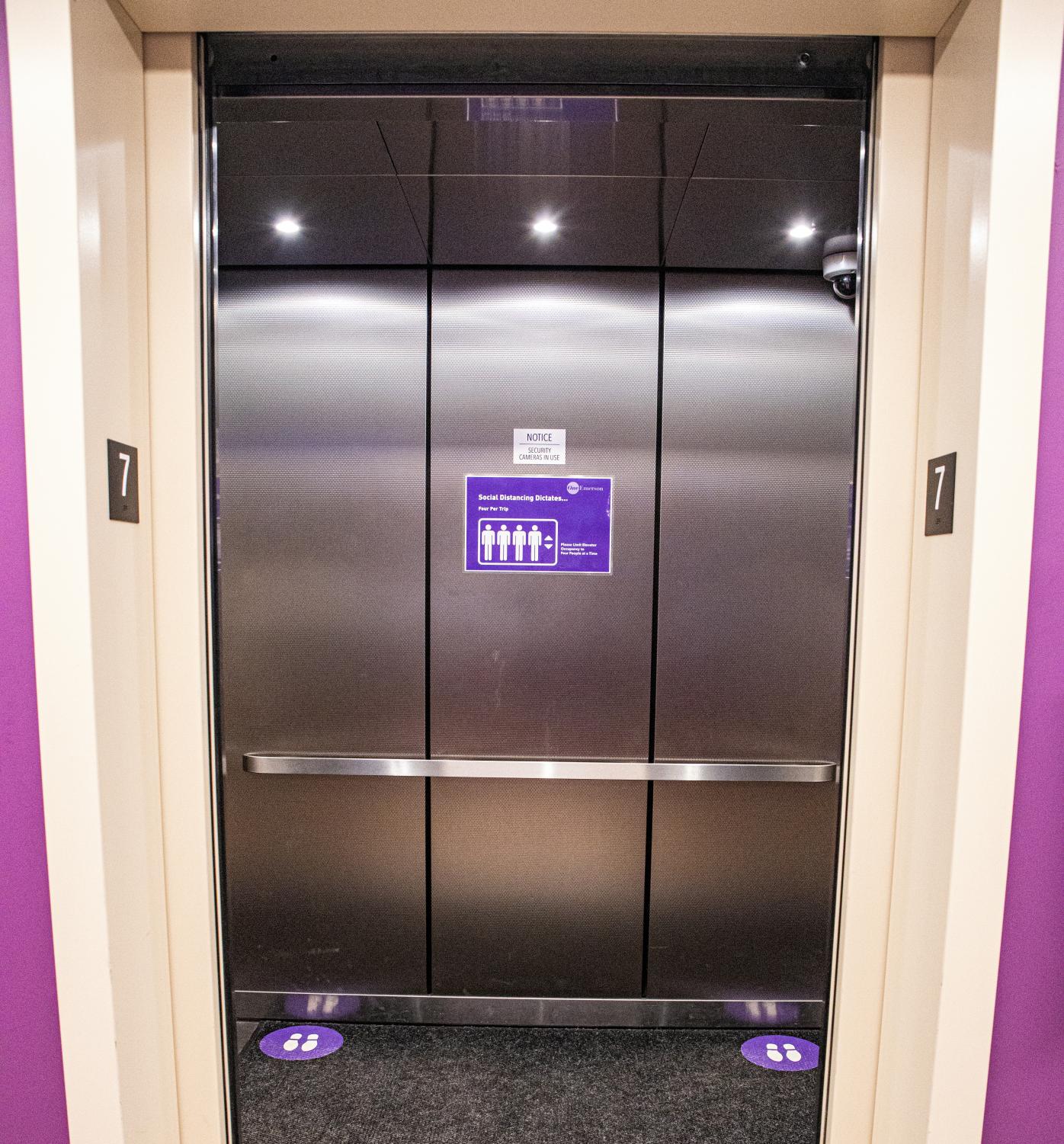 An elevator on campus.

More than a year after a student filed an accessibility request to install audio cues in on-campus elevators, which would announce the direction the elevator is moving and the floor it is on, Emerson added the cues to the remaining four buildings on campus without them.

The audio cues were installed in the front entrance elevators of the Walker Building, the Tufte Center, the Union Bank Building, the Ansin building, and activated in the Little Building in a project that ran from the first week of December to mid-January.

The elevator company Delta Beckwith installed the audio cues after money from the operations budget was set aside to fund the project, said Duncan Pollock, interim assistant vice president of facilities management and campus services.

Elevator audio cues announce the floor numbers and the direction the elevator is moving in, often with the aim of assisting those with low vision or blindness.

“Elevators really should have in them for those who are visually impaired,” Pollock said. “We put it up as a priority, we found the money to do it, and we were able to get our elevator company to change almost all of them on campus.”

Currently, every building on campus has elevators that are outfitted with audio cues. The two-stop elevator in the dining center and the freight elevators are the only ones not updated.

During the renovations of the Little Building in Fall 2019, audio cues were installed in the elevators but were not activated until this year, Pollock said.

“There wasn’t a reason why they weren’t activated,” he said. “They just didn’t do it when they had redone the elevators.”

Dylan Rossiter, a senior journalism major, filed the request in Fall 2019, after experiencing difficulty navigating the elevators due to his legal blindness. (Rossiter serves as The Beacon’s current Operations Managing Editor). Rossiter has a rare degenerative eye disease that impairs his vision.

“When I would go into 2B and notice that it’s fully compliant and announces everything and announces what the direction of the elevator is, what floor it’s getting off on, and then to not have that same experience [elsewhere] was really upsetting,” he said. “It actually created quite a bit of anxiety for me when I would go to classes for the first time or get into a packed elevator, particularly because I wouldn’t really be able to push what button, and I wasn’t sure what floor I was getting off at.”

After finding the elevators on campus had inconsistent accessibility, Rossiter contacted Director of Student Accessibility Services Diane Paxton about the need for elevator cues on campus.

Along with requesting audio cues to be installed in every elevator on campus, Rossiter included requests for increased font size on signage in the Dining Center and greater accessibility throughout dining services for students with disabilities. Aside from the audio cues, these other requests remain unaddressed.

“They dragged their feet,” Rossiter said. “It may not be particularly SAS who dragged their feet, because we have to be aware of the … resources that an office with three people simply does not have. They’re constantly putting out fires as opposed to being proactive and efforting solutions that actually make our campus more accessible.”

SAS currently has three staff members and two graduate assistants who operate the entirety of students’ accessibility in the classroom and on campus.

After filing his request and seeing no changes, Rossiter said he felt discouraged.

“When you submit a request and you go into a meeting with dining services and all of these things are said that are going to happen and nothing ends up happening, or you go in and you file a request about these elevator cues and nothing really happens in a timely fashion, it discourages students from continuing to file, because why waste your time doing that if it’s not going to happen in the first place,” he said.

Paxton and Harper McKenzie, the president of Access, the college’s student disability union, began presenting the need for elevator audio cues to the Accessibility Advisory Board last spring.

While Pollock said that his department made outfitting the elevators with audio cues its “top priority,” it took more than a year after the request was filed to come to fruition.

“The fact is also not lost on me that this request was filed in Fall 2019 and we are only now seeing this happen in Spring 2021, which is deeply, deeply concerning,” Rossiter said. “It’s exhausting and also alienating …  you don’t feel like you want to be a part of this community because they haven’t valued what you have said.”

Paxton said the approval for audio cues was delayed due to the pandemic.

“It still took this long because when COVID hit [and] so many other things had to be managed that it didn’t stay on the front burner as much as it should have,” Paxton said.

The push for audio cues was brought up again during an Accessibility Advisory Board meeting in October 2020 and was approved to be implemented over the winter break.

“We very much appreciated the students stepping in and advocating and helping us advocate for that new level of access that benefits everyone in the community,” Paxton said.

Rossiter said he continues to feel frustrated with the lack of action from the administration to create a more accessible campus for Emerson community members.

“Every time it’s gotten better it’s only because students have complained about it and to that end, it’s always taken far longer than it should,” he said. “It definitely makes me feel like I’m not valued or my concerns are not valued.”

The installation of audio cues follows a history of students on campus pushing for a more accessible campus. Last spring, a push button was installed at the Walker Building entrance on Boylston Street after Access advocated for it.

Pollock said his department will also outfit every elevator on campus with braille. The completion date for this has yet to be determined, according to Pollock.

“Everyone should have equal access to all the buildings,” Pollock said. “We have done a lot over the past few years and we will continue to address some of these things as we go along.”

Rossiter said the responsibility of Emerson’s campus accessibility should not fall to students.

“[Emerson] shouldn’t be burdening students with making our campus more accessible,” Rossiter said. “We should hire somebody whose literal job is to make the campus more accessible. That deep-seated ableism we can’t really correct in a semester, we can’t correct in a year but there are actionable steps that can be taken to create a more accessible community that is simple stuff like audio cues in an elevator or push buttons or increased font signage. These things aren’t hard. ”

Rossiter, who rarely participates in the editorial process, did not have any input on the content of this story,