Award winning journalist and alum returns to Emerson as professor 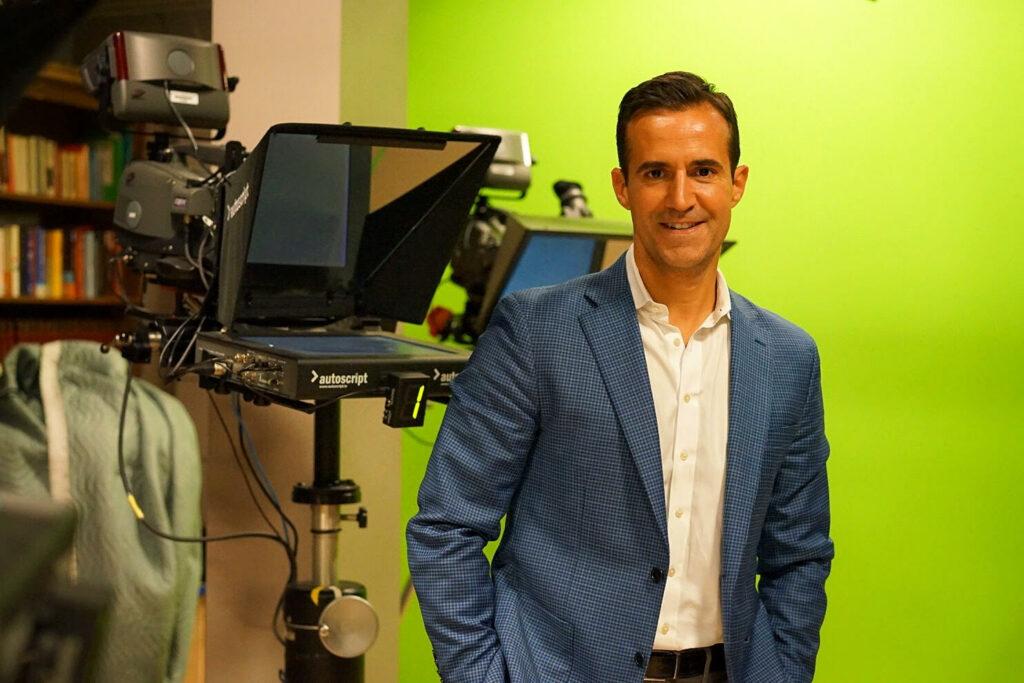 Alumus David Wade '95, winner of 23 Emmy awards, is back at Emerson as a professor. Shiyu Pan / Beacon Correspondent

When working for local TV station WBZ in 2013, David Wade ‘95 received a call in the middle of the night telling him to go straight to Watertown—the police were searching for the suspects who detonated two homemade bombs at the finish line of the Boston Marathon, killing three people and injuring hundreds of others in attendance.

When he arrived at the scene, the police were too busy to keep him back from the action.

“I’m like right in the middle of the scene,” Wade said. “There are police officers walking around me with rifles out in the pitch black, and I’m live on television.”

Wade still works as an anchor for WBZ and recounts that night as one of the most memorable of his journalism career.

Wade began his career at Emerson.

In 1995, Wade served as the sports editor for The Beacon. Aside from WBZ, the 23-time Emmy Award winner has worked for publications such as Boston’s WFXT-TV, WXXA-TV in Albany, New York, and WRNN-TV in Rye Brook, New York. He returned to Emerson this year as a professor in the Journalism Department to teach the next generation of reporters.

Wade teaches Electronic News Gathering TV News Reporting, a 300-level class in the Journalism Department. The class comprises 12 students who will create six or seven stories for their portfolios. Students in his class are held to the same standards as professionals in the field, Wade said. Students pitch their story ideas, shoot, write, and edit their own work, then present their stories to the class.

Wade grew up in Tewksbury watching WBZ with his family and said he particularly enjoyed the sports segments. From then on, whenever playing sports or games with others, Wade would become their personal announcer.

“I always loved being the voice in front of people,” Wade said. “When I was playing basketball out front with my friends, I was always like, ‘Wade has the ball, Wade shoots!’ When we had family holidays and we were playing Trivial Pursuit I’d always be announcing it with a wooden spoon.”

After finding his love for broadcasting, Wade set his sights on Emerson’s journalism program. Wade recounted sitting in The Berkeley Beacon office late at night, listening to music, laughing with staff, and trying to put together the newspaper, citing these memories as some of his favorites as a student at Emerson.

“One thing that sticks out from my time at Emerson was getting to meet people at The Beacon that maybe I wouldn’t have normally had a chance to get close with, because they were print journalism majors and I was broadcast journalism,” he said. “So I got to meet some really awesome people.”

Wade also collaborated with other broadcast journalism majors while in school. He commuted to school by car, which allowed him to drive with his friends around Boston to cover stories.

“Me and my other friends from my class would constantly take my car out to go shoot stories,” he said. “I remember driving down to Foxborough to shoot stories inside the Patriots’ locker room.”

Following his graduation, Wade gained more experience as a reporter while working at New York TV stations such as WRNN-TV and WXXA-TV. He moved back to Boston in 1998 to work at WFXT-TV, and WBZ hired him in 2007, where he still works as an anchor.

Wade now shares his knowledge and experience in the field with journalism students at Emerson. He said that he has visited classrooms as a guest speaker in the past but always wanted to teach his own class to make deeper connections with the students.

Journalism Department Chair Janet Kolodzy said she feels very excited to have Wade as a part of the journalism faculty. She also said Wade’s writing is well-regarded, which is something the department likes to focus on in print and broadcast classes.

“As someone who values writing a lot, his writing expertise is an added plus,” Kolodzy said.

Krystin Beaulieu, a junior journalism student in Wade’s class, said she believes that she is gaining experience here that will benefit her future career.

“I think it definitely helps that he currently works in the field,” she said. “He’s very open about what we’re going to see, or what we’re not going to see if we’re ever doing what he does. I love this class—this is my favorite class. I have an 8 a.m. before this and it’s tough to get up and get myself to school, but I always look forward to this class.”

Aside from the class being enjoyable, Beaulieu also commented on the effectiveness of Wade’s teaching style.

“He always makes sure to tell us something nice about ourselves when it comes to reviewing stuff that we’ve done in class, but also really critiquing what we’ve done as well,” Beaulieu said.

Wade said he is thrilled to be returning to Emerson to teach.

“There is a special spot in my heart for this school,” Wade said. “I feel like the career that I have is because of the experience that I got here at this school. My whole career, I’ve thought that a big portion of who I am is because of Emerson College.”