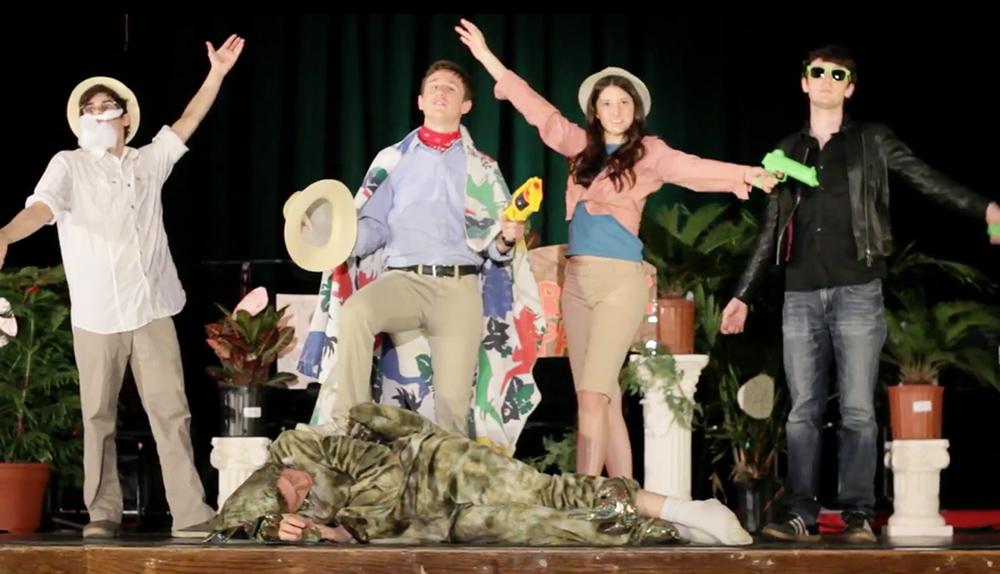 If you turn on The Emerson Channel, one can expect to see 10 original shows encompassing a variety of genres, from news, to sports, to lifestyle, and more. Pair these programs with The Emerson Channel’s affiliates — Emerson Independent Video, EIV News, National Broadcasting Society, and The EVVY Awards — and Emerson students have an abundance of opportunities to explore film and broadcasting at their disposal. But none of these programs allow students to experience narrative television.

When three Emerson students decided they wanted to explore serial storytelling, but said they had no opportunity to do so through The Emerson Channel or its affiliates, they took matters into their own hands. Seniors Jamiesen Borak and Jesse Sheehan and junior Shiraz Dhume, revisited an unfinished narrative television project started over three years ago called Misdirection.

Over the course of five episodes, the last of which was published on YouTube on Nov. 27, the show tells a classic underdog story of a drama teacher who hopes to put on a high school production of Jurassic Park: The Musical.

“Emerson isn’t a school that focuses on narrative television,” said Borak, a visual and media arts major, “so it was a little difficult to get back into the swing of working on a narrative project.”

Misdirection follows Mr. Frontiér, the school’s new theater instructor, and his 4-person cast through a chaotic production of the outlandish musical, including auditions, a cast bonding party that takes a turn for the worse, and a love triangle between male lead Sean, female lead Autumn, and stage manager Lauren.

“It was always something that’s been in my head,” Borak said. “I’ve always wanted to finish the series and get the complete story out there.”

And the Misdirection team was determined to create an original series that was atypical of Emerson student filmmakers.

“When you’re doing a project on your own terms, you’re not bound to any rules,” said Dhume. “We were just trying to be the best we could be.”

Last spring, the Misdirection team hosted a successful  Kickstarter campaign that raised $3,520 for the series, and Borak’s story finally started to come to life. He finished writing the rest of the episodes with Dhume, and being a student at Emerson turned out to be a huge help. From actors to cinematographers, the team had everyone they needed for a successful production at their disposal.

“The people were the biggest resource at Emerson,” Borak said. “The reason you go to film school is in order to create a network of people who work in the industry and who have skills in that field.”

But even with adequate funds and a fully supportive cast, the three executive producers faced a number of obstacles in producing the series. For instance, since the cast and crew consisted entirely of students, and they decided to film at Cheshire High School like the original episodes, a major challenge of producing the series was finding time to shoot it. They ultimately had no choice but to film all 54 minutes of footage over the span of one weekend, right after finals in May 2013.

“It was definitely such a time crunch,” Dhume said. “Each night we only got maybe an hour of sleep. There was one night where I got a half hour of sleep and then I had to go back out and film more.”

According to Borak, he and Sheehan, a fellow visual and media arts major at Emerson, have been best friends since middle school, after growing up together in Cheshire, Conn. and collaborating on video projects. During the summer of 2010, after graduating from Cheshire High School, Borak co-wrote Misdirection with Kelly Marchand, an Emerson student at the time. Then Borak and Sheehan produced two episodes with some friends before the team’s departure for college forced them to give up the project.

At Emerson, Borak and Sheehan befriended Dhume while  working on a 15-episode web series together called The Byte, which Emerson Independent Video picked up for the 2012-2013 school year.

But amid their involvement with Emerson Independent Video and The Emerson Channel, they decided to pursue a narrative television style, and eventually to rewrite and complete the remaining episodes of Misdirection.

The completion of the series brings Dhume back to 2010, when he viewed the original episodes of Misdirection about two years before he was involved.

“When I saw it, I was so stoked to see my friends creating a professional-looking production,” Dhume said, “so I’m hoping that people will be surprised at the quality of this production, considering we’re students and we raised all the money on our own.”

Although all episodes have been published, Borak, Sheehan, and Dhume still have a few weeks of work ahead of them. They’ll continue to advertise the series, and send out packages to their Kickstarter donors, which include DVD copies of Misdirection, three-page Jurassic Park: The Musical playbills, posters, T-shirts, and more.

Andrew Doerfler, Managing Editor, did not edit this story because he donated to the Kickstater campaign and is friends with Borak.