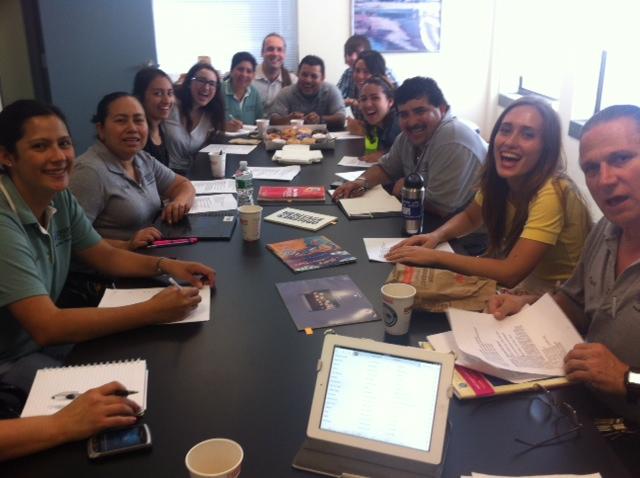 The steel exterior has been wrapped in sticker sheets of 500 pages’ worth of writing in Spanish and English. The hashtag #ProyectoCarrito is printed on its rear window.

Soto is one of the authors of the stories pasted on the van, part of Proyecto Carrito — an endeavor between undergraduate students, faculty, and maintenance workers to share the story of Emerson’s translingual class, which started three years ago, and is taught by Tamera Marko and Eric Sepenoski, professors in the writing, literature, and publishing department.

“When we write, it’s like freedom,” said Soto, who has been a student in the class since its inception in 2011. “We’ve learned the power of writing.”

On March 15, Soto, Marko, Sepenoski, and maintenance worker Mario Ernesto Osorio will get Proyecto Carrito’s wheels rolling and embark on a 935-mile, 14-hour  road trip from Boston to the National Conference on College Composition and Communication in Indianapolis, said Marko. Undergraduate students Sandrayati Fay, Bianca J. Padró Ocasio, Andrea Gordillo, and Ryan Catalani, an editor at the Beacon, will also be aboard the minivan.

The three-day conference advocates writing as an empowering rhetoric for communities, and as a tool for enhancing representation of a diversity of races, cultures, languages, identities, and institutional roles in higher education, according to its website.

Osorio will present his writing at the conference, addressing an audience in English for the first time, he said.

“I’m nervous, but I want this experience,” said Osorio, who came to the US from El Salvador 20 years ago.

His work is about immigrating to the United States to support his family, learning English, and the relation between education and immigration reform, he said.

This year the translingual class was accepted to four academic writing conferences, to which they applied last year, said Marko. Along with the Indianapolis event, they will attend the Fourth Annual First Year Writing Program Showcase at Emerson April 23, the 16th Annual Biennial Rhetoric Society of America conference May 24-26 in San Antonio, Duke University’s May 6 writing conference, and the July 15 Medellin conference in Boston. Members of the class will drive the carrito to all conferences, said Marko.

“The workers at Emerson have narratives that aren’t published or represented,” said Marko, “but we’re finding a way to be inclusive and for audiences to approach our text and read it in a different way.”

Sepenoski said Proyecto Carrito drives rhetorical mobility — the potential for a person’s ideas to move across boundaries. He said the students’ experience with this concept differs greatly from the workers’ because while students are rewarded for sharing their narratives, workers might be afraid of communicating their histories for fear of job security or deportation.

The personal essays are about borders — both tangible and intangible, in the context of U.S. immigration policy, and how communities cross, overcome, or are blocked by these margins, said Marko.

“The workers are part of our community,” said Marko. “We decided we needed to share our work on our own terms. With Proyecto Carrito, we can literally drive our own narrative.”

Fay, a student in the translingual class, said through academic writing members have told narratives that often slip through the cracks in institutional realms.

“Proyecto Carrito is about telling a story to embrace the complexity of where we come from,” said the sophomore performing arts major. “It tells the story of our class and the struggle we faced in uniting students and workers. We are finally making our story public. Everyone is proud of it.”

Four years ago, Soto and some of his colleagues approached Emerson’s Office of Diversity and Inclusion and asked for an English language class  The request evolved into the translingual course now held every Wednesday at 11:30 a.m. in a conference room on the 10th floor of the Walker Building, he said.

The maintenance workers in the class are all immigrants from Latin America who came to Boston because they were forced to flee their home countries due to poverty and war, said Marko.

Soto’s storyline traces from Guatemala to Boston. He moved here 21 years ago, he said, and in the past three years he’s developed as a writer in Spanish and English.

“We talk about how writing can change the world,” said Sepenoski, “but this has moved from theory and dreaming to something very real — the car with students’ writing all over it.”

Managing editor and design director Ryan Catalani did not edit this story because he is a project co-director of Proyecto Carrito.