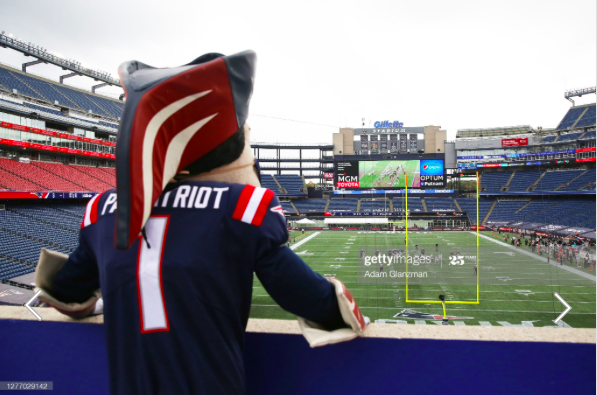 After last week’s close loss vs the Seahawks saw a heavy air attack, the New England Patriots turned to their running backs to drive the Patriot bus this week. And boy did that work out well.

The Patriots got back in the win column and handed the Las Vegas Raiders their first loss of the season with a 36-20 victory Sunday afternoon. Led by running back Rex Burkhead’s three touchdowns, New England got quite the versatile performance from the running back. Burkhead had 91 total yards and with two rushing touchdowns while the other was a receiving touchdown.

“Burky had a game. He had a day,” said Patriots quarterback Cam Newton afterward. Burkhead wasn’t the only New England running back who had a solid game, in fact, the entire group was the key factor on offense.

Running back Sony Michel ran for a massive 117 yards on just 9 carries, including a 48-yard big boy run in the third quarter that led to a Patriots score.

“Sony did a lot of heavy lifting,” said Newton when discussing Michel’s performance.

One more running back to name who had a big day, undrafted rookie J.J. Taylor. Taylor provided a quick boost when the New England offense was stagnant early on in the game and contributed 43 rushing yards to the Patriots 250 total rushing yards.

Regarding the Patriot passing game, Cam Newton came back down to Earth yesterday after his electric play last Sunday. Only throwing for 162 yards with one touchdown pass and one ugly interception, Newton had a pedestrian 73.8 quarterback rating.

Talking about the interception, Newton said it was “completely my fault.” But after the quarterback’s ill-timed pick, New England went on to score on every offensive drive they had.

“We have so many different ways to beat you,” said Newton. Indeed they do, and New England showed it today not just on offense, but on defense.

Defensively, the Patriots had another up and down game. Some big gains by the Raider offense and star players like cornerback Stephon Gilmore committing a not so helpful pass-interference call near the end of the first half led to a Vegas touchdown, cutting the New England lead to 13-10.

However, the defense did cause three Raider fumbles, including one strip-sack fumble in the final frame which Patriots defensive end Deatrich Wise Jr. recovered in the endzone for a touchdown. Along with that, New England held Las Vegas’s top receiving target, Darren Waller, to just 2 catches for 9 yards. The Patriots did a great job taking away one guy’s impact on the game, especially a good tight end in Waller who had a dozen catches for over 100 yards and a touchdown last week vs New Orleans.

With the win giving them a record of 2-1, New England heads out to Arrowhead Stadium to face the defending Super Bowl Champion and still quite good at throwing that football object to other people Kansas City Chiefs Sunday afternoon. Kansas City will be another battle for New England, but knowing they can attack from a lot of areas just like Newton said, this upcoming game will be a good one for the Patriots. Get the chips and salsa ready, folks. On to Kansas City.