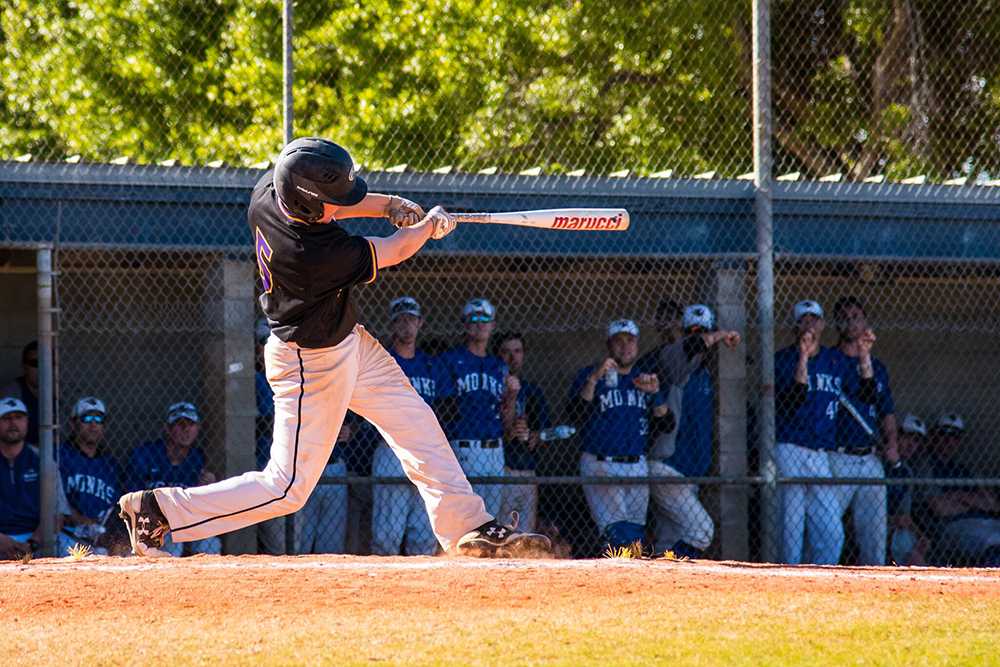 The baseball team seeks improvement as it heads into a third season with head coach Nicholas Vennochi after winning just one of their 16 conference games played last year.

As he enters his third season, Vennochi said winning conference games is the team’s top priority.

“Our goal is to be competitive in every NEWMAC game,” Vennochi said. “We want to show them that we are better and are improving.”

The team brought on 10 freshmen in the offseason. Freshman infielder Joe Colucci said that the new players have already helped bring a culture change to the team.

“If you asked some of the upperclassmen, we have already changed the culture a good amount,” Colucci said. “We have a lot of kids who are ready to win, ready to improve on last year. The freshman class is extremely excited to get started.”

The coaching staff will focus on improving all aspects of their game, but pitching specifically was a rough spot for the team last year. Last season, the team allowed 4.81 walks and 10.58 hits per game, but Colucci said pitching coach Kendall Chaves wants to emphasize accuracy this season.

“[Chaves] is focused on making sure our pitches hit our spots,” Colucci said. “We don’t have many overpowering pitchers, so we’re going to have to get people out in a different kind of way, as opposed to striking everybody out.”

Vennochi explained a few specific strategies he pushed for the team to learn.

On offense, the Lions totaled 6.65 hits per game last season but hit only two home runs all season. In addition to an aggressive attitude on the mound, Vennochi said the team needs aggression at bat as well.

“At the plate, [we want to] attack the first fastball we see,” Vennochi said. “With that, we’ll hopefully force issues and cause the other team to make mistakes.”

In December, the team hired Logan Gillis as the hitting coach. Gillis played baseball at Northeastern University in his freshman year of college and transferred to Bentley University, where he started in every game and led the team in total hits in his two seasons.

“We are all very excited about what coach Gillis brings to the table,” Colucci said. ”For the month that I have been working with him, I am already a better hitter. We are very excited to spend the rest of the season with him.”

“Coach Gillis has implemented some good [strategies],” McCahan said. “We have definitely improved in situational hitting, and we’re starting to hit with more power.”

Colucci said the team intends to stop overthinking on defense after recording 73 errors—2.36 per game—last season.

“We want to focus on making the easy and routine plays,” Colucci said. “We wanna be able to make the plays we think we should be making.”

“Communication is always key in preventing mistakes,” Vennochi said. “We want to eliminate the effect when mistakes seem to keep piling up on top of each other.”

One key factor that Emerson lacked last year was a home field advantage. With only eight home games played at Campanelli Stadium in Brockton, Vennochi said it disadvantaged the team.

“Not having a consistent home has always been one of our disadvantages,” Vennochi said. “Campanelli was awesome for us, but because of weather, we weren’t able to be out there as much as we wanted.”

Despite the issues with their lack of a home field last season, the team is hopeful for their new location at St. John’s Prep in Danvers. The field is a little less than an hour away from campus, but Colucci said the team is unsure of how to attract fans to the games.

“We’ve been working hard to get [Emerson Channel Sports] out there [to cover games],” Colucci said. “If the school is willing to, we would love to have a fan bus.”

Colucci said the team hopes to surprise the competition and share a similar narrative with the men’s basketball team, which ranked sixth at the beginning of the year but finished the season as NEWMAC champions. The baseball team ranks eighth in the NEWMAC preseason coaches’ poll.

“I’m sure we won’t be ranked very high [in the conference] this year,” Colucci said. “But we would like to make the NEWMAC playoffs at the very least. We want to make some noise. upset some of these powerhouse teams, and hopefully get some of the wins that nobody thinks we are going to get. It’s well in our ability to beat these teams if we play our best game.”

The Lions lost 9-4 to Rivier University on Thursday, March 14.

The Lions’ next game is against Lasell College on March 19 at 7 p.m.