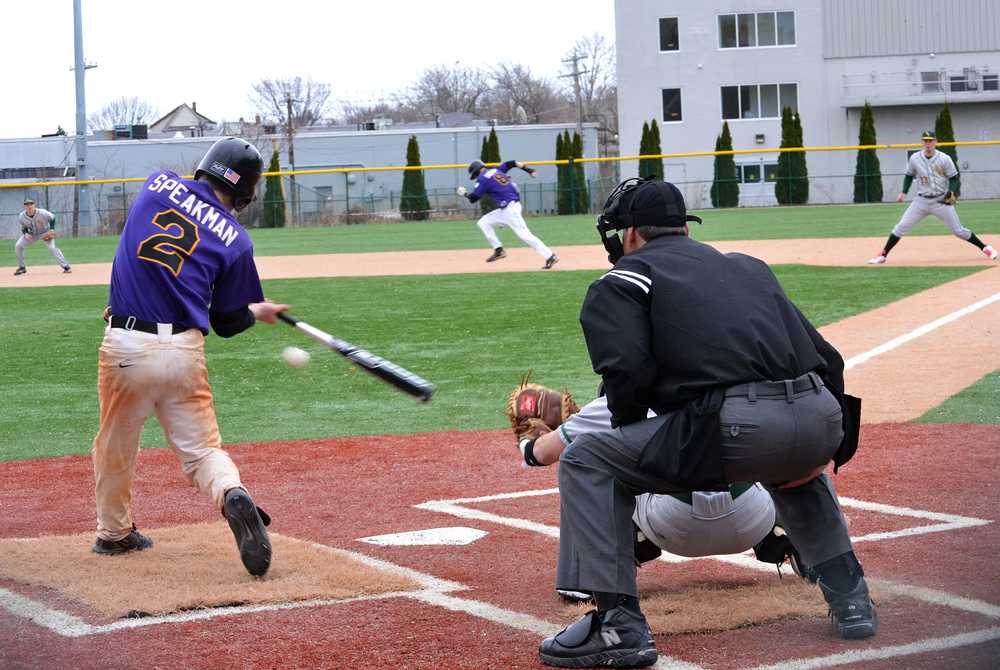 Geoff Lopes trotted out to the mound to talk with starting pitcher Ben Quick. Quick had just committed an error leading to a run, and the Emerson baseball team had fallen behind Anna Maria College 5-0.

Sloppy play by Emerson in both games of the doubleheader against Anna Maria put the Lions down early and gave the AmCats the 5-4 and 7-4 wins. The Lions had difficulty finding its rhythm early on, and constantly played from behind.

“Of course it was an important game that we would’ve liked to win,” said Quick. “It was the conference opener. We did a good job battling back, but we made one too many mistakes.”

Once the AmCats jumped out to a 5-0 lead in the third inning of the first game, head coach David Hanley gathered his players on the mound. He was soon followed by Lopes, who held his own conference with Quick.

“I told him to keep his pitches down,” Lopes said. “It was a tense moment for him. I tried to tell him some jokes, build up his confidence.”

Though Emerson came close to tying up the first game after bringing in four runs over the next couple of innings, the AmCats held on for the win.

“It was frustrating,” Quick said. “We were throwing around the ball — and when I say we, I mean myself, too — and making errors.”

He was replaced by freshman Julian Rifkind at the top of the fifth inning.

The second game of the day started similarly, with Anna Maria taking an early lead. Though Emerson was behind by a smaller margin and had chances to tie it up, a few mistakes put its chances of victory out of reach.

“One or two plays gave [Anna Maria] the edge and decided the game,” Lopes said. “We made some errors, some mental mistakes.”

Sloppiness plagued the Lions on the basepaths as well as in the field. Down by one at the bottom of the fourth inning with two out and the bases loaded, Emerson had the chance to tie the game with Lopes at bat. Center fielder James Sullivan attempted to score from third base on a wild pitch, but he was tagged out at home, ending the inning. The AmCats prevented the Lions from scoring through the rest of the game and tacked on a few more runs in the last innings, finishing with a 7-4 final score.

Hanley said that while his team was hitting well, the Lions’ errors cost them in the end.

“We made some bad decisions on bases,” the coach said. “We had a few clutch hits, but not enough. We were thrown out at home plate twice and once at third. We were communicating fine, but I don’t think we’ve learned how to win.”

The Lions, who are now 5-14 overall and 0-2 in the GNAC, will take on first-place St. Joseph’s College of Maine on Saturday.